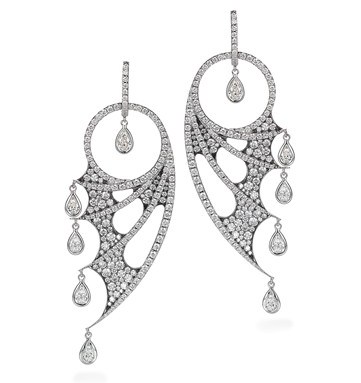 In addition to bolstering his namesake brand, the rock ’n’ roll-inspired British fine jeweler who counts Madonna, Christina Aguilera and Jennifer Lopez as fans has been named creative director of Garrard, the 286-year-old London jeweler famous for outfitting the British royal family in its patrician styles. Garrard’s past commissions include the engagement ring for the late Diana Spencer when she got engaged to the Prince of Wales.

Like Stephen Webster Ltd., Garrard is controlled by Ron Burkle’s Yucaipa Cos., which acquired a stake in Webster’s 20-year-old jewelry brand last year. Garrard’s former creative director was another rock ’n’ roll scion, Jade Jagger, who exited the company in 2007.

While selecting Webster as creative head of Garrard may stir the mental image of edgy jewelry that pushes the limits, think again. Webster said he plans to honor the storied Garrard pedigree while adding a dose of excitement. The avant-garde and sometimes provocative pieces will be found at Webster stores.

“It’s kind of a strange one for me,” admitted Webster of taking the creative helm at Garrard. “Fifteen years ago when I was trying to sell my jewelry in England, no one was interested….Britain was very much into these diamonds and pearls and my big cocktail rings didn’t have a place. The one place that gave me a shot was Garrard,” he recalled. “They really were very enthusiastic about my product.”

Webster plans to play on Garrard’s history, while offering something fresh as well. “There is an amazing history and you can go to the Tower of London and see history, but I want it to be a place where you can go in and be surprised and excited,” he said.

Terri Eagle, president and chief executive officer of both brands, said there are also plans to open a Manhattan flagship for Garrard in addition to its stores in Los Angeles and London.

“It just seems like an absolute natural to tap into his talent,” said Eagle of Webster’s appointment at Garrard. “What he will be able to do with the Garrard business is to modernize it and to inject a fresh feeling.”

Eagle has also tapped Laird + Partners to develop creative campaigns for both the Stephen Webster and Garrard brands. Webster is headed out to Los Angeles to shoot his new campaign with Aguilera and photographer Craig McDean this week. Aguilera, a longtime friend of Webster’s who is said to be a part owner of the Webster brand with husband Jordan Bratman, was the inspiration for the designer’s silver jewelry line. She will now be featured in ads for both Webster’s silver and gold collections and the new campaign will be a departure from the Forties Hitchcockian feel of the last one, given Aguilera’s new modern look. The new Webster campaign will bow in April and the Garrard ads will debut in fall of next year.

As for the Webster brand, there are plans to open a 1,100-square-foot London flagship at 93 Mount Street, with neighbors such as Balenciaga, Christian Louboutin and Marc Jacobs. The store will replace the brand’s far smaller unit on Duke Street and will be a haven for the vision of Stephen Webster.

“We’re probably way overdue to have a flagship store,” said Webster, who has more than 20 boutiques in places such as Seoul, Moscow and Saint Petersburg, Russia, in addition to distribution in Neiman Marcus, Bergdorf Goodman and Saks Fifth Avenue in the U.S. “The one thing that has been missing for us is a really flagship destination for Stephen Webster. We need to express what the whole brand is about.”

Both Webster and Garrard also have two new executives on board. Clare Hose, who was most recently supply chain director for DeBeers Diamond Jewelers, has been named chief operating officer and Carrie Niese, who had stints at John Hardy, Escada and Harry Winston, has been appointed director of marketing.

Eagle said she is aiming for significant growth for both brands, but declined to provide sales figures.