The lines were mostly filled with resellers, who will have to come back every day to get new product. 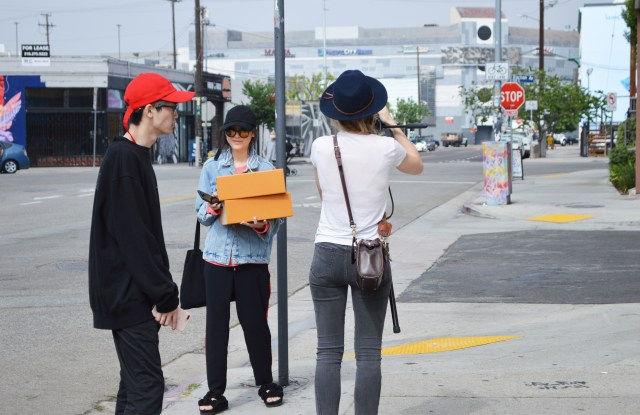 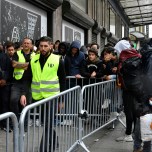 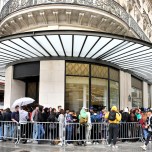 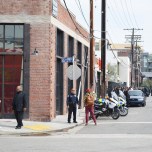 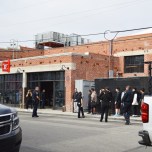 Megacrowds — many destined to be disappointed — greeted the long-awaited arrival of the Louis Vuitton x Supreme collaboration in pop-up shops around the world on Friday.

Just as Michael Burke, chairman and chief executive officer of Louis Vuitton, previously told WWD, the brand revealed the location of the pop-ups on Instagram only one day, or sometimes hours, before the release.

“There will be no marketing and no press release. We won’t be pandering to the customer. It’s all about peer-to-peer communication. We provide a very minimum amount of information and let the people judge us from there,” Burke said.

As reported, the collection, unveiled at Paris Men’s Fashion Week in January, is being sold exclusively through eight pop-ups in Paris, London, Miami, Los Angeles, Tokyo, Beijing, Seoul and Sydney. With the exception of the Miami pop-up, located in an exhibition space on the third floor of Vuitton’s Design District store, the stores have no prior connection with either brand. The Sydney pop-up is located at 95 Roscoe Street in Bondi Beach, while the Tokyo space opened in the Minami-Aoyama district, where more than 7,000 people lined up outside starting from the late hours of Thursday night.

At 8:30 a.m., only 400 of those waiting were given tickets, allowing them entry to the store sometime within its 11 a.m. to 8 p.m. opening time. Two Chinese shoppers who emerged from the store with large shopping bags at around 11:45 a.m. said they had been in line since 6 a.m.

A spokeswoman for Louis Vuitton Japan declined to comment on how sales of the collection had been and which items were most popular with customers in Tokyo.

In London, die-hard shoppers and ambitious resellers spent a sleepless Thursday night on the sidewalk outside 180 The Strand, a sprawling presentation space that the British Fashion Council uses as its official show venue.

The mostly male, multicultural shoppers — most were Millennials, some were teenagers — were waiting to snap up Supreme box logo T-shirts and the Vuitton monogram hoodie, but not all of them were pleased with the merchandise on offer.

The collection included six styles of handbags, including a backpack, red Supreme messenger bag and a fanny pack. Co-branded items included a denim jacquard baseball jacket and a hoodie with the classic Louis Vuitton monogram pattern.

“They didn’t have half of the collection. They didn’t have the red fanny packs or the denim jacquard jacket that I wanted,” said one shopper, Calum Callaghan. “I’m coming back tomorrow to see if they have the other pieces available.”

The hours-long line went around the block, down the hill toward the Thames, across the street and back up the hill. Some had been waiting since 9 p.m.  Thursday and security was tight.

The line was at least double the size of the one for a Dover Street Market sample sale, which took place in May at the same venue. “It’s busier than other Supreme drops I’ve queued for before,” said one male customer, who declined to give his name.

“Most of the people are lining up for Supreme. Supreme is quite cheap. It’s nothing like Louis Vuitton prices. But I guess this is a reasonable price to spend for people who buy Louis Vuitton,” said the shopper, who was dressed in a Supreme hoodie and a baseball cap.

Some shoppers were pleased with their pickings: They stepped out of the glass doors of the venue wearing the red box logo T-shirt that was priced at 350 pounds, or $454, or the red Vuitton monogram leather jacket that cost 3,250 pounds, or $4,215.

Others waited patiently for the resellers to emerge. One young shopper stood with his personal, beefy security guard and asked one reseller to call out his price. “I would pay anything. Just tell me,” he said. Other customers wore fanny packs and pulled out rolls of cash — in plain view — as they watched the resellers emerge from 180 The Strand with their loot.

“I think the most popular items will be the T-shirts and the waist bags, the cardholder and the hoodie,” said an avid Supreme customer, Terry Du.

The London pop-up will be open through July 21 and the brand said it plans to release new items every day.

In Paris, a crowd braved incessant rain showers, with the most die-hard Supreme fans getting in line as early as 8 a.m. on Thursday, according to Babacar Cisse, an assistant trader who was number 10 in the queue. He had arrived at 11 a.m. Thursday and said that, at around 6 p.m., one of the organizers made a list of everyone’s names and told them to come back in the morning. When he returned at 6.a.m. on Friday and joined the front of the line, there were already around 200 people in the queue, he said, with some having been there all night.

The Paris pop-up was in a vacant space on Rue Boucher near Louis Vuitton’s headquarters. The queue snaked around the opposite building and up the sidewalk of the Rue de Rivoli.

Cisse managed to bag two of the most in-demand items, a red box logo hoodie and T-shirt. He also bought a wallet, splashing out around 2,700 euros. Those items are said to have sold out within the first 60 people. “This is the one everyone wants, most of people came for the T-shirt because it’s Supreme,” said Cisse, taking the garment out of its box as admirers gathered round to take photos. “A Chinese guy just came up to me and offered me $3,500 for the sweatshirt, and the T-shirt is selling online for $2,000.

“There’s a jacket that people are selling for $10,000 online,” added Cisse, who had taken a couple of days off for the event, saying, “I organize my calendar around the releases.”

The organizers were letting people in “five by five,” he said, with each person allocated a personal shopper who then presented the collection. “We weren’t allowed to touch the racks, only the personal shopper could.”

Nearby, toting a small yellow bag containing two wallets, a disappointed-looking Ma Biao said: “It wasn’t worth it. First of all, Louis Vuitton is not a brand for me. What I’m interested in is Supreme, it’s a skater brand that I love. But the more affordable pieces, the T-shirt, the hoodie had all gone. All there was were leather goods, trenchcoats, scarves. I think they’re bringing it all out bit by bit.” He had joined the queue at 3 a.m. “There were already loads of people.”

The Paris store will stay open through July 27.

After all the chatter from brokers building up buzz about downtown Los Angeles’ moment for luxury retail, Supreme and Louis Vuitton finally gave the area something to talk about when the two tapped a corner of the Arts District neighborhood for their collaboration’s drop. Leaks on the Los Angeles address quashed social media rumors the pop-up would be at the Vuitton store on Rodeo Drive.

“We just got some friends, you know, people who keep up,” Brian Taylor said of how he found about the location ahead of its official announcement. “We’re from L.A., so we know the area.”

The south Los Angeles resident said he had been waiting in line since about 11 a.m. Thursday, receiving a ticket from a Vuitton employee. All ticket holders were photographed and entered into the company’s database, Taylor reported. His efforts paid off with a badge of honor: the mustard-colored Louis Vuitton bag carried by those able to get into the store as groups of onlookers watched from across the street.

“I got what I wanted — not everything because we wanted the red backpack, the red leather stuff. But they only released the black and the camo today. The only thing that came in red was the sweatshirt and the T-shirt,” Taylor said, adding he was able to snag the box logo hoodie, T-shirt and crewneck within the 20-minute time limit allotted to customers in the store.

Another young man from the area, who wished to remain anonymous, said he had been waiting in line since about 2 p.m. Thursday after hearing details from a friend.

“They had inside info before anybody else got it and was one of the first people to know,” he said before walking away hurriedly and brushing off further questions about his purchases.

JJ Liu somehow lucked out, saying he waited in line for only about two hours with no ticket. He observed some in line were tired after having waited for so long, while others chatted up pricing and the possibility of resale.

“I just talked to some people, got some phone numbers and [told] them I’m going to buy stuff,” Liu said of his experience getting into the store.

Like most, the Alhambra resident found out about the drop on Instagram, and came out of the store with a hoodie and the black leather keepall bandoulière, which is listed on the Louis Vuitton site for $3,650.

The event was hardly the spectacle of Kanye West’s “Life of Pablo” pop-up on Fairfax Avenue last year, which drew a line of fans that snaked down the street. This was far more orderly and restrained. A line was formed off a side street with officers blocking the entrance to the road and aiming to stop any loitering near the store. One officer said no ticket was required to stand in line, but the rules differed upon approaching the queue, where another official checked to ensure everyone there had a ticket. Anyone else was directed across the street.

That’s what Josh Gomez was doing as he looked across the way at the line his friend was standing in. The East L.A. resident said he heard of the drop and gave his friend the heads up, but refused to wait in line.

Plus, he added, there was really only one item he saw that drew his attention. “S–t, I only wanted the skateboard to be honest with you, but that s–t’s $50K from what I’ve seen,” Gomez said.

Indeed, the skateboard trunk bearing the Supreme and Vuitton logos with the board and accessories inside, has a reported price tag of about that.

Around 9:45 a.m. ,an officer got on a speaker system, “Gentlemen across the street,” he began before reminding them the reselling of product was being recorded and, if caught, “You will not be welcomed back.”

An onlooker from across the way launched back: “It’s inevitable.”

While there were initial plans to open a Louis Vuitton and Supreme pop-up on Bond Street in New York, Manhattan’s Community Board No. 2 unanimously denied the proposal, citing Supreme’s tendency to violate New York permit requirements and their lack of a plan to manage the crowds on a quiet, residential street.

In the past, Louis Vuitton has staggered its releases, and although there are no plans to sell the collection online or in Supreme stores, the products will be available at select Louis Vuitton stores, which will be revealed at a later date.

Louis Vuitton declined to share details on figures related to the sale, or feedback on which items sold out first.