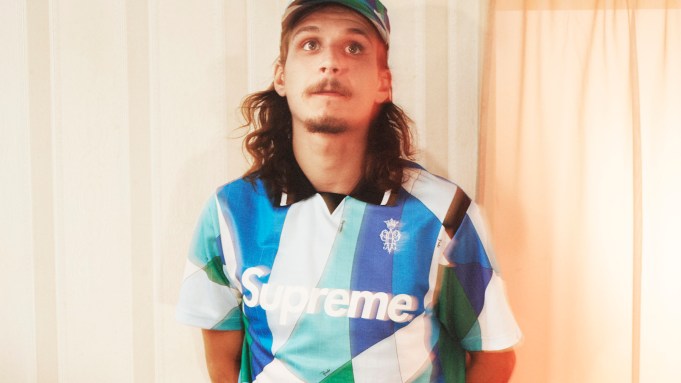 It seems that Supreme collectors will have to wait until Thursday to put their hands on one of the most rumored collaborations of the year, the one with the Emilio Pucci brand.

On Sunday, both Supreme and the Florentine fashion house posted an image on their official Instagram accounts featuring skateboarder and music producer Sage Elsesser wearing an outfit from the collaboration: jersey shorts with an elastic waistband matched with a coordinated boxy shirt, all splashed with a signature Emilio Pucci allover print in pink, white, black and electric blue.

Supreme accompanied the image shot by David Sims with a caption reading 6/10/21, which, in keeping with the American brand’s tradition, is supposed to coincide with the date of the release of the collection. More outfits are expected to be unveiled on Instagram in the next few days.

Supreme is not new to such collaborations. Last year, it partnered with Yohji Yamamoto and in 2017 with Louis Vuitton, for example.

Emilio Pucci, controlled by LVMH Moët Hennessy Louis Vuitton, has made a variety of fashion statements under a slew of designers, from Peter Dundas to Massimo Giorgetti, but is to return to its roots as a resort-focused brand. Most recently, the storied label had recently experimented with guest designers, including Christelle Kocher of France and Japan’s Tomo Koizumi, and may continue with occasional collaborations.

On Sunday, the Emilio Pucci brand was not reachable for further details about the distribution of the capsule.

Spanning more than about 1,080 square feet, the store, which is located on Corso Garibaldi, in the Brera district, occupies a corner retail space featuring six massive floor-to-ceiling windows, some of them offering a view of the Basilica di San Simpliciano, which dates back to the fourth century.

The store, which carries the brand’s ready-to-wear and accessories assortments displayed on wooden shelves and metal racks, features a wooden floor and white walls decorated by colorful murals by American pop art artist Nate Lowman. In addition, at the entrance, two joyful and ironic sculptures by artist and professional skateboarder Mark Gonzales welcome customers, while a digital photo collage created by Weirdo Dave occupies an entire wall. The same wall also hosts a selection of skateboards.

In Europe, Supreme also operates boutiques in Paris, in the Marais district, and in London in the SoHo area. In the U.S., the Supreme retail network includes units in Manhattan, Brooklyn, San Francisco and Los Angeles, while in Asia, the brand has six shops in Japan.

At the end of last year, VF Corp, the Denver-based group parent to The North Face, Vans and Timberland, acquired Supreme for $2.1 billion.

Who is the next Supreme?