Since introducing Lands’ End Canvas in November, Lands’ End has quietly been testing a few other initiatives that were detailed at its fall preview. 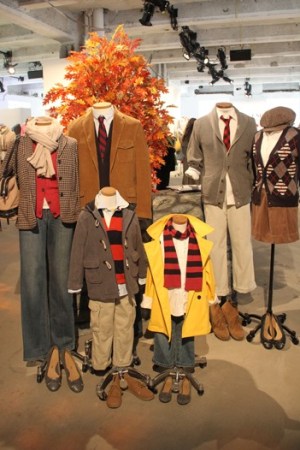 Since introducing Lands’ End Canvas, the company’s younger, more stylish collection in November, Lands’ End has quietly been testing a few other initiatives that were detailed at its fall preview, held Wednesday at Rockefeller Center in Manhattan. First, the Heritage Collection, a range of perennial Lands’ End classics such as the Squall jacket and the Drifter sweater, was introduced in the catalogue and online three months ago. “We’ve been doing classic American sportswear longer than Gap,” said president Nick Coe. “[Heritage] is the concept of pulling together those great iconic signatures.”

Updating and expanding on the company’s roots appear to be priorities for Coe, who oversaw an overhaul of the classic down outerwear, redesigned for fall with an eye toward more modern fits, a broad range of colors and three groups: everyday, luxury and chevron. Also new is a “smart” luggage launch, the Flightwise, a collection designed to comply with airlines’ carry-on standards. “You’ve got to get your head aligned with the customer’s,” said Coe, whose team constantly monitors e-mail, letters and Facebook for feedback. That led to a focus on dresses, a category for which Lands’ End hasn’t typically been known, and accessories, mainly bags and scarves, which the company is keen to grow.

Men’s wear was also heritage-oriented, with a wide assortment of woven shirts — everything from washed oxfords and brushed twills to flannel and chambrays — in proprietary fabrics. Cashmere, cable and merino knits, an array of colorful polos, and slub waffle knits in Henleys or crews updated the tops offering, while slim-fit jeans and a gray wash are new to Lands’ End denim. Ernesto Ramirez, men’s design director, also noted the counterpoint between casual corduroy pants that “look like you’ve had them for years” and the slightly dressier sport coats. “We’re about offering versatility in men’s wear,” he said, “not just clothes for one occasion.”