Launching a swimwear collection is no day at the beach, but these eight new brands — all designed by women — are making a splash with niche offerings that range from eco-chic to mix-and-match.

By Kristi Garced and Marcy Medina on June 5, 2015
View Slideshow 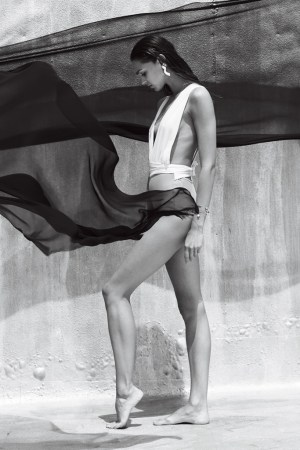 Launching a swimwear collection is no day at the beach, but these eight new brands — all designed by women — are making a splash with niche offerings that range from eco-chic to mix-and-match.

Paris-based designers Claire Mougenot and Virginie Courtin-Clarins, who met at the Edhec Business School, launched Luz in 2014 after discovering a gap in the market: There was no such thing as an eco-friendly swim brand in France at the time.

The collection, produced in South America from organic materials, focuses largely on the one-piece, a style both women felt was overlooked. But their version is considerably sexed up, featuring high cuts and deep décolletés, while conveying a sporty feel heavy on colorblocking. With suits priced from $200 to $300, Luz hits in the U.S. this summer at The Webster and Marie Eiffel and is also sold online at Cools.com and on Luz’s own e-commerce site.

Sophia Kim, 23, was so eager to launch a swimwear line that she graduated from University of California, San Diego a year early to use her college funds as seed money. She found a manufacturer in Bali, raised additional financing via Kickstarter, and launched at Miami Swim last July.

The flirty, feminine separates, which retail from $60 to $70 at I Shine 365, Diane’s Beachwear and Revolve, come in shiny nude, black, coral, sea green and Cinderella blue. “Women want suits to match their mood,” Kim said. “What kind of persona do you want to show the world that day?”

Annelies De Rouck became frustrated when buying coordinated bikini sets from other swim brands, which often sell tops and bottoms in the same size — a formula not suited to every woman’s body. “Fit is incredibly important to me,” said the New York-based designer, who launched Seilenna in 2014, allowing customers to choose different sized tops and bottoms in a variety of colors and shapes, from high-waisted to skimpier string styles.

Sleek one-pieces join the separates, some in hand-drawn whimsical prints, which can be mixed and matched. Seilenna styles range from $130 for separates to $370 for one-pieces, and have been picked up by Moda Operandi, Steven Alan and GOOP, in addition to retailing on the brand’s own e-commerce site.

Sexy, but still chic — it’s a fine line that Paula Fernández, who grew up summering on an island in Spain and started designing bikinis for fun at age 15, aimed to capture with Valimare. “We create pieces for women who want to look elegant but also sexy, and don’t want to wear some crazy cutouts,” said the London-based cofounder and designer, who launched the brand with her partner, Ankit Jain, last spring.

Produced in Italy, the line emphasizes vibrant colors in luxe fabrics with accents of gold hardware. Separates start around $100, while silk rompers and caftans average $250. Valimare is sold on the brand’s e-commerce site and in boutiques at select upscale hotels such the Four Seasons Maui and Viceroy Anguilla.

Beach Riot, a play on designer Nicole Hanriot’s last name, offers swimwear with an edge. A former designer for Tavik swimwear and Primp sportswear, the Costa Mesa, Calif.-based Hanriot debuted with unconventional looks such as high-neck tops and front and side cutouts. “I love being able to translate runway trends into a swimsuit,” said the designer.

Suits retail from $45 to $200, and just three years after its launch, Beach Riot is sold in 200 stores, including Free People, Molly Brown’s and Nordstrom. Hanriot’s latest addition: a coordinating apparel line for fall priced from $50 to $345.

Notable for its sexy, lace styles — rather uncommon in swimwear — Los Angeles-based Lezard exudes a subtle rock ’n’ roll edge. “Our one-pieces are worn year-round by many of our customers as a bodysuit with jeans or a skirt,” said designer Leah Shlaer, noting that almost every suit has adjustable straps and some are reversible.

Shlaer, no stranger to design, having founded a namesake swimwear line in 2011, launched Lezard in 2014 with model Alyssa Julya Smith, who once modeled her former collection. The line is sold at Satine, Madison, Scoop NYC, Nasty Gal and other specialty retailers, with separates starting around $100 and one-pieces topping out at $275.

Swimwear is in her blood, said veteran Los Angeles-based designer Adriana Caras. “I’m 100 percent Greek, so my history’s coming into it,” explained the founder of LeSwim, which launched for resort 2014. Her reversible suits and cover-ups, all made in Italy, offer a sophisticated take for luxury resort-goers. “It’s not the cheeky things you see everywhere,” she said.

Done in a palette of Grecian blue, white and blush, including a pool print by artist Zoe Crosher, the suits retail for $250 at 25 doors, including Reveal in Dallas, Waterlilies in San Francisco, Seaside Luxe at the Four Seasons Maui and Jill Roberts in Los Angeles. New this season: a line of leather and crocodile sandals priced from $258 to $495.

“Swimwear holds as much importance [to her] as an evening gown would,” said cofounder Alexis Sparling of the Swimtarte customer. “We want to go beyond ‘cute suit’ to ‘Wow, that ruffle placement was thought-out.’”

Sparling and her Swimtarte partner, Kaelea Ann Sim, both native Texans, joined creative forces in 2013 to launch the line out of Brooklyn, where they each live, following design stints at Yigal Azrouël and Champion activewear, respectively. Their line stands out for its flirty prints, ruffle and strap details and sexy yet sporty feel, with pops of blue and fuchsia throughout. The swimwear, all made in New York, ranges from $150 to $225 and is sold on the brand’s e-commerce site. — K.G.