As president and chief executive officer, McMahon succeeds Fritz Winans, who has left the company. 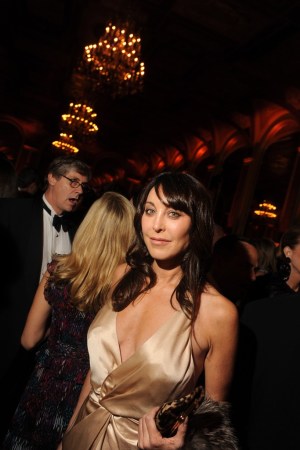 Tamara Mellon is getting her new house in order.

She has tapped Glenn McMahon as president and chief executive officer, succeeding Fritz Winans, who has left the company.

McMahon stepped down in July as president and ceo of St. John. During his six-year tenure, he strengthened St. John’s design department, made a significant marketing push, established a jewelry division, relaunched e-commerce and gave the freestanding retail units a facelift. Earlier, he was president of Dolce & Gabbana USA, president of Ellen Tracy, executive vice president of Giorgio Armani Collezioni USA and vice president of Donna Karan.

“Glenn has great experience managing global luxury businesses. That was the level of experience we were looking for,” said Mellon, founder, chairman and creative director. “He understands my vision and how to execute my vision, which is very important to me.”

McMahon, who will be based at Mellon’s New York offices at 660 Madison Avenue, begins today.

“Tamara represents the modern woman today,” said McMahon. “She’s a personality for sure, and she’s well known globally.…I’m [pleased] to work alongside of her, and I love her business model of ‘buy now, wear now.’” Tamara Mellon will launch next month with ready-to-wear, handbags and shoes in select specialty stores in the U.S. and Europe such as Harrods, Bergdorf Goodman, Neiman Marcus and Jimmy’s, as well as Net-a-porter. The company will deliver new merchandise every month, said McMahon.

“Today, the psychology of women is to buy something and wear it tomorrow. She doesn’t want to wait four or five months. No one has that mind-set anymore,” said Mellon. “My business has no season, it’s just by the month.” The rtw collection is targeted at the entry level of designer. “It’s chic, but it has an edge. She’s a relaxed woman and she’s sensual,” said Mellon. The lion’s share of the collection wholesales from $250 to $500, with more special pieces, such as furs, at higher price points.

The brand will launch an e-commerce site in February and plans freestanding stores in the U.S. and Europe. The first two stores will open by the end of next year in New York and London, said Mellon. Shoes and bags will be manufactured in Italy, in the same factories Mellon used at Jimmy Choo, which she founded and where she served as chief creative officer. Mellon’s rtw will be manufactured of Italian fabrics in Hong Kong, New York and Europe. Mellon is the lead investor in the company, which is privately financed. It employs 15 people, and the plan is to have 30 in total over the next year.

Mellon resigned from Jimmy Choo in 2011 several months after the brand was sold to luxury goods group Labelux. She left with the intention of starting her own brand.