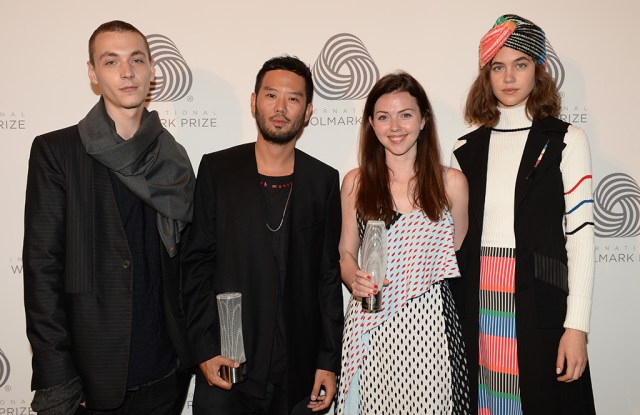 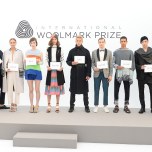 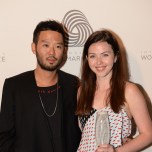 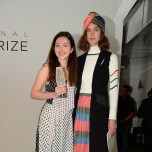 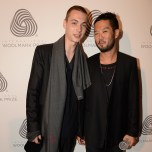 “I’m in seventh heaven,” Im said.  “I never expected to win. I’ve always felt like an outsider. I’m so blessed.” And then he flashed a peak at his watch. “I want to call my parents [in South Korea].”

Both Im and Taylor will receive 50,000 Australian dollars, or $37,000 at the current exchange, as well as the opportunity to compete in the international finals, which for men’s will be held in Florence in January and for women’s will be held in New York the following month. For the next six months, the winning designers will be required to develop a capsule collection in merino wool that will be showcased at the finals. They will compete against the winners from regional contests that take place in London, Shanghai, Sydney, Dubai and Antwerp, Belgium.  The two overall winners will each receive $100,000 Australian dollars, or about $74,000 each, as well as the opportunity to have their collection carried in Harvey Nichols in London; 10 Corso Como in Milan, Beijing and Shanghai; Saks Fifth Avenue in the U.S.; Joyce in China; Isetan Mitsukoshi in Japan; Boutique 1 in the United Arab Emirates; David Jones in Australia, and on Matchesfashion.com.

Taylor, who launched her namesake collection in 2012 and beat out women’s wear finalists Chris Gelinas, Kaelin, Nellie Partow and Novis, said she planned to celebrate with her staff. “That’s my whole team,” said Taylor, pointing a group of people milling in front of the stage. “I’ll have drinks with them and go out and celebrate. They’re the hardest working team ever.”

John Varvatos, one of the men’s wear judges, said it was a tough decision to make.

“We’re always looking for new innovation and the next talent. They did a great job. Everybody’s quality is fantastic. There were two designers who were neck and neck. A lot of them could have won. It’s a combination of how you present yourself and what your story is, if all your cylinders are pumping,” he said.

About Im’s win, Varvatos said, “I like that he’s pushing the walls out. He’s very respectful of his heritage and raw materials. He wants to walk to his own beat, which is innovating and not following others.”

Each of the finalists spent about 15 minutes during the day meeting with the judges and discussing their designs, businesses, price points and customer base.

Taylor’s winning design was a stretch wool printed skirt, a fully fashioned knit sweater and a hand-knit hat. There are lines coming together and a lot of stripes. “It was inspired by a bull’s-eye,” Taylor said.  “It’s all very intersected with movement.” The shoes were a collaboration between Taylor and Paul Andrew.

Prior to being named, Im said he was happy the interview process was behind him. “It was very nerve-racking and I’m kind of relieved,” he said. Im has been working on his collection for a few months “exploring cultures in New York’s outer boroughs.”

“That’s the real New York, and all the immigrants who come in. It’s multicultural and it’s a microcosm of the world. It inspires me more than just the downtown scene,” he said. Im’s collection of Italian merino wool was manufactured in New York.

Im trained as an architect before switching to fashion, working as a designer for Karl Lagerfeld and Helmut Lang before launching his namesake line in 2009, which is known for its Western tailoring, clean lines and structured designs. In 2010, he won the Ecco Domani Fashion Foundation award for Best New Menswear.

Francisco Costa, women’s creative director of Calvin Klein Collection, who was on the women’s wear jury, said, “It was hard to decide. They’re all so individual. They’re really talented, all of them.”

Colleen Sherin, vice president, senior fashion director at Saks Fifth Avenue, who was also a judge for the women’s wear collections, added, “It was a strong group of designers. It was a difficult decision. There was healthy debate. Each designer had his or her own take on wool and how to innovate with wool. It’s a great initiative.”

She said it also doesn’t hurt to have a solid business and to understand creativity. Saks will be carrying the collection of M.Patmos, the 2014/15 International Woolmark Prize winner, at Saks stores and online, beginning next month.

Each of the finalists mixed and mingled with the crowd at the event, while models displayed their designs on stage.

One of the men’s wear finalists, Hart, took a dressy direction with his design. “There’s something about dressing up in a suit and tie that’s almost rebellious,” said Hart, who homed in on black tie looks.

Gelinas, a women’s wear finalist who designs CG, said, “I’m a bit of a textile nerd. Innovation in wool is right up my alley. I love to push people’s perceptions of fabrics and fibers. It’s easy to think about wool in the context of suiting and knitwear. I wanted to push this more toward performance and technical. I wanted to bridge the gap between classic femininity and technical innovation.”