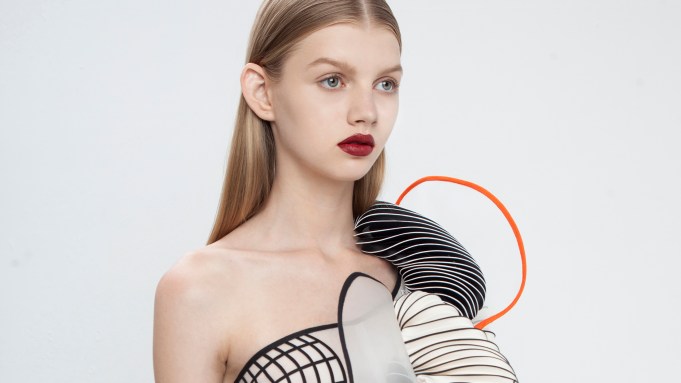 BOSTON — Fierce to look at but gentler on the planet.

That’s the future of clothing, as envisioned by the Museum of Fine Arts fashion exhibit, “#Techstyle,” through July 10.

The show opened with a party and sit-down dinner for 400 in honor of the 10th anniversary of the MFA’s Fashion Council. The group has helped the museum acquire 20th century fashion, and now, with five new pieces in the show, 21st century looks as well.

The MFA showcased the rise of the designer/scientist and to celebrate the many connections to MIT and Harvard.

“Fashion designers and scientists, mathematicians and engineers often collaborate to create very wearable designs,” noted Pamela Parmal, the MFA’s David and Roberta Logie curator of textile and fashion arts. “Many young designers like those at TheUnseen, Nervous System and Francis Bitonti are also scientists in their own right and have chosen to work in the fashion world.”

Among the best of those science-meets-fashion moments: Iris van Herpen’s collaboration with MIT professor Neri Oxman, who directs the school’s Mediated Matter design research group and produces her own biomorphic wearables. The duo’s Anthozoa cape and miniskirt is stunning, crusted with 3-D-printed black-and-white polyurethane and acrylic polyps. They appear to be not just growing out of the fabric, but competing for space, pushing at each other like a living colony would. In person, it is startling and — strangely — classic.

Viktoria Modesta, a Latvian-born pop star/DJ/futurist, who is a fellow at MIT’s Media Lab, attended wearing a Rem D. Koolhaas United Nude cutout dress and a leg prosthetic made of silicone, plastic shards and Swarovski crystals. Modesta, who chose to have her lower leg amputated after 15 surgeries failed to correct a birth injury, opts for prosthetics that don’t mimic flesh. The eight she owns are statements of transformation — a leg with the speaker as kneecap, one that glows, or a single black-gloss spike. The latter is on exhibit in “#Techstyle.”

The MFA also commissioned a dress, Kinematic Petals (2016), from Somerville, Mass., based Nervous System whose cofounders, Jessica Rosenkranz and Jesse Louis-Rosenberg, are graduates of Harvard’s Graduate School of Design and MIT. They’ve collaborated with New Balance, and their works have been  acquired by MoMA and Cooper-Hewitt.

“As a hub for technological development,” Parmal said, “Boston is the perfect place to showcase the current integration of contemporary fashion and technology.”

The design collaborative of Threeasfour — Gabriel Asfour, Angela Donhauser and Adi Gil, plus collaborator Travis Fitch — attended #Techstyle’s opening to celebrate their Harmonograph dress (2016). A projecting swirl based on the mathematical Fibonacci sequence, the “fabric” looks like lace or smoke. At more than 200 hours to model and 300 hours to print, it is tech’s version of couture. At dinner, the talk turned to the possibilities of 4-D printing, so called when select chemicals are “printed” out, they react and produce the fourth dimension, a new material.

In the gorgeous/unwearable category was Ying Gao’s Incertitudes shirt and shorts (2013), a translucent, vellum-looking tunic bristling with straight pins. It responds to audio waves, shrinking at noise like something shy, its furry pins glittering with light.

The museum acquired Chalayan’s Possessed dress (2015), a remote-controlled red dress that responds to a dancer’s movements — rising to give her hips unfettered movement.

But some things looked promising for popularity, albeit with a little refining, such as Pauline van Dongen’s front-zip, black dress with a Neoprene, solar-paneled collar. The panels were small and looked chic, like coppery embellishments. After two  hours in the sun, the outfit could charge a cell phone — though possibly also triggering heat exhaustion.

As electronics continue to permeate our lives, the exhibit showed garments woven with wireless circuits, such as an Akris tuxedo with pindot lighting. The MFA commissioned London-based Cute Circuit, who has done pieces for Katy Perry, U2 and others, to produce a gown of 10,000 micro LEDs that tweets and has a repertoire of crowd-pleasing, light-show designs, including corsetry curves and Hokusai’s “Great Wave.”

On the less glitzy side, the show looked at how technology can lighten fashion’s eco-impact. “Traditional ways of processing natural fibers, weaving cloth and dyeing are among the world’s most wasteful manufacturing processes,” Parmal said. The show includes Kate Goldsworthy’s Zero Waste dress (2016), which proposes a closed-loop world where a recyclable fabric is cut, seamed and finished without waste.

Parmal cited Issey Mikaye “123 5” collection (2010), an origami-inspired collaboration with mathematician Jun Mitani, as one of her favorites. The garments unfold into dresses from flat polygons — easy to pack and ship. They are made from a sustainable polyester fiber developed by Teijin Limited, which produces fabric without using fossil fuels. “The fibers are created by pulverizing, melting and spinning threads out of recycled polyester,” Parmal said.