Ten of Tomorrow: Creatures of the Wind’s Shane Gabier and Christopher Peters 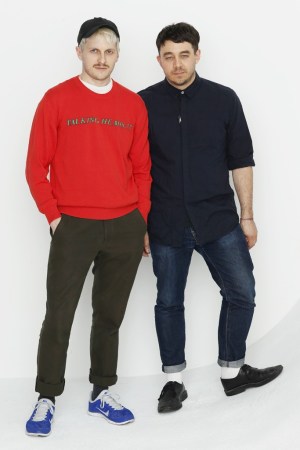 A lot sets Shane Gabier and Christopher Peters apart from their peers.

For one, there’s the unusual name of their label: not the typical pairing of their last names, but Creatures of the Wind, taken from a line in the old Johnny Mathis song “Wild Is the Wind.” The tune inspired Nina Simone, David Bowie and George Michael to do remakes, and, in 2008, it gave the two designers a phrase on which to pin their fashion aspirations. Then, there is their home base: Chicago, the Windy City.

It’s exactly those differences, though, that — coupled with the duo’s talent and charmingly quirky and slightly nerdy demeanor — is now touching a fashion nerve. Creatures, as it’s casually bandied about in fashion circles, has become one of the hottest tickets of New York fashion week.

The designers, who increasingly spend time in New York and plan to open a studio in the city soon, seem almost nonchalant about their rapid recognition in the industry. Their low-key manner suggests they didn’t anticipate any of it at all.

Partners in life and work, the two met while at the School of the Art Institute of Chicago. Gabier, a Michigan native, had graduated a decade earlier and worked in Antwerp, Belgium, for several years before returning to his alma mater to teach, which he continues to do. Peters, from New Jersey, was a student at the school (though not one of Gabier’s).

“It was really project-based in the beginning,” Gabier, 40, said. “We started working together. I don’t think there was a moment we thought we were making a collection, but it grew.”

“We made like 10 things and weren’t selling anywhere,” Peters, 29, recalled.

After personally writing Julie Gilhart, then fashion director at Barneys New York, the specialty store became the first retailer to pick up the line, and by spring 2011, they said, there was enough of a “proper collection” to start considering a New York Fashion Week debut. Since then, the designers have evolved their eccentric, hippie, folkish vibe with a more commercial touch.

“Making it challenging without making it totally inaccessible or difficult” is how Gabier puts it. “We feel we’re constantly evaluating the balance between commercial and conceptual.”

For fall, the collection is sold in a small but influential number of stores — about 15 worldwide, including Saks Fifth Avenue, Fivestory in New York, Ikram in Chicago, Dover Street Market in London and Beams in Tokyo, as well as on Net-a-porter.com.

“If you had asked us who our customer was two years ago, we had a much broader idea,” Gabier said. “We still like the idea of this young punky girl — if she can afford it — or the more mature, conservative woman who has style. I still want to maintain a broader audience, but we’re trying to hone it in a little bit.”

Peters called this a result of “being a little more mature about our work, and a little more realistic about how the work can function and grow.

“It’s funny,” he said, “when we talk about these things, we often have heated discussions about just the smallest detail, like bringing in an inch so it can be sexier.”

It’s their individualistic approach that evokes an emotion and makes the clothes special — a concept that goes right back to the collection’s name.

“The song is so emotionally evocative, but the different people who have sung in the past have put a different intensity and impact into the song,” Peters said. “We wanted the collection to be about this intense, emotional response that’s never the same.”