Ten Things to Love About the New York Season 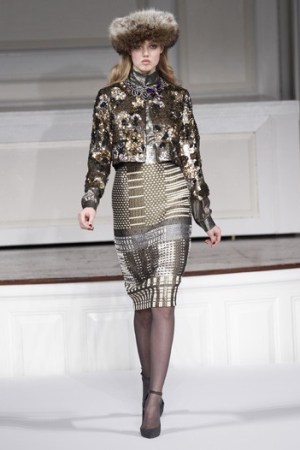 On to Milan! The length and intensity of the full season leave little time to digest the New York collections, even for those who didn’t rush off to London (myself among them). So much happens in New York, but then the ship moves — London, Milan, Paris, boom, boom, boom — so that at the other end, with a few exceptions, New York can seem like a big, distant blur. That would be a shame, as with nine days of shows, 12 hours a day, plenty of fabulous things emerged.

1. CELEBRITY REHAB
If designers didn’t exactly swear off the celebrity addiction that has so often exploded out of control, they did at least cut way, way back. It made for a nice break from the typical mayhem during which industry front-row guests spend a good chunk of preshow time trying to avoid face-to-rear-end contact with the paparazzi brigade. Those celebs who did put in appearances last week acted not like gotta-make-an-entrance divas but polite guests who arrived promptly and took to their seats sans fanfare. This was an especially happy development in the case of the aqua-sneakered Amar’e Stoudemire, who made for an exciting new presence at Tommy Hilfiger, capturing the fashion-crowd fascination far more acutely than did the usual-suspect types.

2. PARTNERS IN OPULENCE
Oscar de la Renta and Marc Jacobs seldom get discussed in one breath. Yet both are devoted nonminimalists at heart, and for fall both expressed that tendency via unbridled adornment, beginning with lavish, highly developed fabrics. De la Renta worked a Silk Road inspiration for a gorgeous collection in which nearly everything was intensely printed, embroidered, brocaded or otherwise embellished. De la Renta even made the humble madras and patchwork motifs exotic and rich. Inspired primarily by his own archives, Jacobs went all-out dotty in a collection of arch, couturelike shapes, almost all covered with some rendition of spots. The clothes looked very expensive — when do they not? — but not in a grand manner. Rather, the highly demonstrative fabrics took a turn toward the technological. One example: the large film discs fused onto molded plastic and worked into curvy skirts.

3. WEATHER CHASERS
Who says designers work holed up in ivory towers? This season, they worked holed up in their New York studios, which meant braving the relentless cold and snow just like everyone else. The result was outerwear heaven, populated by terrific, distinctive pieces. Tommy Hilfiger, for example, showed printed shearlings, and for Richard Chai — Love, Chai offered takes on men’s looks, as did Peter Som, his with a bit of au sauvage. Anchoring the parka brigade: Vera Wang, Thakoon Panichgul and Joseph Altuzarra. Asked whether the winter influenced his lineup, Altuzarra noted that it “was huge.” Still, as he wanted to keep everything sexy, he put the ample parkas over filmy dresses. Mission accomplished.

4. CARLYLE KORS
To mark 30 years in business, Michael Kors chose to celebrate with a relatively intimate fete at that great bastion of decadent decorum, Bemelmans Bar. It could not have made for a lovelier evening, even if those who arrived from Proenza Schouler’s fabulous show only got to hear about Judy Collins singing “Over the Rainbow,” rather than her actual performance itself. When a contingent from WWD arrived, Kors referenced the long-ago photo of him with two models that had graced his invitations and the cover wrap of that day’s paper. In the shot, Kors looks utterly boyish with a mass of golden curls. Angelic, yes, but a friend of his noted another similarity: “He told me I could have replaced Christopher Atkins in ‘Blue Lagoon.’”

5. NORMA, SHEARER
Ever the iconoclast, Norma Kamali decided to show in a whole new way for fall: in her store, on eight-foot foam board cutouts of models Lais Ribeiro and Darla Baker. Kamali called it her “big-girl installation.” Yet while Kamali is always interested in forward motion, including an aggressive use of social media, sometimes a leap forward involves a step back. Thus, she personally made all of her patterns this season. “I may not do it again,” Kamali said. “But with all of the other stuff that goes on in fashion today, it’s important to stay aware of the craft of the business.”

6. DELIGHTFULLY WRONG
Sometimes it’s wonderful to be proven wrong. Victoria Beckham and The Row’s Mary-Kate and Ashley Olsen continue to stick it to their early skeptics, sartorially speaking, with terrific collections. This season, they scored big again, Beckham by infusing a newfound ease to her dresses and the addition of impressive coats; the Olsens, with a darkish, slyly decadent mood that allowed them to expand their concept of wardrobe pieces. Most impressive is that the three women have chosen to grow their businesses — and their professional profiles — slowly, keeping the focus firmly on the merch rather than on themselves.

7. THE AMERICAN WAY
The line “a great year for American sportswear” can be code for borrrrr-ing. Not so this time around, as designers found ways to push the basics to distinctive effect. They found inspiration in everything from the classics, which they destabilized smartly (Jason Wu, Adam Lippes), to grunge (Chai, Altuzarra) to extreme sportswear (Alexander Wang) to a chic lady’s more casual side (Lyn Devon). Yet not all Americana references were about sportswear. Exhibit A: Rodarte’s Kate and Laura Mulleavy drew from “Days of Heaven” for a richly realized ode to the heartland that was as romantic as it was chic.

8. VAGABOND RALPH
While so many designers looked to homegrown motifs for inspirations, the man whose personal lexicon abounds with such references, and who showed a fabulous ode to the Southwest for spring (the 72nd Street windows look divine), surprised with a trip East. Ralph Lauren traveled to Shanghai for an elegant collection filled with real clothes wrapped in an air of mystery.

9. MANIFEST DESTINY
Many of New York’s younger designers continue to make their mark, not only with strong collections, but by carefully charting their growth. The latest to take the vertical retail plunge: Alexander Wang, who last week opened his 4,500-square-foot shop at 103 Grand Street, once home to the store of no less a deity than Yohji Yamamoto. “This is a place where we can do really special pieces that stores might not want to take the risk on,” Wang said. “We can test-drive here.”

10. LET’S VENT
For some reason, show going incites the concentrated whine. Complaining is part of the communal experience and who doesn’t need and enjoy a good vent now and then? Among the favorite topics: the constant uptown-downtown treks, a genuine stress-inducer as people fear missing a show. Other matters, however, are just annoying. Top of my list: Those who, when exiting a show, become oblivious to all stimuli save for the apparently emergency texts and e-mails that have accrued during the last 14 or so minutes, which is about the average length of a show. How about getting out of the way first and then checking the phone? And speaking of out of the way, how about the women who think it’s fine to block a sink in the portable facilities at Lincoln Center to touch up their makeup? I cannot imagine breaking out the mascara wand in an unpleasantly fragranced Porta-Potty, but that may be my quirk. More importantly, I can’t go take my seat (show seat, not toilet seat) until I wash my hands, and you’re blocking the way. Move!