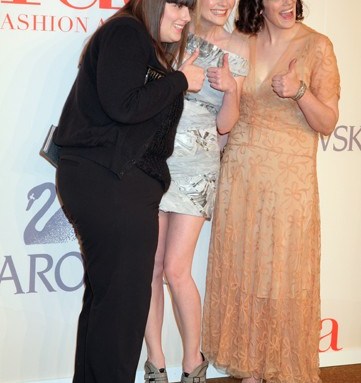 NEW YORK — The stakes were high, but some designers were calm and collected Monday night at the 2009 CFDA Fashion Awards, held for the first time at the refurbished Alice Tully Hall. “I went to work, had a couple of meetings, ate Thai food,” Swarovski Award for Womenswear winner Alexander Wang said casually about his day-of routine. “I just want to hang out with my friends.” Among them was his date, Dree Hemingway, who mingled with other starlets such as Kirsten Dunst, Blake Lively, Diane Kruger and Claire Danes.

Exclusive WWD Video: The Red Carpet Scene at the 2009 CFDAs

There were even some fashion neophytes in the crowd. “That’s Ralph Lauren, right?” asked Bradley Cooper, arriving with Calvin Klein’s Italo Zucchelli, who tied with Scott Sternberg for Band of Outsiders for the Menswear Designer of the Year award. “And I think I saw Anna Wintour,” he added.

Among the evening’s other winners were Kate and Laura Mulleavy for Rodarte, who picked up the Womenswear Designer of the Year nod; Jack McCollough and Lazaro Hernandez for Proenza Schouler, who took home the Accessory Designer of the Year award; Swarovski Award for Menswear recipient Tim Hamilton, and Swarovski Award for Accessory Design winner Justin Giunta for Subversive Jewelry.

The Board of Directors’ Special Tribute was awarded to First Lady Michelle Obama. Ralph Lauren won the first Popular Vote award. Not all of the recipients were quite so relaxed. Anna Sui knew she would be expected to give a speech in accepting her Geoffrey Beene Lifetime Achievement Award. “That’s what I’m nervous about,” she said. “I feel like the kid who didn’t do her homework. I’m going to rely on those presidential teleprompters.”