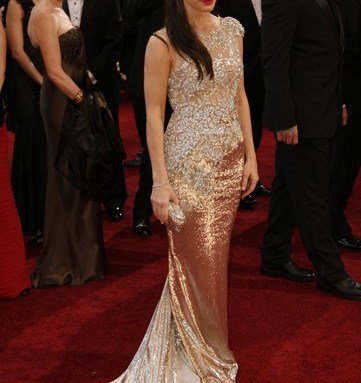 Go big or go home. That seemed to be the message at the 82nd Academy Awards Sunday, as actresses’ dresses overflowed, trailed and pouffed onto the red carpet at the Kodak Theatre.

“There are dresses everywhere; it’s a minefield out there,” said Best Actor in a Leading Role nominee George Clooney as he attempted to navigate the red carpet with girlfriend Elisabetta Canalis on his arm, her red Roberto Cavalli train all but enveloping his feet. Everywhere one looked, there was an abundance of skirts, ruffles and bows that would have made Scarlett O’Hara proud. This being 2010, it seemed a bit much. But Sarah Jessica Parker, who donned a Chanel Haute Couture gown “that Mr. Lagerfeld so nicely made for me when I asked him,” was so in love with her dress “that I don’t want to give it back. I also don’t want to sit down, because the back is so beautiful. I’m hoping they bring back the leaning board tonight.”

At least Giorgio Armani’s Privé princess gowns — on Amanda Seyfried and Jennifer Lopez — were made of Space Age fibers that were as light as they were voluminous, though they also made sitting a challenge. “This is not the direction I normally take, but it’s perfect for today,” said Seyfried, her arms filled with her skirt as she attempted to squeeze by Mariah Carey. “Now, let’s see if I can fit in the seat.”

While Armani’s gowns underscored one of the evening’s trends — pale colors — Best Actress in a Supporting Role nominee Vera Farmiga’s Marchesa look hit another: bold bright hues. “I feel like a peony in bloom,” she said of her pleated and ruffled fuchsia gown. “But I’m sick of winter already. I just wanted something that screamed spring.” Clearly some of her fellow nominees agreed, from Maggie Gyllenhaal, who chose a painterly printed Dries Van Noten column, to Gabourey Sidibe, who went with a blue, diaphanous Marchesa number, of which she said, “Listen, if fashion was porn, this dress would be the money shot.”

Some, though, seemed a bit overwhelmed by their looks. Miley Cyrus in Jenny Packham looked less sexy than Helen Mirren in Badgley Mischka. Of course the best bet for some is to leave the decision making up to others.

Sandra Bullock, in a sleek, shimmery look, clearly hadn’t gotten the same fashion memos as her fellow actresses and she wasn’t concerned. “There are so many gorgeous dresses out there I couldn’t possibly predict the trends,” she said. “My stepdaughter picked out my dress yesterday.”