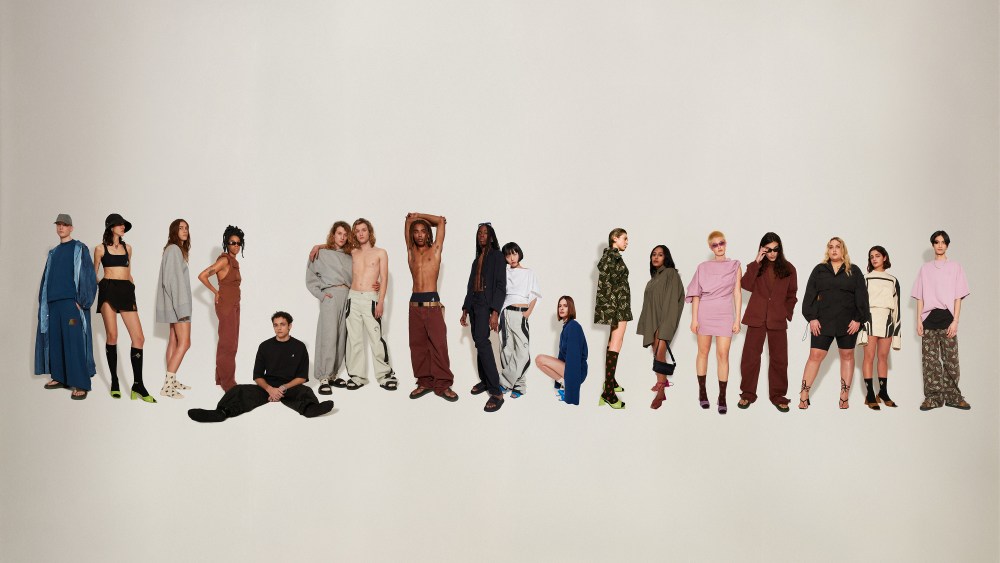 MILAN — The Attico is approaching the world of streetwear.

The Milan-based brand, founded and designed by digital entrepreneurs Gilda Ambrosio and Giorgia Tordini, on Tuesday will unveil “Life at Large,” a genderless capsule collection focused on cool street attires.

The capsule hits stores this week and is part of the brand’s new strategy, which, as The Attico chief executive officer Stefano Marcovaldi, revealed last summer, now includes the unveiling of two main collections a year and of a range of capsules that can be focused on different product categories.

“For the first capsule, we started with ready-to-wear,” Tordini explained. “We wanted to step out of our comfort zone to create something very different, but that includes details and codes that are very signature of the brand.”

Although the designers employed mainly cotton, nylon, jersey and Neoprene — instead of the usual silks feathers and sequins — they actually couldn’t forgo some feminine touches, for example transforming a classic T-shirt into a draped, asymmetric top to match with coordinated baggy fleece pants. While oversize hoodies, joggers and maxishirts with applied pockets took center stage, Tordini and Ambrosio also created a T-shirt dress with padded shoulders and a drawstring putting the focus on the waist, as well as a draped miniskirt, all crafted from Neoprene.

Along with solid tones of gray, chocolate brown, black and military green, the brand introduced three patterns. One features the letters composing the name The Attico reshuffled for an abstract motif, another shows an allover print of the brand’s logo creating a camouflage-inspired pattern and the third echoes the color effects of thermo-sensitive fabrics.

“We designed this collection with Milan’s cool kids in mind. I think it offers products that people feel like wearing now, thanks to the sense of comfort and relaxation that we tried to infuse into them,” Ambrosio said.

In order to showcase the versatility and inclusivity of the capsule, The Attico created a customized campaign, which involved 18 talents. The brand actually posted on its social media accounts a casting call. “We received 3,500 emails,” said Tordini, explaining that out of them, they selected 40 boys and girls whom they personally met at The Attico headquarters in Milan. “We talked to them, we asked them about their lives and their passions, it has been really fun, but also moving,” Ambrosio said.

The designer selected a group of 18, who are the protagonists of the images that The Attico will use to promote the collection, but also of mini videos where they will share their own feelings and points of view.

In addition, following the official release of the collection, The Attico will start an event on booming social media platform Clubhouse, opening a room where Ambrosio and Tordini will moderate on Feb. 23 at 5:30 p.m. a conversation among the talents appearing in the campaign.

The “Life at Large” capsule will be available at The Attico’s online stores, as well as at about 200 international retailers.

“Our established partners were enthusiastic of this new street capsule, which also opened up the doors of other retailers which we started collaborating with,” said Ambrosio, highlighting that this range is complementary to the brand’s signature cocktail and evening offering. “Usually we dress women from six o’clock to sunrise,” she said. “With this capsule, we are giving our consumers new items to sport during the day, completing our lifestyle vision.”

The Attico will release another capsule in March, while the brand’s fall 2021 collection will hit stores between June and September.