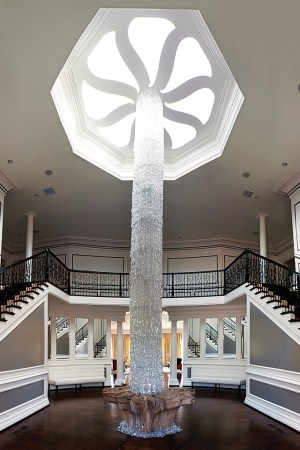 It probably wouldn’t be much of a stretch to proclaim the sun never sets on La Maison de Soleil, the house in the Los Angeles enclave Holmby Hills that the Azrias purchased in 2005.

The residence is spread out over about 26,000 square feet, 60 rooms and three gardens. It was built in the Thirties for the “Amos ’n’ Andy” radio personality Charles Correll, and the Azrias bought it for a reported $16 million from Sidney Sheldon, the Oscar-winning novelist, screenwriter and producer.

The Japanese garden sold Lubov Azria on the house.

“When we originally walked through the house, it was overwhelming. It was too big. Yes, we have six kids all together, but, in reality, they’re going to grow older and leave,” she said. “Then, we went to visit, and we went into the Japanese garden. You can’t build that any more. It was breathtaking. The size of the trees was just incredible. It was like you were in the forest somewhere. So, we decided, definitely, we were going to take it.”

Once that decision was made, Max and Lubov Azria got started overhauling the Hollywood regency-style manse to make it their own.

“The original house, which has curved windows, was designed by Paul Williams, and we wanted to keep that element. We raised the ceilings much higher because the original house had very low ceilings,” said Lubov. “We created larger rooms. I wanted it to be like a hotel. It should feel very warm and welcoming.”

The color palette was important in setting the tone. “What colors do we love? What colors can we live with all the time?” she recounted, adding she and her husband asked themselves these questions when planning the renovations. “One of them was orange, another was white, the third one was gray — and then we love the dark wood.”

The house’s name comes from the Soleil, or sunburst mirrors, that Lubov has collected for a decade or so. She explained, “When I was young, I fell in love with this picture of a couple pregnant with their first child and, behind them, there’s a Soleil mirror. In the mirror, the artist painted himself, and I thought that was quite cool.”

In the house, roughly 20 such mirrors are hung, a number whittled down from a collection that had risen to in excess of 50 mirrors.

Other hallmarks of the house are chandeliers — there’s one that cascades into a petrified wood table and another that’s a cherry blossom Swarovski variety hanging over a table made from antique French doors framed in glass — a movie theater, a chrome garland ceiling decoration made from hundreds of laser-cut flowers, animal sculptures and chairs upon chairs of different sizes and shapes. “I’m obsessed with chairs,” remarked Lubov, adding about the furniture, “I just went a bit crazy. I bought the things that I loved and just made them work in the house.”

Of course, there is plenty of room in the house for the Azrias’ famed Shabbat dinners, which can include 100 or more people.

“Shabbat is amazing. It’s your Thanksgiving every Friday,” said Lubov. “You are with people that you love, and you’re celebrating each other. You’re celebrating the connection that you have. You thank God for everything that you have and you do it with your whole family, and with the people that you want to be with. It creates an incredible connection, and I cannot imagine not doing it.”

Lubov especially prizes Shabbat because, overall, she doesn’t spend as much time in the house as she would like.

“The thing in life is that you don’t get what you want, you get what you need,” she said. “So, if you have this incredible house, then you’d want to have time, but that’s the most precious thing. I work like 14 hours a day, so I don’t get to enjoy it.”