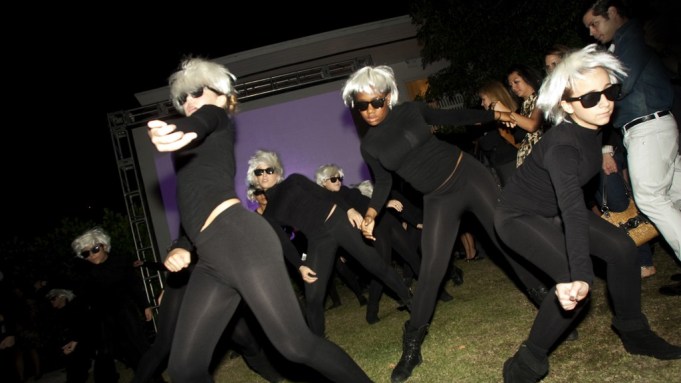 •  The Alchemist boutique, which sits on the fifth floor of the much-ballyhooed parking garage at 1111 Lincoln Road designed by Herzog and de Meuron, got in on the Art Basel Miami Beach action on Thursday with a party for an art installation showcasing works by Marina Abramovic, Erin Wasson, Todd Selby and Chrome Hearts’ Richard and Laurie Stark. Joining the group in a roped-off section of the parking garage with panoramic views of Miami were Roland Mouret, Joseph Altuzarra, Jordan Betten and Robert Wennett, owner and developer of the glitzy parking structure.

•  “Me and my partner, Mario Cader-Frech, have lived here since July,” said Wennett at a pre-party inside his penthouse apartment atop the garage, which includes 18,000 square feet of outdoor space, gardens and a rooftop pool. “It’s the only private residence designed by Herzog and de Meuron, including all the furniture.…We have the most incredible view of Miami from here, so we decided we should have our residence up here.”

•  Altuzarra later joined Eddie Borgo, Jefferson Hack, Christopher Bollen, Nate Lowman and Todd DiCiurcio among the youthful throngs at a party hosted by Interview magazine, Belvedere and The Andy Warhol Museum at The Standard. Guests at the outdoor affair got a look at a 90-minute Warhol film titled “San Diego Surf” that the artist shot in 1968 shortly before surviving an assassination attempt. Midway through the waterside bash, a choreographed flash mob of 30 “Dancing Andys” in white wigs and sunglasses entertained the crowd.

RELATED STORY: Ever Manifesto Brings Some Green to Basel >>

•  Weiland proved to be a man about town as he DJ-ed a dinner party hosted by Tiffany & Co. and Architectural Digest at the Raleigh Hotel, which drew Gabrielle Union, Charles Townsend and Camila Alves, who was decked out in half a million dollars worth of Tiffany diamonds. Guests were treated to a performance by Colbie Caillat at the end of the night.

•  Fashionable films curated by A Shaded View of Fashion’s Diane Pernet was the focal point of the dinner and rooftop party hosted by ACRIA and Equipment for the blogger at the Delano Hotel. Pernet’s annual film festival in Paris has showcased short films by photographers like Bruce Weber and Ellen von Unwerth that feature fashion figures including Kate Moss and Vivienne Westwood. On hand at the dinner and rooftop party were Gareth Pugh, Julie Gilhart, Roxanne Lowit and Victor Alfaro.

•  Bold facers at the Nowness.com-hosted fete for Abramovic at Soho Beach House including Dasha Zhukova, Daphne Guinness and Hack took in a preview of the upcoming documentary “Marina Abramovic the Artist Is Present” on the second floor and a projection on an adjacent building side.

•  Over at The Westway pop-up location at the Shore Club, a scene very unusual for the haute Basel scene unfolded as knit-capped Williamsburg types rushed the exit and the entrance in about equal numbers — likely because there was no bathroom inside. It was unclear if anyone among the early-exit crowd would return, but dressed as they were, they probably had nowhere else to go.

•  Even amid all of Basel’s pomp, Maison Martin Margiela stuck to its understated guns. Down the street from its Design District boutique, and across from a naked performance artist literally living in a pigpen for several days, the house quietly exhibited “Love, etc.,” eight objects from its Line 13 home and publications collection that were displayed among symmetrical “mirror” panels depicting vignettes from Margiela’s newly completed La Maison Champs-Elysées.

•  Many fair attendees who couldn’t swing a pricy artwork could at least go home with Margiela’s limited edition nightlight for Basel. Made of Russian gypsum that naturally glows in the dark, its bulb shape looks like the everyday kind found in bathrooms across America.