New project organized by Vogue China and the online designer site aims to educate Chinese consumers about the value of embracing designer fashion made in China. 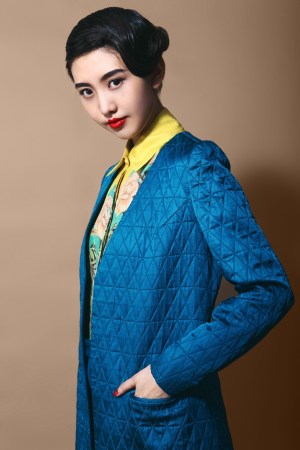 BEIJING — Five Chinese designers are about to get their day in the online sun.

A new project organized by Vogue China and Thecorner.com, the online designer site, will feature five emerging Chinese designers as a way to support emerging talent and to educate Chinese consumers about the value of embracing designer fashion made in China.

“These last couple of years, we’ve really started to feel a dramatic change, a new generation,” said China Vogue editor in chief Angelica Cheung. “They’re more mature professionals; they have their own design, their own point of view.”

The five designers — Christine Lau, Riko Manchit Au, Shangguan Zhe, Uma Wang and Zou You — will be part of the Vogue Talents Corner, a scouting initiative that seeks to find and promote the best designers. The quintet was picked from an emerging field of young designers who showed both promise and a sense of creativity that set them apart from the larger field, said Cheung. Eventually the project will include up to 10 Chinese designers on the site, along with five international ones: Giorgio Armani, Dolce & Gabbana, Etro, Y-3 and Z Zegna.

“We feel it’s like the beginning of a new story,” said Federico Marchetti, founder and chief executive of the Yoox Group, which sponsors Thecorner.com. “We thought we wanted to give Chinese customers more sophistication than usual.”

The site also offers a new service, something that is not available in any other place in the world: Chinese shoppers who might hesitate to go online and order high-end clothes from a little-known Chinese designer have the option of choosing the “butler service.” A delivery person will wait while the customer tries on the clothing she ordered. If she doesn’t like it or it doesn’t fit, the item goes right back. In addition, because all of the products on the Chinese site of Thecorner.com are made in China, customers also get next-day service in 400 cities throughout the country, said Marchetti.

The use of the Internet to promote these fashions is the perfect way “to create an education for consumers of Chinese design,” Marchetti said.

The launch of the site will be celebrated tonight at Beijing’s CAFA Art Museum, where the designers’ fall-winter collections and pieces made exclusively for Vogue China will be shown on a runway, with a fashion-oriented remix by music designer Matteo Ceccarini.

Each of the Chinese designers was chosen because they bring something unique, said Cheung. Lau, for instance, who began designing in 2008, uses nature as an inspiration for the prints she designs on her fabrics. Lau was featured in Vogue China’s July 2011 issue as one of 20 new talents to watch.

Manchit Au founded her design studio with both a ready-to-wear brand, Ricostru, and her own label, Manchit Au, with a focus on sophisticated style that emphasizes detail, tailoring and quality.

Zhe, who founded his label, Sankuanz, in 2006, features fabric textures and comfort, with combinations of wool, cotton, linen and chiffon.

Wang first showed her eponymous collection at Pure London in 2005. She specializes in mixing knits creatively with other materials.

You launched his women’s wear line, This Is You’z Clothing, in 2006 and believes that his style allows the wearers to showcase their own style.

“We’re building a business gradually, and hopefully we’ll contribute to a new era of Chinese fashion,” Marchetti said. “You can think, this was made by an Italian like Marco Polo. For us, China is a very long-term brand.” By 2015, he said, the company expects the site to be one of the top three markets for the Thecorner.com, along with Italy and the U.S.