The Costume Angel of the Oscars

Angels the Costumiers, a 172-year-old business, has provided clothing and accessories for all films nominated for best costume design at this year’s Oscars. 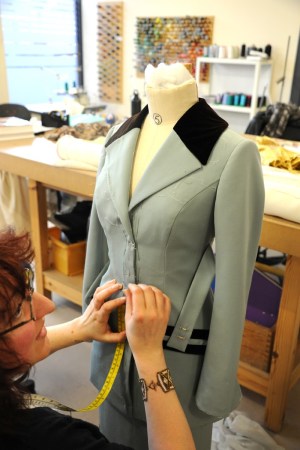 LONDON — Among the creations that got the nod for best costume design at this year’s Academy Awards are the chic Thirties costumes worn in Madonna’s “W.E.”; the Victorian garb featured in Cary Fukunaga’s “Jane Eyre,” and the Parisian fashions in Martin Scorsese’s “Hugo.”

Aside from sharing the Oscar buzz, the costumes also have a similar provenance — Angels the Costumiers, a 172-year-old business that operates from a vast warehouse in Hendon, an area of north London that’s a world away from the glitz of Hollywood.

The world’s largest costume supplier, Angels has provided a selection of clothing and accessories for all four films nominated for best costume design at this year’s Oscars — “W.E.,” “Hugo,” “Jane Eyre” and “Anonymous.” It supplied Sacha Baron Cohen’s electric blue French policeman’s outfit for “Hugo,” and some of the extras’ outfits for “W.E.”

“For everyone who works here, it is a kick that there are four movies up there,” said Tim Angel, the chairman of the company, from his spacious office surrounded by family photographs.

The firm, which Angel’s great-great grandfather Morris Angel founded in 1840, works with each film’s costume designer to source pieces from its huge archives, or create them from scratch.

To date, Angels has supplied costumes for 33 films that have won Academy Awards for costume design, including “Elizabeth: The Golden Age,” “The Duchess,” and “Alice in Wonderland.”

On a recent winter morning the Angels archive — which houses six million costumes — was abuzz with activity. An actor was being fitted in the wigs department, while a rail of costumes for the third series of “Downton Abbey” hangs nearby.

Arranged by period and then by color, a visitor can walk from the trenches of World War One uniforms, past samurai warriors’ costumes, into the delicate glamour of designs from the Twenties. There are also thousands of accessories, from exquisite millinery to period umbrellas.

In addition to creating costumes for film, Angels also opens its archives to designers looking for inspiration, and Angel said that Christopher Bailey, Phoebe Philo, Stella McCartney and the late Alexander McQueen have all come to examine the firm’s treasure trove of designs.

Designers can touch and feel the clothes — it is not just a picture, it is for real,” said Angel.

He has become adept at spotting his company’s influence on the world’s runways. Pointing to a beaded flapper dress that was featured in the fashion pages of a British newspaper that day, Angel noted his company has a nearly identical dress in its archives. “We have got that dress, in that pattern and that style,” he said with a smile.

He’s also witnessed how the costumes in a period drama can capture designers’ imaginations.

“What is on television and on film affects the fashion industry. Ralph Lauren is using a ‘Downton Abbey’ theme,” he noted, referring to Lauren’s recent fall 2012 show, during which models sporting tweeds, bowler hats and sequined gowns and walked down the runway to the “Downton Abbey” theme song.

After more than 40 years at the firm, Angel hasn’t lost his enthusiasm for costume. “I was always interested in history at school, and when I started doing costume, I realized that I could make history come to life — that is what it is about,” he said.