Sinister: The Dark Side of Hickey Freeman

New York Pops conductor Steven Reineke is set to debut a look from the new collection on March 16. 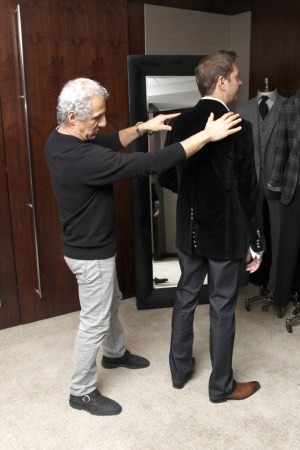 Steven Reineke has turned his back on some of the most powerful people in New York. And on March 16, the music director and conductor of the New York Pops will do it while wearing a prototype from Hickey Freeman’s new Sinister collection.

This week, Reineke, who is dressed by Hickey Freeman for his concerts at Carnegie Hall as well as other events around the country, visited the manufacturer’s showroom for the final fitting on a velvet tuxedo blazer with military influences that include a row of buttons up the back and flared gauntlet cuffs. The Sinister collection will launch for fall.

“Sinister is like the dark side of Hickey,” said Joseph Abboud, chief creative officer for the brand and president of its parent, HMX Group, pointing to the other offerings within the capsule collection including a slim black-and-white Prince of Wales double-breasted suit, a black cashmere turtleneck, a gray flannel tuxedo, dark shearling and suede outerwear and peak lapel topcoats.

Reineke said when he saw the tuxedo blazer, with its inset silk lapel and button details, he asked for it to be made in time for him to wear at the Pops’ “Patti Austin Sings Ella Fitzgerald” concert this month.

“When I looked at the jacket, I knew it was right up my alley,” Reineke said. Because he conducts with his back to the audience, the buttons on the rear of the coat were especially intriguing to him. “I spend half my life with people looking at my back.” He said wearing the jacket makes him “feel like a rock star. The first thing I thought when I saw it was Ringo Starr.”

Abboud said he’s looking at Reineke, who will be the first person to wear the blazer, as the “Sinister poster boy.”

For more traditional concerts, Reineke said he has more conservative apparel options. “For Rogers & Hammerstein, I would wear a classic tuxedo with a bow tie,” he said. “But this jacket will help freshen up the image of the New York Pops, which is the same thing we’re doing with the orchestra.”

Abboud said the Sinister collection, with its dark and mysterious influences, was “inspired by the Victorian era and Sherlock Holmes.” And while he wasn’t sure how it would be received by retailers, the response has been strong.

“What I hate about our industry is that we never take chances,” Abboud said. “Everything is so formulaic; there’s no originality.”

Mike Cohen, president of Hickey Freeman, said: “This is the beginning of [Hickey] going from classifications to capsules.” Last fall, Hickey offered a raw cashmere offering that was soft and luxurious. “Sinister is urban and grittier, the polar opposite of cashmere. We’ve always had black and white and gray in the collection, but this capsule is really important because when people drop into the stores, they get excited and it gives the salesperson something to talk about.”