The designer, Louis Vuitton’s artistic director since 1997, still appears to be the favored option to succeed John Galliano as couturier. 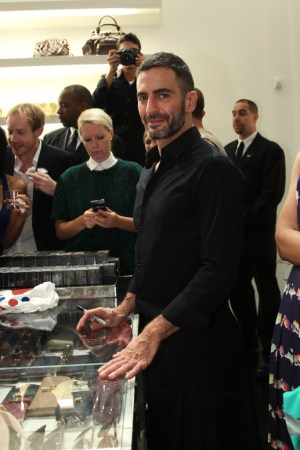 Natacha Ramsay-Levi Steps Down at Chloé

This story first appeared in the September 12, 2011 issue of WWD. Subscribe Today.

That’s the description of the ongoing negotiations between Marc Jacobs and Christian Dior which would move the star American designer from Louis Vuitton, part of French luxury giant LVMH Moët Hennessy Louis Vuitton, a sister company of Dior’s. Sources said the talks are proving difficult, with one sticking point believed to be that Jacobs and his long-time business partner Robert Duffy are seeking a substantial increase on their current salary and benefits packages, which already place them among the highest-paid designers and fashion executives in the world.

Dior, of course, is a much more demanding job than Louis Vuitton, with two couture collections in addition to two ready-to-wear shows and pre-collections. Also, the immense craftsmanship involved in couture means Jacobs would have to spend even more time in Paris working with the atelier on the collection. All of this would come on top of his own women’s and men’s wear lines, as well as Marc by Marc Jacobs, both of which have seen significant growth over the last few years.

But for now, sources said, Jacobs, Vuitton’s artistic director since 1997, still appears to be the favored option to succeed John Galliano as Dior’s couturier. Galliano was ousted in March in the wake of drunken racist and anti-Semitic outbursts, for which he was found guilty last week by a Paris court, given a suspended fine and ordered to pay costs and damages to three plaintiffs, as reported.

The designer’s move to Dior would be the catalyst for a domino series of moves at LVMH’s fashion houses not seen since the Nineties. Yet while that prospect continues to grip the fashion industry like a fever, it has caused barely a flicker in the financial community.

Shares in LVMH Moet Hennessy Louis Vuitton and Christian Dior SA have seesawed along with gyrating global markets in recent weeks, but without any remark or re-rating from equity analysts over the prospect of one of the highest-level games of designer musical chairs since the late Nineties.

For them, it’s practically a nonissue.

“In this day and age, for a brand the size of Louis Vuitton or Christian Dior, we tend to believe that artistic directors only account for a small portion of the brand’s attribute. We therefore do not immediately factor in a change in artistic director into our valuation of the brand,” said Antoine Belge, HSBC’s Paris-based head of consumer brands and retail equity research.

“I would probably not change my rating on LVMH or Christian Dior on the back of a potential move of Marc Jacobs from Louis Vuitton to Christian Dior,” agreed Pierre Lamelin, head of luxury goods research at Credit Agricole Cheuvreux in Paris. “Many other factors influence the decision to buy or sell a stock.”

WWD broke the news Aug. 22 that Jacobs was in talks to shift to Dior. According to sources, Dior president and chief executive officer Sidney Toledano is said to have recently spent several days in New York to meet with legal representatives for Jacobs and Duffy. The duo are believed to be looking for a salary somewhere in the low eight figures each, plus other benefits.

Meanwhile, it’s business as usual at Vuitton and Dior, which have declined all comment on the talks.

Jacobs — rushing to ready his signature collection for the runway in New York following delays he says were caused by Hurricane Irene — could not be reached for comment at press time.

Analysts stressed that designers are indeed factors in the success of luxury businesses — with important caveats.

“Marc Jacobs has an undeniable talent,” said Thomas Chauvet, luxury analyst at Citi in London. “His contribution to the success of Vuitton’s ready-to-wear collection is meaningful; however Vuitton remains a ‘maroquinier, with handbags and small leather goods accounting for over 75 percent of sales in our estimates. You are not buying a Speedy or Neverfull bag because of Marc Jacobs, but because of Vuitton’s product and service quality, heritage and recognizable patterns.”

“A successful brand is often the result of a complex chemistry between a talented manager and a brilliant designer,” added Cheuvreux’s Lamelin. “In that respect, Yves Carcelle and Marc Jacobs together form one of the most respected and probably one of the oldest ‘couples’ in the industry.”

Yet the success of a luxury brand is ultimately measured by its desirability and its economic performance over the long term, Lamelin stressed. “Strong brands will survive us all, including their artistic director. In a different context, I do not see Jean Paul Gaultier’s departure from Hermès as women’s ready-to-wear artistic direction as a threat to the brand, created 174 years ago.”

Analysts said they are not concerned about the prospect of a changing of the creative guard at Vuitton, even if it is seen as the cash cow of the world’s largest luxury group, generating the lion’s share of profits.

Alessandro Hor, senior analyst at Dominion Group, a London-based fund manager which groups its portfolio of luxury goods stocks such as Burberry, Tiffany, and LVMH under the CHIC banner, pointed out that Christian Dior Couture, the fashion house, accounts for just 3.8 percent of revenues of Christian Dior SA, the holding company of LVMH.

“If Jacobs were to take over John Galliano’s role within Mr. Arnault’s holding company, we’d see the move as a natural evolution of Jacobs’ career,” Hor said. “It would be a move like Galliano’s in 1995, when he went from the subsidiary company to the holding one. We do not envisage any major impact on the LV business. So, we will continue to hold it within our CHIC portfolio.”

“I think the transition at Vuitton would be very smooth if Marc Jacobs were to move to Dior,” agreed Citi’s Chauvet. “There is within LVMH an enormous talent pool with designers such as Phoebe Philo and Riccardo Tisci.”

As reported, Philo is at the top of the list of preferred candidates to succeed Jacobs at Vuitton should he move to Dior. However, the London-based designer, who has heated up LVMH’s Celine brand with her sleek, minimalist designs, has yet to commit to the project or enter negotiations, sources said last week.

A spokeswoman for Celine said the company does not comment on rumors or speculation.

“I can tell you that if the [Dior] move is confirmed, the financial community will be eager to discover Louis Vuitton’s new artistic director,” noted Lamelin.

To be sure, editors and retailers have been transfixed with the prospect of tectonic shifts at the highest echelons of European fashion.

Since then, Arnault has seen a revolving door of designers at some of his smaller brands, including Givenchy, Emilio Pucci and Celine. He’s been known to occasionally move around designers within his far-flung stable of fashion properties, famously moving Galliano from Givenchy to Dior (replacing him at Givenchy with Alexander McQueen), his once-prize couturier Christian Lacroix to Pucci and, more recently, Camille Miceli, Vuitton’s costume jewelry designer, over to Dior.

The luxury titan has occasionally experimented by promoting second-in-commands (Ivana Omazic at Celine) and tapping relatively unknown designers (Riccardo Tisci at Givenchy.) He recently recruited retailers Humberto Leon and Carol Lim of Opening Ceremony to revitalize Kenzo and reposition the brand in the burgeoning contemporary zone.

But Arnault has enjoyed stability at his biggest properties, including Fendi, where Karl Lagerfeld has designed furs and rtw since the Sixties — and mostly shown a preference for star designers, as the appointment of Philo in 2008 attests.

Dior executives have said repeatedly they will take all the time they need to find a new designer and consider all options.

As reported, Elbaz and Ghesquière, both of whom have equity stakes at their respective fashion houses and strong personal commitments to their brands, have withdrawn themselves from the running. Burton, meanwhile, is said to have rebuffed overtures.