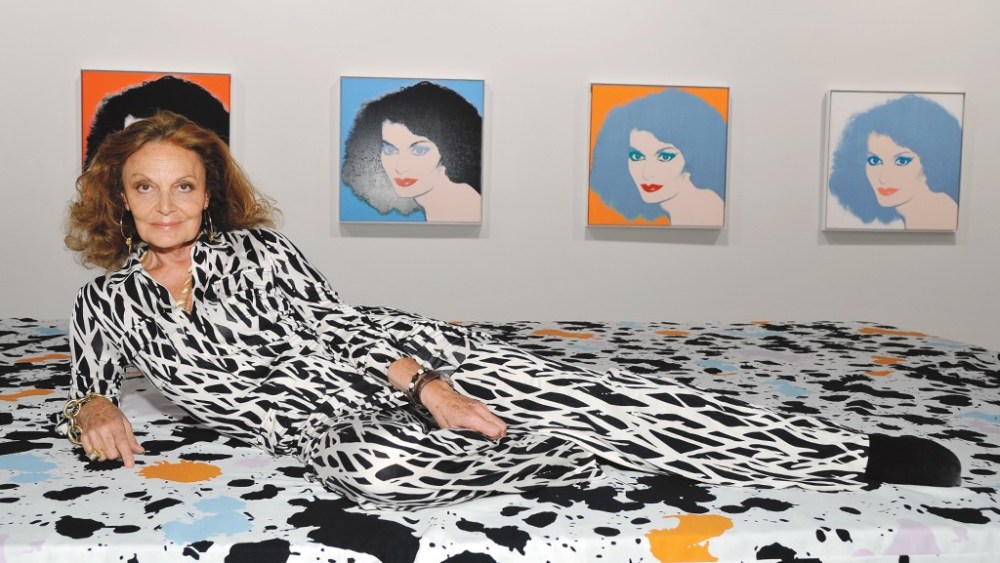 LOS ANGELES — How many times have the words “That’s a Wrap” been printed atop an article about Diane von Furstenberg? The headline is as obvious as the design of the dress — a direct descendant of the bathrobe — that put von Furstenberg on the map 40 years ago.

Whether “That’s a Wrap,” “It’s a Wrap” or “Wrap It Up” — choose your cliché — the item in question “took on a life of its own,” said von Furstenberg, reclining on an animal-print cube, surrounded by 200 vintage and contemporary versions of her iconic dress. “It made me live an American dream at the age of 26. That’s pretty major.”

“Journey of a Dress,” a retrospective of four decades of wraps, opens here Friday with a star-studded party at the historic Wilshire May Company building, former home of the May Co. department store and future Academy Museum of Motion Pictures. In addition to the dresses, the exhibition features a photo time line chronicling its greatest moments, from the first sample to the 1976 Newsweek cover to DVF’s first sketch for WWD.

It also features plenty of DVF herself: The mannequins are molded after her own face and her famous cheekbones. Then there’s the gallery of portraits of her by Andy Warhol, Barbara Kruger, Chuck Close, Francesco Clemente, Helmut Newton and Annie Leibovitz, to name a few. Also hanging are works from her personal collection by Anh Duong, Zhang Huan, Li Songsong and other contemporary artists. “A Ghost May Come,” a new piece by Dustin Yellin, has the likeness of a wrap dress suspended in glass, while illustrations from Antonio Ruben Toledo and Konstantin Kakanias round out the approximately 78-piece show. For Friday’s party, von Furstenberg commissioned a redux of Studio 54, where she was a fixture back in the day.

These are but a few of the trappings of the glamorous life of DVF, much of which is owed to her famous wrap. “I have had a very interesting relationship with the wrap dress because the truth is, it happened by accident,” she said. “First it was a little wrap top inspired by what ballerinas wear, with a matching skirt, and then I made it into a dress.”

At the time a newlywed, new mother and New York transplant, she was just 22 when she launched her first line, and 26 when she created the first wrap. She was in her 50s when she relaunched the wrap dress in 1997 after a decade-long absence from retail. It was again an instant hit, and the contemporary collection retails in 1,500 points of sale in 55 countries and 85 branded boutiques worldwide.

“The first time around, the goal was to be independent. The second time, my goal was to show the world it hadn’t been an accident the first time around. And now that I have a past, and it’s all here, now it’s about legacy, which is where I’m really going to put the engine forward so that I can leave something behind,” she said.

As she walked through the army of mannequins, DVF pointed out various pieces. “This very first dress in the front is from a woman I met at my Coral Gables store a few months ago. She was so proud she had found this in a vintage store and I recognized it from my first collection,” she said as she adjusted its cuffs. “And next to it is a dress that was designed last week and they both look so relevant.” She also came upon a yellow and white gingko-print short-sleeve dress that was worn by her mother, and a wrap jumpsuit in one of her favorite animal prints.

“Sometimes I’ve resented the wrap, meaning I design other things, but this is about honoring that dress which has given me my freedom, my independence, paid my bills, made me famous and all that,” she said. “Without Diana Vreeland, this would never have happened. She said, ‘This is genius, it’s so different’ and that dress is now in sociology classes. It has a life on its own. There’s no marketing plan, no logo design, there’s nothing that can make something like that happen. It happens on its own, and therefore I feel like it deserves a celebration.”

Von Fustenberg said she chose Los Angeles for the show because it’s a center for pop culture and the dress itself is a pop-culture icon. “And what more appropriate place than a department store where I sold my dresses 40 years ago, which is now part of the art community and will be the museum of the Motion Picture Academy. So it’s art, glamour, retail,” she said.

For the conception and design of the exhibit, von Furstenberg worked with exhibition designer Bill Katz, production designer Stefan Beckman, fashion curator Michael Herz, and for production, The Guild. In the entrance hall of the 20,000-foot space, which includes a pop-up shop, a photographic time line shows the first ads for Bloomingdale’s and Saks Fifth Avenue, a copy of a letter from Vreeland, Vogue’s first editorial and a runway shot of a 17-year-old Jerry Hall in a DVF show.

“Madonna when she goes to a press conference in Israel for her children’s book,” she said, gesturing to one photo. “Ingrid Betancourt, after seven years in captivity, that’s the first dress she bought. Amy Winehouse, and Mrs. Obama for her very first White House Christmas card,” she said of the other varied famous women pictured wearing her dresses. Also pictured are the wrap’s big-screen moments, from Cybill Shepherd in “Taxi Driver” to Amy Adams in “American Hustle.” “That was a gift,” she said of the three vintage dresses Adams wears in the hit film.

“I never try to make a major fashion statement but I want to be the friend in a woman’s closet,” said DVF. “I make dresses that women get laid in. When the workers here say, ‘These are the clothes we like women to wear,’ that makes me happy.”

The designer will also celebrate with a forthcoming book, “The Woman I Wanted to Be,” due in the fall, and throughout 2014 with Pop Wrap: a DVF and Andy Warhol Collaboration, a limited-edition collection of dresses, T-shirts and accessories created in collaboration with The Andy Warhol Foundation, that marries original DVF Chain Link and Twigs prints (she wore the latter on the Newsweek cover at age 27) with signature Warhol icons, flowers and dollar signs.

But the year could hold an even bigger milestone: an initial public offering, though she hedges to confirm it. “I am definitely interested in building this company into one of the leading global brands and I will do what is necessary to do along the way, but there’s no plan of anything other than we have to put our strategy together,” she said. “Accessories and retail are big expansions and how to link retail and Internet in an intelligent way, that’s what we have to figure out.”

Is she eager to have a piece of the action on the heels of record-setting IPOs from Michael Kors and Vince, which spelled major dollar signs? “People require capital and things like that, but right now we don’t require capital so it’s not like that,” she replied. “What I want is this company to last after me and continue to be authentic and to really stand for empowering women. We celebrate freedom, empower women and sell confidence. That is my claim to fame.”