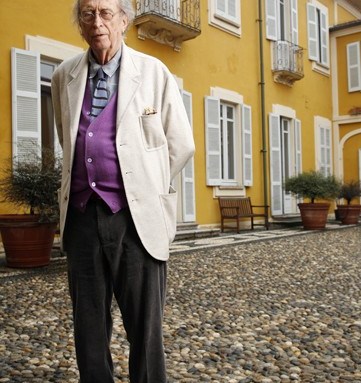 Strolling through his eponymous 134-year-old mill on a chilly winter’s day, he wears an ivory jersey jacket two sizes too big, layered over a vintage blue linen shirt, striped tie, violet cashmere cardigan, baggy beige cords and maroon Paul Smith sneakers. Not the sort of garb normally seen on a textile industrialist, but Solbiati is unlike other Italian weavers.

A film and literature enthusiast, Solbiati, in his 70s, dreams up most of his mill’s textiles and draws inspiration from art. Shuttling among his five creative offices stuffed with paintings, books and piles of fabric samples, he points out prized highlights including a pair of Ron Arad chairs and an 18th-century Turkish rug that decorates the glass-ceiling showroom. An African mask peers over locked cupboards containing designer-labeled men’s jackets in Solbiati’s fabrics.

Solbiati makes the 40-minute journey to the postcard-pretty factory near Malpensa airport six days a week from his Milan home. Sprawled over 140,000 square feet, its many buildings connect like a small village, housing offices, archives, weaving, sampling and creative space, all surrounding a charming courtyard. Guest rooms accommodate clients and a restaurant serves home-cooked meals. Some 330 employees help produce three million meters of fabric annually, with a sales volume of 40 million euros, or $51 million at current exchange.

Yet with its success, fabric wasn’t always in the cards for Solbiati. The law school graduate was coaxed by his father into the family mill five decades ago, with the task of getting the lagging business back on its feet. Solbiati’s first foray was in the late Sixties, enlisting textiles guru and friend Stefano Ottina to help revitalize the mill’s poorly-selling cottons. Together they created a successful line called Punch with closer-fitting shirtings, which got the mill in good financial standing.

While in a state of rebuilding, Solbiati observed that few of the nation’s mills were producing linen, the bast fiber of the flax plant and one of the oldest textiles around, which instead was imported from Ireland and France. “They were densely woven beige and blue linens mostly worn by lawyers in Naples,” explained Solbiati, “while white linen jackets were a symbol of elegance, famously worn by fascists, including Benito Mussolini.”

Solbiati decided to diversify the mill’s output with lighter weight, yarn-dyed linens in classic men’s wear patterns usually found in wools. The new fabric caught the eye of then up-and-coming designer Giorgio Armani, who used it for his trend-breaking deconstructed summer jacket in 1975. “The Biellese mills didn’t want to align themselves with fashion designers and they refused to sell them fabric,” recalled Solbiati. “I started selling to Armani and then Gianni Versace.”

Versace loved Solbiati’s creamy pin-striped linen so much, he whipped up an entire men’s collection of double-breasted suits with the textile in the early Eighties. Gianfranco Ferré, Missoni, Ralph Lauren and Calvin Klein followed suit, using Solbiati’s linens for looks to express a contemporary men’s elegance.

Then as more casual looks emerged in the Nineties, linen’s austere reputation was reinvented. “Wrinkling suddenly wasn’t a concern any more; linen fell off the podium of being this exalted fabric,” he noted.

Today, as the pendulum shifts from carefree to careful, Solbiati is reinforcing its linen-based men’s wear fabrics, alongside cotton and silk, in a spring-summer 2010 collection to be shown at Milano Unica, from Feb. 3 to 6. Among the fabrics are pure linen tweeds for interseason jackets; linen herringbones that are brushed for a lived-in, vintage look, and pure cotton seersucker woven on looms, unlike the chemically treated variety.

To enhance the line, Solbiati enlisted Aimone Sambuy, formerly of S.I.C. Tess to oversee shirting fabrics. Clean checks, stripes inspired by vintage designs from Jermyn Street and solids in magenta, powder blue, citron yellow and white variations underscore the collection, which is woven in diverse weights including elegant, filmy voiles, as well as very fine blends of cotton on the warp and linen on the weft.

“During a moment of difficulty there is a need to return to the classic, to tradition,” explained Solbiati. “Linen has evolved. It doesn’t hold the same glamour as the past, but it is nonetheless an extremely elegant and wearable fabric.”