In the season’s most anticipated show, Nicolas Ghesquière puts his own imprimatur on Louis Vuitton.

By Miles Socha and Jessica Iredale on April 14, 2014
View Slideshow 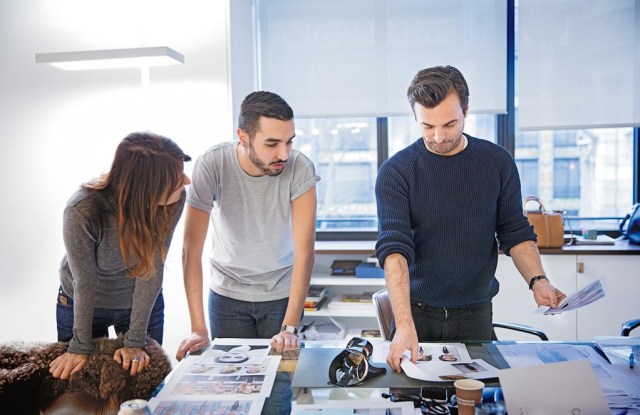 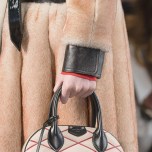 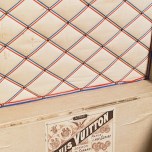 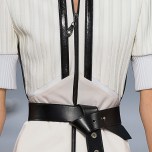 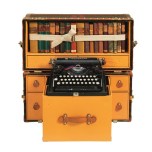 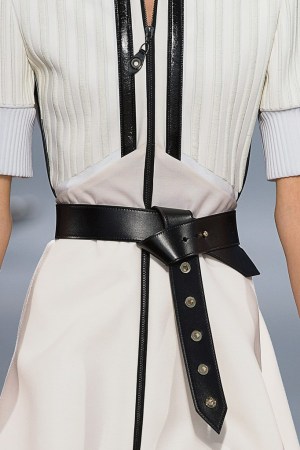 Leather belts in the collection were inspired by the cloth strap anchoring books in this library trunk. 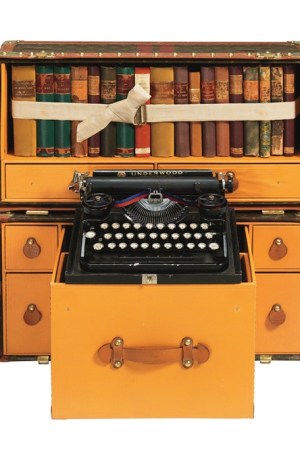 Leather belts in the collection were inspired by the cloth strap anchoring books in this library trunk.

There was intensive research and dazzling experimentation behind the ready-to-wear Nicolas Ghesquière turned out during his 15-year career at Balenciaga—and his shows always delivered a strong dose of fashion with a capital F.

Yet backstage after his debut at Louis Vuitton, it was another F word—function—that came up time and again as the Frenchman discussed his approach to the storied house, marking its 160th anniversary this year.

“Our first season was an opportunity to set up and to capture what would be the key elements for the future,” he says, perched on a retro sofa in Vuitton’s loungelike “green room,” where celebrities cool their jets before facing the crush of photographers in the show space. “I didn’t try to tell a story.”

Instead, Ghesquière considered the women in his personal and professional milieu—Camille Miceli, Marie-Amélie Sauvé and Charlotte Gainsbourg, who is tipped to be among the stars in his first ad campaign—and a “wardrobe” that would suit them.

“So I listened to them, I collected little things from all of them and mixed it up,” he explains. “The clothes had to be functional.”

Ditto for his first handbags, headlined by miniature trunks like the one Delphine Arnault, Vuitton’s second-in-command, cradled in her slender arms as she greeted such guests at the show as Charlene, Princess of Monaco.

“Again, function,” he stresses. “I was like, ‘How this can travel from the trunk, and what it can say today?’”

Ghesquière put a thin leather strap on his Mini Malle clutches, adding the versatility of toting it on the shoulder like a camera bag of yore, heightening the Seventies vibe of his fall collection, hinged on wearable clothes of the sort cool girls crave. “So a small bag for the day and how you can carry this in a very cool way, and very functional way, too,” he explains.

Craftsmanship was another fixation for Ghesquière. In tandem with his arrival at the luxury powerhouse last November, Vuitton engaged French photographer Gérard Uféras to shadow Ghesquière as he became acquainted with the vast company, the flagship brand of luxury goods giant LVMH Moët Hennessy Louis Vuitton. The sleeves of his sweater always rolled up, the designer can be seen poring over fabric swatches, leather samples and shoe sketches—the picture of intensity.

Part of his immersion in the company’s culture was a trip, his first week on the job, to its museum and workshops in Asnières, where special-order leather goods and bespoke trunks are realized.

Vuitton’s savoir faire in handbags, which account for the lion’s share of its business, certainly captivated Ghesquière, who brought in a number of those artisans to work on some of the clothes.

“I thought it was interesting to ask them to do some things that they are not used to doing,” he explains. “This was a great process for me.”

While leather was a predominant feature of the collection, from the flaring coat on Freja Beha Erichsen that opened the show to the sexy, lingerie-style dresses grafted to tweed, there were three polo dresses with flaring collars and zippered closures that bear the imprint of the leather-goods artisans who painstakingly pieced glossy leather strips on the denim-blue suede bib fronts.

According to Michael Burke, chairman and chief executive officer at Vuitton, Ghesquière is taking an approach completely different from that of his predecessor Marc Jacobs. During his 16 years as Vuitton’s first artistic director, Jacobs would lead the 19th-century trunk maker into the modern fashion age by introducing rtw, footwear, jewelry, scarves and all the other categories that are par for the course for a global brand today.

Jacobs did so in a freewheeling way, sending out fashions that were streetwise one season, coquettish the next, and perhaps demure and womanly the season after.

Now, however, “It has to balance between newness and heritage at the house,” according to Burke.

Under Jacobs, the dial was cranked way up on newness. As there was no fashion vocabulary à la Chanel to follow, the elusive Vuitton woman “could be anybody at this point, and he had fun with it,” Burke says of Jacobs’ approach. “He made us credible, because 16 years ago, we didn’t exist in fashion.”

That means it’s up to Ghesquière to “write a language” for Vuitton, including defining what a “suit” from the brand looks like and who the customer is—all the while taking into consideration the “long shadow” thrown by its legacy in trunk making and leather goods.

How far Ghesquière plunged into Vuitton’s heritage was not obvious as models whisked through the tent constructed in the Cour Carrée at the Louvre, rapid-fire shows being a habit he kept from Balenciaga.

But he went deep into the archive, culling visual signatures that are firmly rooted in Vuitton’s history, though not as widely known to the broader public as its famous monogram canvas. These new codes could help the brand as it seeks to cultivate a more upscale, exclusive reputation after years of rapid expansion and a heavy reliance on logo canvas.

Vintage trunks by French banker and philanthropist Albert Kahn, a Vuitton client starting in 1896, were a font of inspiration. Kahn preferred bright red Vuittonite canvas and three hand-painted Xs to identify his trunks, features Ghesquière reprised on his Mini Malles. Some of these came sheathed in canvas, a wink to the protective covers used on leather Vuitton luggage in the 19th century.

Other archival elements Ghesquière brought to the fore include:

• The quilting inside old steamer trunks was used as a surface texture on leather handbags and suede skirts, plus as a pattern on the insoles of some shoes.

• The unique color of the natural cowhide leather that features as handles and trim on monogram bags—known as VVN for “vache végétale naturelle”—reappeared in various materials, including alligator and wood-grained Epi leather, and used on handbags and clothes, often as collars or trim.

• Straps inside trunks to secure the contents during transport inspired the harnesslike lacing on shoes and booties; twisted belts echoed the appearance of straps that anchored books in “library” trunks Vuitton made for famous clients, including Ernest Hemingway.

• The encircled LV logo that figured on show invitations, and will appear on sweaters, was previously only used on the locks for trunks, when Gaston-Louis Vuitton secured patents for unbreakable locks, and locks in series that could open with a single key.

• The Neo Marceau bag, a trapezoid satchel with angular handles reminiscent of Ghesquière’s Star Wars style at Balenciaga was actually inspired by an archival style from the Fifties.

And so Ghesquière scoured the past to bring Vuitton into the future. In the broadest terms, Burke says the designer’s remit was to invent “audacity that leads to eternity.”

It was a subject Ghesquière addressed in the small, typewritten letter he left on every seat at the show, asserting that his “stylistic expression is at one with the Louis Vuitton philosophy.…The quest for authenticity and innovation. The desire for timelessness. Does not every designer ultimately seek to create something timeless?”

Perhaps the most surprising things about Ghesquière’s debut were the low-key show set—a landscape of beige bleachers and a glass-walled tent whose vents opened to reveal daylight—and that the futuristic gloss that defined his work at Balenciaga was teleported away.

Asked if he was conscious about “not doing Balenciaga” and distancing himself from that level of fashion innovation, he muses: “Well, I am what I do myself, so I don’t know if you do it consciously or not. But I try to express my point of view on fashion. And what is extraordinary with Vuitton, because it’s a big, big, big scale, is that you can imagine so many stories. It’s about multiple types of women; it’s a different profile of women. So this is very new for me. In a way, I didn’t have to think about distancing.”

As for how he defines the Vuitton woman, he replies: “I define her in a mix. She is really cool with mixing causal clothes with embellishments. The only thing is the expectation of the luxury and the way it’s done. So it’s really someone that has a real taste for mixing.”

Yet given Ghesquière’s meticulous approach to fashion, it’s hardly an anything-goes situation.

As the lineup of fashion designers who attended his Vuitton debut attested, Ghesquière ranks among the rare few you might call a designer’s designer.

“I love his work,” enthuses Jean Paul Gaultier, under whom Ghesquière worked early in his fashion career. “It’s very interesting and very clever.”

Young London designer Jonathan Anderson of the J.W. Anderson label is even more to the point.

“I really respect what he’s done, and I think he is extremely important in this industry. I think designers need other designers,” he says. “I think he pushes, and I think fundamentally I can say he’s just got a very sharp approach to things. There’s no dicking around.”