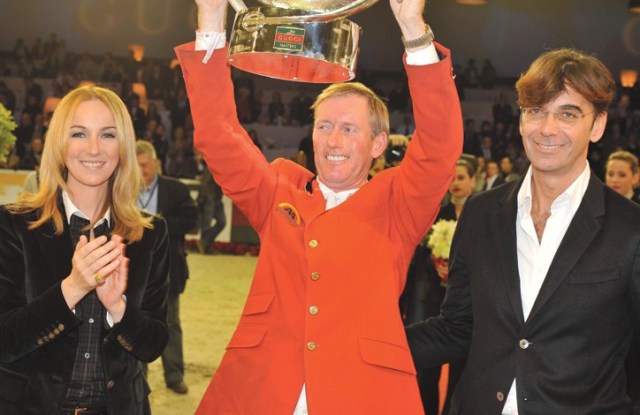 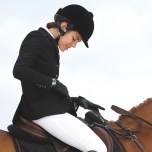 Gucci’s signature horsebit, used in the fifties on a shoulder bag and then on the classic Gucci loafer, remains one of the most recognizable symbols of Gucci’s ties to the equestrian world.

Unlike some opportunistic sports sponsorships, the marriage between Gucci and the equestrian world has cultural resonance. The bar-and-bit symbols on shoes and bags and the red-and-green-striped web girth strap trace their origins to the founding of the brand in 1921.

The Florentine house’s continued affiliation with the equestrian world is spurred on by Gucci creative director Frida Giannini, a horse enthusiast herself who started riding at the age of six and competed in show jumping in her teens.

In December 2009, Gucci rekindled its sponsorship of equestrian events after a 20-year hiatus, choosing international horse jumping with the European Equestrian Masters, now dubbed the Gucci Masters. The event, which has five competition categories including the new Gucci by Gucci challenge, garnered such significant coverage that the house signed on again for this year. It will take place in early December at the Parc des Expositions in Paris Nord Villepinte.

Charlotte Casiraghi, amateur show jumper and the daughter of Princess Caroline of Monaco, last May was tapped as the brand ambassador for Gucci’s equestrian ventures, joining Virginie Couperie-Eiffel, who has been an official ambassador since Gucci started sponsoring the international event.

For the Gucci Masters last year, Casiraghi competed in the Style and Competition category wearing an exclusive bespoke riding wardrobe by Giannini for the four-day event. Attire included a fitted black blazer with a piping detail on the pocket in the Gucci web colors, as well as an engraved halter for her steed.

“As I sat with Charlotte to design her show-jumping wardrobe, there was a natural connection and understanding between us, which made working together absolutely seamless,” according to Giannini.

The Gucci Grand Prix carries a bountiful award of 300,000 euros, or $389,070 at current exchange. Last year it was won by Marco Kutscher of Germany.

The Parc des Expositions center this year will again play host to the prestigious event, which typically attracts 40,000 spectators to see some of the world’s best show jumpers compete.

Gucci also opened a temporary retail outpost at the Villepinte site stocking a special edition silk scarf and made-to-order boots, along with a selection of current pieces from the house’s main collection and vintage pieces.

On the horse racing front, last year, Gucci was also sponsor to the Melbourne Carnival Cup, while one of the events was named the Gucci Stakes on Oaks Day, which is traditionally held three days after the Melbourne Cup.