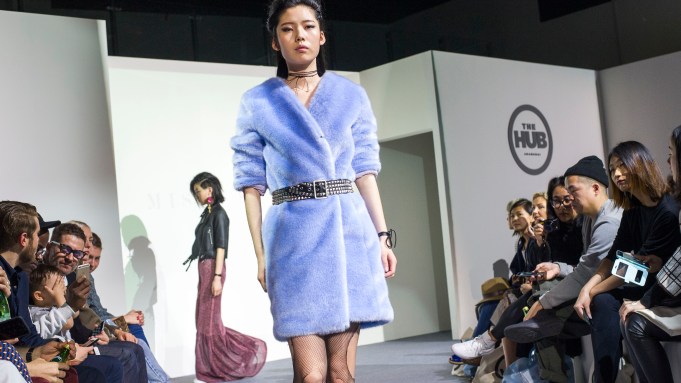 SHANGHAI — The Hub, a trade show focused on bringing independent international brands to the Chinese market, branched out with a schedule of runway shows for its second Shanghai edition.

Running April 9 to 11 and coinciding with the first weekend of Shanghai Fashion Week, when fashion buyers and press from around China and the world descend on mainland China’s financial capital, the latest edition of The Hub had a particular focus on promoting British brands as the event was supported by the United Kingdom’s “Fashion is Great” campaign.

A schedule of catwalk shows was also added to The Hub’s lineup to help attract industry eyeballs.

“We felt we have to do something that is more theatrical; to give people a reason to come, that’s the reason for the catwalks,” said show organizer Richard Hobbs, who launched The Hub with Peter Caplowe in 2013. The event’s first few seasons were hosted in Hong Kong before a move to Shanghai for the spring edition of the biannual event last October.

In all, nine shows were on The Hub’s schedule over three days, including London-based brands Sibling and House of Holland, as well as local names such as Beijinger Simon Gao.

“Sid [Bryan] and I jumped at the chance to bring Sibling to China which is a very new market for us but which has been — editorially and social media-wise — very supportive. We’d been approached before, but frankly the setups never felt like the right ‘fit’ until now,” said Sibling cofounder Cozette McCreery.

“We’ve met some great people, some of whom may lead to consultancies or collaborations. All early days yet but if we hadn’t been here with product and creating a buzz for that product via a catwalk show these introductions would never have happened,” McCreery added.

Organizers hoped that high quality of the shows — and those at The Hub often outshone the ones at the main tents of Shanghai Fashion Week, just down the street from the trade show’s venue — would also lead to business.

“The addition of the catwalk has definitely brought in higher-quality buyers and press. We’ve given another reason for people to come here and interact with our exhibitors, so hopefully that leads to good business. I have heard from people who have been with us since the start that they got three new customers on the first day, so that’s vindication for us,” Hobbs said.

There has been a proliferation in recent years of multibrand stores in China — both brick-and-mortar and e-commerce sites — looking to stock independent Chinese and international brands. This trend has been accompanied by the sprouting of more and more fashion-related trade shows and showrooms, particularly coinciding with Shanghai Fashion Week.

What seems to set The Hub apart for buyers is its focus on international brands and the fact that it’s a more selective experience than is common in China, where trade shows can be a free-for-all with many hundreds of exhibitors, thousands of visitors and limited opportunities to make meaningful connections.

In its first Shanghai iteration, The Hub halved the number of brands exhibited to 40, and this time around that number grew only a little, to 50, though Hobbs said they eventually would like to grow that number to “around the 150 to 200 mark.”

For exhibitor Jamil Juma, who was at The Hub representing labels he stocks at multibrand stores in Tianjin and Dalian, the smaller size and more curated nature of The Hub were assets, as was the timing, coinciding with Shanghai Fashion Week.

“Shanghai and China in general are maturing. There are more multibrand stores, but also more awareness of different brands generally,” Juma said. “We want to get to know more China-based buyers. Things have changed significantly over the past year and things move very quickly here so we just want to be at Shanghai Fashion Week, be here and stay on top of what’s happening.”