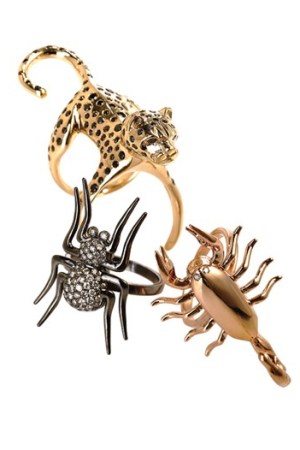 Jack Vartanian is taking his jewelry cues from the rain forest. This month, the São Paulo-based designer will launch Menagerie, a collection inspired by the rain forest’s “icons of strength”—the leopard, the scorpion and the spider. The nine-piece group offers Vartanian’s signature Art Deco aesthetic infused with a little edge. “I wanted animals with attitude and sex appeal, something almost frightening. These animals are fast, agile and dangerous,” said Vartanian, who hopes the brand’s followers will gravitate toward the power message behind the creatures.

Each animal comes in three variations—ring, necklace and earrings. The spiders are made of black gold, the scorpions are rose gold and the leopards are yellow gold with black diamonds as spots. Retailing from $1,000 to $9,000, 10 percent of proceeds benefit Panthera, an organization committed to conserving the world’s endangered cat population—including leopards, jaguars and tigers. Looking ahead, the designer said he hopes to add a Los Angeles boutique to his roster—given his growing celebrity clientele—joining his stores in New York, Rio de Janeiro and São Paulo. Menagerie is available exclusively at his shop on Madison Avenue in New York and at jackvartanian.com.

The Jimmy Choo woman now has her man. The British brand is introducing men’s shoes for fall and already counts Mark Wahlberg among its fans—the actor wore a pair to this year’s Academy Awards. But Tamara Mellon, founder and chief creative officer of Jimmy Choo, says the company’s Italian-made lace-ups, loafers, sneakers and boots aren’t just for Hollywood’s hot list. “Whether he’s an artist or an investment banker, the Jimmy Choo man exudes confidence and style,” she says. “Attention to detail in his accessories is important to him and distinguishes him from his peers.” ($595 to $1,095, jimmychoo.com.)

The Warby Parker guys are at it again. The philanthropically minded makers of optical frames at a nice price are launching sunglasses in May. The collection has an oversized Eighties glamour appeal and comprises 10 frames; five unisex and five women’s styles in colors such as gray horn and blue smoke, retailing for $95. “They are indeed more glamorous” than the optical frames, says Neil Blumenthal, a founder, adding the sunglasses “allow us to discreetly stare at others.” The frames will also be sold with ophthalmologic lenses starting in early summer. And, in keeping true to their vision, for every pair purchased a pair will be donated to charities like restoringvision.org. Now that’s some cool peepers.

The Shape of Things to Come

Tod’s, which cracked the $1 billion sales mark last year, aims to keep up its momentum this fall. Designer Derek Lam says the house’s accessories for the coming season are “witty, unpretentious,” and full of color and texture. “These two-tone clutches in exotic croc are both chic and utilitarian—and can actually fit things today’s women need, like a wallet, without sacrificing style,” he says. ($1,845 at Tod’s nationwide, 800.457.TODS.)

If The Shoe Fits

For West Coast Shoe Company founder John Henry Shoemaker, making footwear was inevitable. Now, after 93 years of crafting tough workboots, the Scappoose, Oregon-based firm is courting the ladies with the launch of Van Spijker custom shoes and boots. Van Spijker (the maiden name of Shoemaker’s mother) recalls the aesthetic of the Victorian era—covered leather buttons, brass details, working buckles—with a modern edge. Clients can have lasts made for their feet for $100 or order a standard last, and choose from a range of colors. Prices range from $1,240 to $1,800.

Who says fine jewelry has to be so serious? Several high-end jewelers have loaded their latest collections with quirky Pop Art images, animals and other fun elements. Solange Azagury-Partridge has assembled quite a menagerie from Chinese zodiac symbols as well as her signature rainbow and luscious lip motifs (ring, right, $18,200). Suzanne Syz cooks up delectable candy pieces with interesting precious stones (price on request), buzzing bees on honeycombs inspired this season’s Delfina Delettrez creations (necklace, above, $2,850), and Qeelin’s signature BoBo bear plays dress up with a ballerina and clown costume (about $23,000).

Pasquale Fabrizio, Hollywood’s unofficial cobbler to the stars, is taking his own turn in the limelight with a limited edition shoe featuring Murano glass. But the designer is after more than a storybook ending. For his bigger Q by Pasquale collection, available in June, he’s dropping the more artistic styles in favor of rubber-coated stacked heels, boots and wedges detailed in silver, 24-karat gold leaf and mother-of-pearl accents ($520 to $1,110, qbypasquale.com). “The first styles were artistic and an expression of exploring glass,” Fabrizio says. Of course, there are still plenty of looks fit for royalty—Hollywood or otherwise. His knee-high macramé sandal woven around handcrafted pieces of glass is priced at $6,500.

Settled comfortably on America’s East Coast, Longchamp, the quietly successful family-owned French leather house, has its sights set on conquering the West. A 2,000-square-foot store is slated to open in South Coast Plaza, in Costa Mesa, Calif., in May, joining 200 points of sales and nine stand-alone stores in the U.S. and Canada. The house credits its Kate Moss for Longchamp handbag line for significantly boosting business—sales spiked 23 percent last year, to about $450 million. Moss, who has been designing the collection for the house for the last three seasons and has an open contract with the firm, also produced the company’s best-selling leather bag for the year: the Gloucester. Longchamp in March launched a two-minute digital ad campaign on its Web site for Moss’ spring collection, starring the supermodel channeling a Sixties Bohemian vacationing in Morocco. Titled “Faraway,” the work was directed by Alasdair McLellan using a grainy Super-8 effect.

Fit to Be Tied

The bow tie is hot again. No longer relegated to the necks of geeks— thanks in part to retro-mania à la Mad Men and chanteuse Janelle Monáe—the perky add-on can be found in a ceramic version from upstart Italian brand Cor Sine Labe Doli. The company was started in January by three childhood friends—Antonio Patruno Randolfi (designer), Luigi Arbore (marketing) and Massimo Mazzilli (management)—who grew up in the southern Italian town of Corato. The label takes its name from part of the town’s motto, which in Latin means “a heart without betrayal.”

Launched with ceramic bow ties, necktie knots and pocket squares aimed primarily at men, a unisex fra- grance, Eloquium, and men’s shirts quickly followed. The partners realized the bow ties made perfect chokers for women, so they created the Femina line of ceramic ribbons, resembling bows on a chain. The ties and ribbons are made from Italian ceramic produced in Marostica, near Venice, with colors including silver, gold, burgundy and navy ($141 to $211, corsinelabedoli.com).

Shoe designers are taking the plunge. Giuseppe Zanotti gives brides his signature crystals and Bettye Muller offers just the right amount of lace, pearls and vintage fabrics for the big day. But others are joining the bridal party as well—from Loeffler Randall and Ivanka Trump to Charles David and Beverly Feldman. Even Nina Footwear, traditionally a go-to brand for wedding heels, adds French lace veils, crystal jewelry and bling-embellished sashes and headpieces.