The New Face of Façonnable

The French luxury brand is embracing its roots as it steps out with a new creative director, a new high-end collection and revamped store presentations. 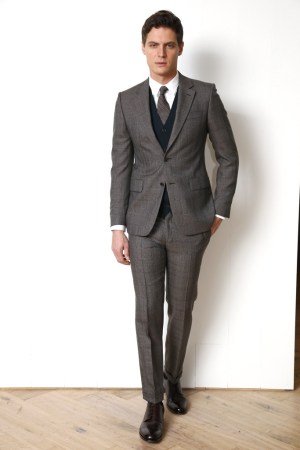 Façonnable is embracing its roots as a French luxury brand as it steps out with a new creative director, a new high-end collection, an updated marketing plan and revamped store presentations.

“We’re coming back to the roots of the brand,” said Ludovic Le Gourrièrec, who joined Façonnable in July as deputy managing director. “We want to be the brand of the French Riviera.” Façonnable was founded in 1950 by Jean Goldberg and is based in Nice.

Le Gourrièrec said Lebanon-based M1 Group, which bought the company from Nordstrom in 2007 for $210 million, has a “real willingness to upgrade the brand” and is investing heavily in its future. “We want this company to be profitable in three years and be a leading brand in the market for men’s wear.”

The first step in that journey came this week when the label took the wraps off the debut collection designed by Daniel Kearns, who joined the company in September as its artistic director. The Dublin-born designer had worked previously at Yves Saint Laurent, where he was men’s wear design director under Stefano Pilati, and had also worked with John Galliano to launch that brand’s men’s wear in 2002. Three years later, Kearns joined Lee Alexander McQueen to become his design director for his men’s wear until McQueen’s death in 2010. He has also designed travel and sailing collections for Louis Vuitton.

Under Kearns’ direction, Façonnable has segmented its line into two distinct collections: the newly created F.Façonnable, which encompasses sportswear and accessories and replaces Façonnable Blue and the company’s denim offering, and Façonnable. The latter has a new label that encircles the Façonnable name in an oval and includes the words French Riviera underneath. Façonnable is a higher-end offering that includes a heavy dose of tailoring — a category that the brand had only dabbled in in the past.

Kearns said he drew inspiration for the collections from the company’s archives and sought to provide “one coherent line” that bridges both tailored and sportswear. To produce the collection, the company reunited with Cantarelli in Italy — a company that Goldberg had used as well.

In building the premium line, Kearns said the goal was to create a “contemporary gentleman’s wardrobe with a focus on lifestyle over a high-fashion brand and a strong association with the French Riviera. That’s the original DNA of the brand.” Key pieces include wool outerwear with a waterproof membrane lining that can mix seamlessly with the more “sartorial” pieces such as soft-shoulder suits, engineered Prince of Wales-patterned sport coats and blouson shirts. An iconic brass-button blazer is also offered as are tuxedos with built-in cummerbunds and a navy cocktail suit with cut-out shawl lapels.

“The idea was to be the crème de la crème and the entry price for first-line stores,” said Le Gourrièrec. In New York, the company was showing the collection to Saks Fifth Avenue and Barneys New York this week and will bring it to European retailers next week.

Le Gourrièrec said the company will launch a “huge ad campaign” in the spring “to announce the new story.” Next year will also reveal a new retail concept that Façonnable will use at a flagship it is opening in Moscow in June. The company operates 80 owned and franchised units around the world.

Kearns will unveil his first women’s collection for Façonnable in January.