WWD gets the scoop on these ones to watch.

By Kristi Garced and Jessica Iredale and Mayte Allende on November 26, 2014
View Slideshow

WWD gets the scoop on these ones to watch. 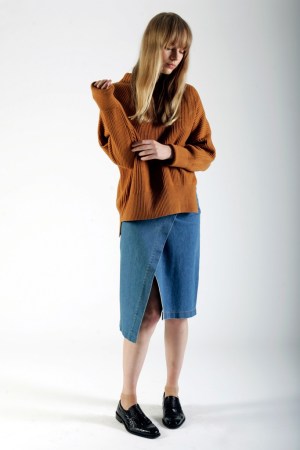 This story first appeared in the November 26, 2014 issue of WWD. Subscribe Today.

BACKGROUND: Macdonald, a former carpenter at a high-end custom furniture shop in San Francisco, moved to Los Angeles to open a designer boutique called Foundry in 2012. After designing a capsule collection to be sold in the store, he realized his true passion was design and refocused his career.

POINTS OF SALE: Exclusively at NastyGal.com this spring.

BACKGROUND: Gilbert, a third-generation denim maker, founded Paper Denim & Cloth in 1999. She met Noyes, who started her career in sales at Prada USA, while Noyes was working at Hatch Showroom.

VISION: “Utility and style [were] at the root of American sportswear when it launched — like, say, an evening gown with pockets,” Gilbert said. “M. Martin is about that day-to-night ease. It’s laid-back luxury for confident, strong women like ourselves [who] have multipurpose lives and still want to feel chic and pulled together.”

POINTS OF SALE: None yet.

BACKGROUND: With a law degree and no formal design training, Folawiyo began designing clothes at home after taking time off from working at a law firm.

VISION: “To create beautiful, modern pieces for global women across the world,” said Folawiyo. “This vision has always been fueled by the need to transform and redefine the idea of African fashion.”

POINTS OF SALE: ModaOperandi.com and ShopBazaar.com for spring.

BACKGROUNDS: Following her graduation from Duke University, Deane entered the finance world, but ditched it to pursue a career in fashion. She tapped her friend Park, a stylist, to help develop the brand. Together, they appointed the design team: Lawlor formerly designed at Diane von Furstenberg, while Ghofrani held design roles at Vera Wang and Marchesa.

VISION: “We never want Öhlin/D to be about severity,” said Park. “It is fun, fresh and easy. The collection is less about identifying trends and more about finding a second skin.”

BACKGROUND: Tokimoto Davis grew up in Japan, where she attended Bunka Fashion College, graduating in 2004. She worked locally as a knitwear designer for five years before moving to New York in 2009, when she joined United Bamboo.

VISION: “My core elements are something organic contrasted with the unusual,” Tokimoto Davis said. “A lot of it comes from my roots, the Japanese aesthetic.”

BACKGROUND: After graduating from Syracuse University with a degree in fashion design, Hankin held women’s design roles at J. Crew and Ralph Lauren.

VISION: “I’m focused on creating pieces that are progressive yet timeless, forming a wardrobe of elevated essentials that express an effortless modernity,” Hankin said.

BACKGROUND: With a dual degree in psychology and art history from Lafayette College, Mendelsohn moved to New York to pursue fashion and held top sales and merchandising roles at Calvin Klein Collection, Marc by Marc Jacobs, Thakoon and Michael Kors.

CONCEPT: New York-based line of colorful, accessibly priced tops and dresses named after Mendelsohn’s two children, featuring original prints. In partnership with The Hope Foundation School in Bangalore, India, one hot, nutritious meal is provided to a child in need with every item sold.

VISION: “Because I was targeting top-tier department stores, I knew that the product had to be elevated in design,” Mendelsohn said. “My customer is looking for something sophisticated, but the price point is what makes it accessible. And I don’t skimp on quality by giving that to her.”

BACKGROUND: Feiner studied couture and textiles at the London College of Fashion and held design internships at Vera Wang, Preen and Jill Stuart before landing a merchandising job at Burberry.

VISION: “We’re making these clothes for a feminine, classic woman,” Feiner said. “It’s about the places we go, where we want to go and how we want to feel. The whole thing was about my mood and who I wanted to be and how I wanted to look. It’s about making memories ­— really living in your clothes.”