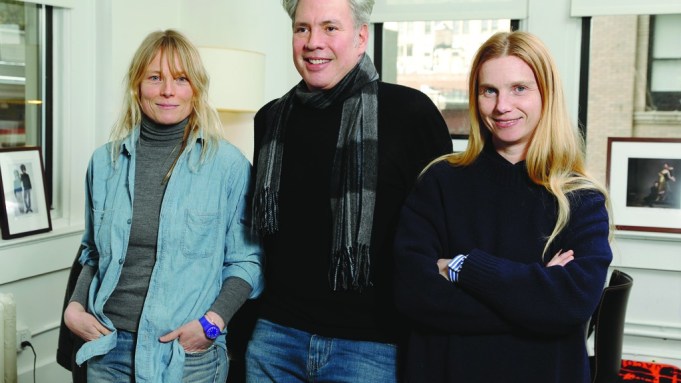 Marc Jacobs, the man as well as the company, is living in a post-Louis Vuitton world. It’s a pre-IPO world, if all goes according to plan for Jacobs and his business partner, Robert Duffy.

The first means to that end is revamping Marc by Marc Jacobs, the revenue engine of the brand. According to Duffy, Marc by Marc Jacobs accounts for 70 percent of the entire business, which stood at $750 million in net sales last year and is on track to hit the billion-dollar mark “soon,” said Duffy.

“In the big picture of this new Marc Jacobs company, Marc by Marc Jacobs probably plays the biggest role,” said Duffy earlier this week. “It’s the most profitable part of our business. The sky’s the limit. We’re really going to pull out all the stops for Marc by Marc Jacobs, which we haven’t in the past.” By Duffy’s own admission, he and Jacobs had “dropped the ball” when it came to the contemporary line, losing market share to the stiff competition in a category they once owned. When Marc by Marc launched in 2000, there was no Rag & Bone, Alexander Wang, etc. A new showroom has now been designed. There are plans for new packaging, new advertising, new store concepts, including an uptown flagship in New York City, and potentially a new name for the collection. With the exception of the showroom, all of the above can be filed under “in discussion.”

In the meantime: the clothes. The real suggestion of a concrete business strategy — the company has traditionally operated on an instinctual basis — came in May with the hires of Katie Hillier and Luella Bartley to the roles of Marc by Marc Jacobs creative director and design director, respectively. Their mission is to reestablish the line as a real fashion collection, reflective of the original attitude that drew a tribe of loyal followers. Their vision will go public Tuesday at the women’s-only runway show.

“We decided who we wanted the girl to be again based on her a long time ago versus now,” said Hillier during a preview. “It’s not her then, it’s her now.” Hillier, who has overseen handbags and accessories for Marc by Marc for more than 10 years, is focused on strengthening its commercial offering. She noted that a lot of the washed twill and canvas pieces that were a core product a decade ago are back. She also pointed out the range of Breton-stripe shirts and Ts with graphics done by Palace Skateboards artist Fergus Purcell. Believe it or not, T-shirts are a new addition to the line. “When you think about the way Marc designs stuff, it’s always the most perfect shape of something,” said Hillier. “It’s like, ‘Well, it’s just a T-shirt,’ but we didn’t have any classic, perfect T-shirts. We put a lot of energy into the basic stuff in the beginning.”

Hillier is also in charge of bridging the runway and the store, where lately there’s a been a disconnect. She brought on Bartley to define the collection’s editorial point of view, which this season has to do with ninjas, samurais and BMX biker chicks. Many of the looks are styled with big obi belts, colorful sneakers with thick gridlike soles, and all manner of new bags, watches and jewelry for “festooning,” as Hillier said. “I started with Power Rangers,” said Bartley. “That was a bit silly, but I wanted to get across this youthful but strong attitude. It’s important to get her across as a girl with character and independence from other girls.”

As for Jacobs’ involvement, he met with Hillier and Bartley in London, where they’re both based, for ideas and approval. Longtime collaborator Venetia Scott is still styling the collection, so there’s consistency there. But the new Marc by Marc does appear to be a sovereign entity within the new republic of Marc. “The collection needs to stand on its own,” said Bartley. “It’s special because it’s [Marc Jacobs] but we can also make it stand out in its own right.”