The Next Step for Gregory Parkinson

The designer is launching a lower-priced contemporary collection. 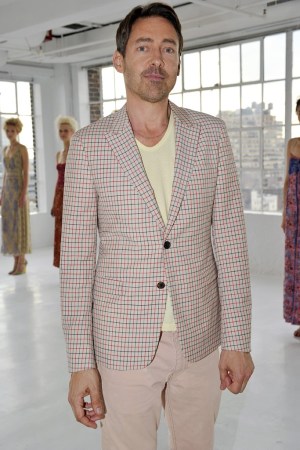 NEW YORK — After a successful collaboration with Anthropologie earlier this year, designer Gregory Parkinson realized there was a market for his handcrafted sort of clothes at a more accessible price. GP Gregory Parkinson is the result and launches for the spring season.

The 60-piece collection will wholesale from $50 for a pair of cotton shorts up to $260 for a silk and linen maxidress. Most of the pieces feature prints the designer developed in-house and offer the kinds of details his customers have come to expect, such as feminine shapes and raw edges. “In this market, a lot of the fabrics are really standard,” said the designer from his atelier in Los Angeles. “I wanted the prints and the fabrics of GP to be as interesting and special as possible. They are beautiful, but they are also practical and easy to take care of,” he noted.

When it comes to sales, Parkinson chose The Collective, a boutique agency in New York, because of their like sensibilities. “Let’s face it,” said partner Kimberly Wesson, “about 20 stores in the world can do his main line, which wholesales from $900 to $1,750.”  She noted they are being strategic about positioning and will be pushing the designer to go out of his comfort zone in coming season with things like knits. “We will still be in top tier stores, but much more accessible.”

Aside of the resources, noted Parkinson, most people don’t have the kind of lifestyle that requires dresses for special occasions, and this new line answers that. “Besides,” he said, “I’m still a little under the radar, which I think is a great advantage because women want to feel individual.”