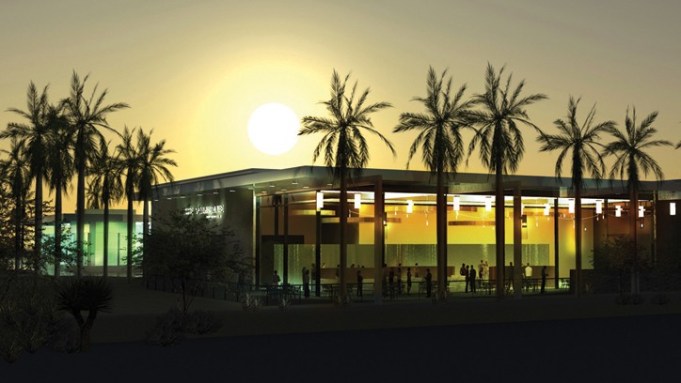 The battleground for luxury retail tenants in the Arizona desert has shifted from north Phoenix to downtown Scottsdale.

The Palmeraie, a 300,000-square-foot mixed-use project that will feature a Ritz-Carlton Hotel and Ian Schrager’s Edition Hotel, has received a commitment from Hermès.

“Yes, we are going to the Palmeraie,” said Robert Chavez, president and chief executive officer of Hermès USA. “We love the Ritz-Carlton association and the exclusivity of the project.”

“We’re just about to close on Yves Saint Laurent, John Varvatos and Santa Maria Novella,” said Hanna Struever, a principal of Retail Portfolio Solutions, which is leasing the Palmeraie. “There will be no Gaps and no Banana Republics.”

A Yves Saint Laurent spokeswoman said she could not comment about leases. Santa Maria Novella could not be reached for comment.

The Palmeraie’s retail component, which is slated to debut in October 2010, is competing with the Fashion Square Mall and the Biltmore Fashion Park, for luxury customers.

Struever said that most of the brands the Palmeraie is pursuing don’t have stores at Fashion Square. According to sources, the Palmeraie is targeting Roberto Cavalli, Escada, Catherine Malandrino, Tory Burch and Chrome Hearts.

Scottsdale was discovered by upscale brands in the early Nineties when developers predicted it would become a luxury mecca. Some retailers found that the market was too young and exited. Struever pointed out that Scottsdale is in the fifth-largest metropolitan statistical area in the U.S. and has one of the wealthiest populations. Year-round tourism also makes it an attractive market, she said.

But Stephen Stephanous, a principal of Madison Retail Group, who works with specialty tenants, said he’s not sure there are enough luxury consumers to support all the properties.

“One Scottsdale, which is to be built in north Phoenix, is also branding itself as luxury,” he said. “For the last 10 years, Fashion Square seems to have rolled with the punches very effectively. It has a broad-based appeal that includes luxury shoppers. Barneys New York’s arrival should provide opportunities for better space for high-end and bridge players.”

The Palmeraie took Bal Harbour Shops in Bal Harbour, Fla., as its model. Its setting will be an “unbelievably lush palm grove surrounded by beautiful mountains,” Struever said. “The architecture is classic, clean and timeless.”

The average age of a customer is 34 “and she’s very chic and feminine,” Struever said.