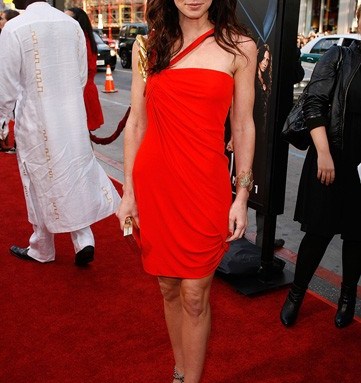 Fans lined Hollywood Boulevard in front of Grauman’s Chinese Theatre, waiting hours to glimpse stars at the premiere of “X-Men Origins: Wolverine,” the first blockbuster of the summer movie season.

Celebrities such as Fergie, wearing Vena Cava, didn’t disappoint them or the photographers and cameramen who crowded the red carpet to transmit images around the world.

That scene was replayed at Cannes last month, as throngs waited behind barricades at the Palais de Festivals to watch stars like Angelina Jolie, in Atelier Versace, alight the famous steps.

Although $1,120-a-pound caviar and pricey bottles of Veuve Clicquot are less ubiquitous on the scaled-down premiere circuit this season, the red carpet endures as a key branding and marketing tool for designers. It is a relatively low-cost but potentially powerful vehicle for fashion houses to promote their offerings, as well as an essential element for producers to draw the attention of the movie-going public to a season featuring such megafilms as “Star Trek,” “Terminator: Salvation” and “Transformers: Revenge of the Fallen.”

The red carpet has always been important,” said Sidney Toledano, president and chief executive officer of Christian Dior. “You need the Hollywood [axis], and you need Cannes. It’s very important for the fashion world to be close to actresses.”

Red carpets cost an average of $50,000 to stage in Los Angeles, including the cost of the theater, security, ticketing staff and transportation, and expenditures can double for the largest events. Luckily for designers, studios shoulder those costs, which are a relative pittance of their overall marketing expenses in the tens of millions.

“The trend of designers wanting to dress celebrities is a booming business,” said James Grant, ceo of Starworks, an agency that packages celebrity ad campaigns and editorial placement. “Beauty sells, and when the economy is down in the dumps, people want to be inspired.”

Marchesa designer Georgina Chapman pointed out, “Because they’re custom-made dresses, you don’t get an automatic retail impact, but it’s an amazing tool. When customers who are working women, aspirational women, see a dress on an actress, it’s different from seeing something in a show. A customer can see how it’s been transformed from the runway to the red carpet.”

There are few, if any, tableaus that pack the publicity punch of a starlet walking the gauntlet in a designer creation. The importance of those strolls is intensified as designers and retailers seek every advantage to entice shoppers who are cutting back because of the troubled economic climate.

“A red carpet is a world stage and an important way to see our designs come to life,” said Domenico Dolce and Stefano Gabbana, who, like Toledano, hosted their own fetes in Cannes, a surefire way to ensure that celebrities show up in their wares.

Added Esteban Cortazar, chief designer of Emanuel Ungaro, who dressed actress Lynn Collins for her “X-Men Origins” premiere, “It’s a great way to reinvent the collection by styling it differently according to different actresses’ personalities and looks.”

To that end, many designers have staffers dedicated to placing their clothes on celebrities year-round. Between Hollywood blockbusters and film festivals, summer is almost as busy as awards season. Designers themselves often travel to see to it that their dresses get worn on red carpets.

“Hollywood is an important market for us, and we follow the cinema all year,” said Alberta Ferretti, who travels to Los Angeles three to four times a year for events and celebrity fittings, and also makes stops in Cannes.

Those behind the scenes on movie production are also keenly aware of the link between fashion and film.

“A red-carpet premiere is one more way to get into peoples’ consciousness,” said Lauren Schuler Donner, producer of “X-Men Origins.” When they see a photo of Halle Berry, they read to see where she was, and it gets them thinking about the movie. Mission accomplished. Because of the economy, we chose not to have an after party, but our red carpet was covered, and I think it was just as effective.”

Although a studio executive, who asked not to be identified, said, “The red carpet will never go away,” Schuler Donner is less sanguine.

“Normally we bring all the stars to Europe for international premieres, and we didn’t do that this year because of expenses,” she said. “Now that we’ve cut the party, who knows? The red carpet has worked since time immemorial so there’s no reason to think it will disappear, but there is a lot of uncertainty in this economy.”

Despite all of the anxiety, the movie industry is on track to gross record ticket sales this summer. “X-Men Origins” grossed $87 million on its opening weekend in the U.S., and “Star Trek” grossed $79.2 million. The year-to-date box office is already almost $3.24 billion, 16.4 percent more than last year, according to Media By Numbers.

Still to come this summer season is fantasy fare such as “Land of the Lost,” “Harry Potter & The Half-Blood Prince” and comedies like “Bruno” and “Funny People,” among others.

So the opportunities will be plentiful for designers looking to inspire women to open their wallets.

“A lot of the clothes we do for the runway are perfect for the red carpet, which is important from a p.r. perspective….Ultimately, we want to design clothes that real women want to buy,” said BCBG’s Max Azria.