The Return of Miguel Adrover

The designer is back on the scene for fall — and he’s still doing it his own way. 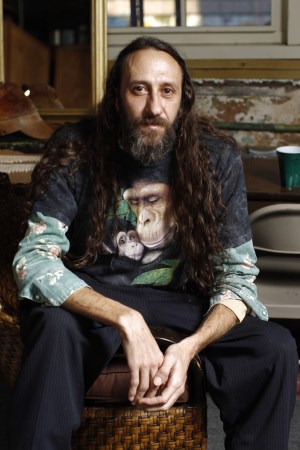 Miguel Adrover is sitting in a raw backstage room at the Teatro Latea on New York’s Lower East Side on a mild day in early February. He knows the venue well: He presented his first two collections there over a decade ago, which, almost overnight, made him a fashion wunderkind and curiosity, all rolled into one. It’s also the space he chose for his New York runway return this Saturday, after shuttering his company in 2004, leaving the city for his native Majorca and then resurfacing in 2007 as creative director at German eco-brand Hessnatur, a post he still holds today.

Much has changed for Adrover, 46, in the past few years, but he hasn’t lost the uncensored spirit from his early days when he pushed boundaries with collections that were full of political and social commentary, not to mention making clothes out of a reworked Louis Vuitton handbag and Quentin Crisp’s old mattress, or the time he outraged even the most jaded fashion types when a live sheep — visibly scared of the spotlight — fell off the runway during one of his outré shows.

Asked why he wanted to come back now, Adrover shrugs. “I left in 2005, and I have been collecting so much since,” he says. “I got the chance to travel to so many places in the world. I got so much inspiration, I just could not hold it in anymore. I also think there’s a big lack of creativity in the industry. It got too focused on the business side. There is an emptiness out there. I have a lot to say.”

The “business side” is something the Spaniard knows much about. At the height of his media interest in the spring of 2000, Adrover signed a partnership deal with the much-hyped, ill-fated Pegasus Apparel Group, which dissolved shortly after Sept. 11. He was left to his own devices and struggling to find financing, which eventually resulted in him throwing in the towel. Joining Hessnatur, which is the main sponsor of his fall show and collection, allowed him to slowly prepare for this return.

“I take this opportunity to express myself very seriously,” Adrover says. “When I was young, I took off to London. I remember the late age of punk, the early age of the New Romantics. I remember Vivienne Westwood, I remember Body Map, and all the social moments that were related to clothes…bands like Bow Wow Wow, or Leigh Bowery. To be avant-garde and modern at that time was to take a risk, almost on your life. Today, it feels like it’s the other way around. Lady Gaga is dressed by a famous designer. The bands have stylists. For a lot of people I know, it’s only corporate, and it’s all based on sales. You can get perfume from Mariah Carey, you can buy clothes from Madonna. That is not exciting for me anymore.”

It’s a notion Adrover hopes to shun with his new collection. For fall, he worked from an inspiration that counters the design process of most other designers. “I thought, ‘How can I lose touch with what is going on? How I can not be affected? How can I see clothes in a perspective that I don’t even know the meaning of or what kind of status they represent?’ I have been thinking about a plane flying over the Amazon, carrying luggage that drops down. And I think about the [indigenous people] of the Amazon finding the luggage but not knowing how to use it. I imagine how they put it together.” Similarly, he envisioned “someone from another world” visiting earth for the first time, trying to make sense of the fashion he encounters.

Adrover’s 52-look collection for fall was hand-sewn by four fashion students without patterns or machines. All materials came from what Adrover had stored in his Majorca home, including fabrics and extra threads he kept from his work at Hessnatur, as well as Rajasthan carpets, Ralph Lauren sheets (which probably won’t please Lauren) and aprons that belonged to his late grandmother. “One day, I opened my closet, looked at all my clothes and I almost started crying,” he recalls. “After seeing my friends in Cuba and Egypt with just three fabrics on their wall, and they are very happy, I realized you don’t need more than that. But when I looked at my closet and saw all the clothes, it actually made me feel sad. It got to a point when I said, ‘I refuse to buy fabrics, I refuse to use sewing machines and I refuse to do patterns. I need to figure out a way how I can put it together and create something new.”

His view of fashion may well counter the very essence of what this industry is about, but Adrover doesn’t seem to care. “Luxury goods, luxury no good anymore,” he says. “I believe the fashion industry has the power of helping a lot of people. It’s not about selling anything or producing anything — it’s about being responsible.”

And, he stresses, it’s about being less political. He references his past collections that explored Islamic culture and the treatment of women — one of which came out, in quite possibly the worst timing, two days before the Sept. 11 attacks. “Before, I tried to represent society and I used to be very political in ways that people got the wrong point of view of me, that I was pro-Islamic or pro-Arab,” he says. “I was brought up Christian, but I dropped it many years ago. I believe in good, I don’t believe in God. I am not attached to any group or movement, radical or religious.”

There is something else he’s discovered along the way. “I need,” he deadpans, “to drug the sheep.”