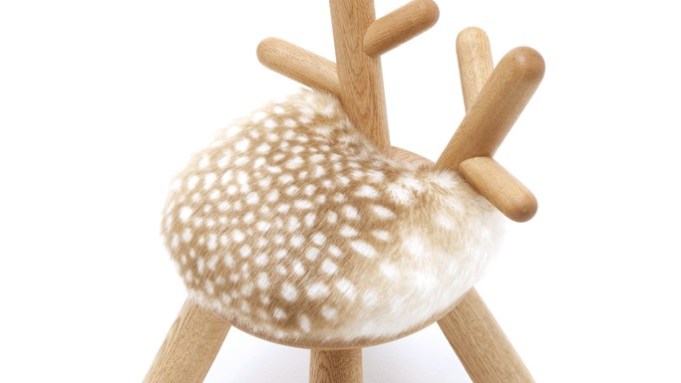 MILAN — There was tension in the air at Milan’s annual Salone Internazionale del Mobile — not among the 300,000 visitors or 2,500 exhibitors, but in the designs themselves. Furniture at Milan’s vast fairgrounds —and at the polished showrooms downtown — ranged from the rough-edged and worn-in to the ultrahigh-tech, while designers aimed to marry traditional materials and techniques with modern shapes or technology.

At the Austrian Design pavilion in downtown Brera, young architects and designers had both the past and the present in mind. Thomas Traxler of Mischer Traxler Studio in Vienna created a basket-making machine that responded directly to the number of people gathered around it. The more people who stood by it and watched, the faster the machine wove the baskets from thin strips of veneer, creating one centimeter every 15 minutes.

With no one around, the machine would simply stop. “We’re trying to put a human dimension back into mechanical production,” said Traxler. “Yes, we’re making a statement, but we hope it’ll be a salable statement,” he added. On display beside Traxler’s machine was Lichterloh’s Seven Day Chest designed by Philipp-Markus Pernhaupt. Made from oak and lacquered glass, it has separate, colored-coded drawers for each day of the week and is inspired by the traditional, 19th century chests once used throughout Austria and France.

At the fairgrounds, more than 700 young designers showcased their latest creations at the Salone Satellite, the smallest and most intimate section of the fair. Japanese designer and woodworker Takeshi Sawada filled his booth with small oak and walnut stools, or Bambi chairs, covered in faux deerskin, with tiny antlers at the back. “I like animals, and in Japan the deer is a sacred creature and a messenger of God,” he said. “The act of sitting in this chair symbolizes not that we resist nature, but that we live with nature.”

Another designer fascinated with tradition and the natural world was Marcantonio Raimondi Malerba, whose furniture was made from a fusion of found and new materials. His Grandpa Totem is a tall chest made from a stack of antique wooden drawers, while one of his sofas is made from a beat-up wooden frame with new fabric cushions lashed to it. Tables, chairs and chests all featured a similar combination of old wood — sometimes thick, twisted tree branches — and new fabric or fur surfaces.

“I love the idea of one-off pieces and natural materials,” said Raimondi Malerba. And I think that materials or pieces with history — like the cabinets in the Grandpa Totem — impart a sense of security. I like to think I create new objects with materials that people can recognize and that feel familiar.”

German designer Ellen Heilmann also opted for familiarity and tradition: Heilmann’s set of high and low wooden stools, known as The Royal Family, have detachable and interchangeable fabric cushions of varying heights. Take the cushions off, and the stools become tables. “Every stool is visually similar, but on the other hand, each is individual, like family members usually are,” she said. “I also happen to like the 1950s, which is where the stools’ designs came from.”

In the main part of the fair, Fendi worked a host of natural and animal-inspired materials into its opulent furniture collection manufactured by Club House Italia. The Fendi furniture features eucalyptus wood, horn handles on cabinets, printed hides — shagreen, alligator and crocodile — for linings and surfaces and orylag fur and arctic fox for finishes, plaids and cushions. The Bernini dining table top is made from eucalyptus veneer while the sharp, angular Cerva wooden dining chairs are covered in leather.

Every two years, the world’s kitchen and bathroom makers showcase their latest wares, and among the high-tech appliances to make their debut was the Italian firm Franke’s futuristic, multitasking oven, which home cooks can operate via smartphone. The Crystal myMenu model allows anyone to plan an entire dinner on the phone, and then transmit the information to the oven. The myMenu program offers recipes, counts calories, suggests portion sizes for guests and even makes suggestions about how to cook leftover vegetables hanging around in the fridge. When the meal is ready, it sends a text to the cook — who’s presumably knocking back cocktails and chatting with guests — to announce that dinner is served. The new oven will hit retailers’ shelves in 2013.