The Scenes Behind the Scenes: Part Two

A megaretailer, a major casting agent and a p.r. exec weigh in on the trials and tribulations of prepping for the shows.

By Marc Karimzadeh and Jessica Iredale on September 6, 2012
View Slideshow 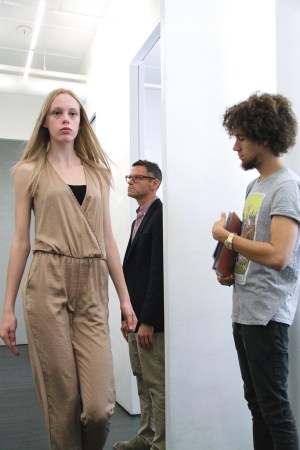 In the second part of WWD’s series, a megaretailer, a major casting agent and a p.r. exec weigh in on the trials and tribulations of prepping for the shows. Sleep deprivation, lots of black and a sense of humor are par for the course.

Do you have a fashion week survival guide?
“Incredible patience. I try to be unflappable, because unbelievable things can happen during the course of the week. It takes a toll on you. I spend a lot of sleepless nights — basically, I just run on adrenaline and am not eating. I have to be at so many different places at different times.”

RELATED STORY: The Scenes Behind the Scenes, Part One >>

When do you start prepping?
“Mid-August. That’s when I start planning with some meetings. After each season, it’s almost a given that 70 percent of your cast will come back, maybe even 80 percent, so it’s really about looking for new girls.”

What are you looking forward to the most?
“It being over.”

What are you dreading?
“Conflicts I have going on right now, such as when a show somehow pops up on top of your show that didn’t exist before. Even if it’s not a great show, they may have a powerful stylist and that’s tough to take sometimes.”

What will you be wearing this week?
“I don’t plan a wardrobe, but I am not a jeans-and-T-shirt person. I always dress on show dates. I always wear Tom Ford suits.”

NEXT: The Public Relations Strategist >>

Lynn Tesoro, cofounder and partner of HL Group, is handling 15 shows and presentations this season — including Oscar de la Renta, Marchesa and Zac Posen — and five events, including the Style Awards and Angelo Galasso’s store opening at The Plaza.

What are three things you need to survive fashion week?
“A sense of humor, good partners and focus.”

When do you start prepping?
“Conversations with our clients almost never stop. We meet after the show and discuss what went well and what didn’t, and what is needed next season to improve the process. The teams start to actually work on the planning about three months prior to the shows, with Paris and Milan being worked on at the same time.”

What are you dreading?
“Bad weather. It can derail a perfectly planned show.”

What will you wear to the shows?
“I keep things simple with a mix of Ralph Lauren made-to-measure, DVF and Dries Van Noten.”

As senior vice president of the fashion office and store presentation at Bergdorf Goodman, Linda Fargo’s responsibilities include overseeing the visual department, which includes the store’s interior and exterior, i.e. the windows — roughly all 28 of them.

When do you start prepping for fashion week?
“It’s year-round because it’s twice a year and it’s not just me that has to be ready. It’s having the store ready. Everyone who’s anyone is going to come through. So, what are the windows going to look like? It’s the beginning of the season, which is incredibly important for sales. Fall runway is hitting. Everyone is back from vacation, and then you’ve got all the press and stores from around the world convening in New York. So we really want to look our best. The 111th anniversary was an incredible catalyst for us to get a lot of projects going. We’ve probably undertaken more capital improvements in the store over the summer than we’ve historically ever done.”

How do you organize your schedule?
“My assistant, Jennifer, is air traffic control for pretty much the entire company. All the ticket requests go through her. We can’t have everyone from everyone’s office calling Oscar de la Renta and saying, ‘We need our ticket.’ We have to work out transportation, like, ‘Oh, my god. Five o’clock on the West Side Highway — car!’ And we carpool. Everyone would love to have their own car, but that’s not life anymore.”

You’re known for being very well-dressed. Do you plan everything out?
“I don’t do that. If everything is preset I’m bored with it before I’ve even worn it. I need that level of spontaneity — if I’m feeling I need color that day or I want just black to kind of fade in. Or if I’m feeling fat, then I definitely need black. I generally overpack. I’m kind of like a Girl Scout — I want to be ready for anything. I’ve been on trips before where I get invited to an amazing black-tie event. If I didn’t have a proper cocktail dress, I’d be in trouble. You need a little lingerie, because, who knows?”

Do you have a fashion week survival guide?
“I take vitamins every day — they’re my insurance policy. I’d like to say sleep enough, but that’s just not realistic. Mixing business and pleasure is still kind of a formula for making this all good. I like the socializing piece of it. A lot of what we do is relationships.”

What show are you most looking forward to?
“If I had to pick one, Joseph Altuzarra. I thought his fall show was so special.”