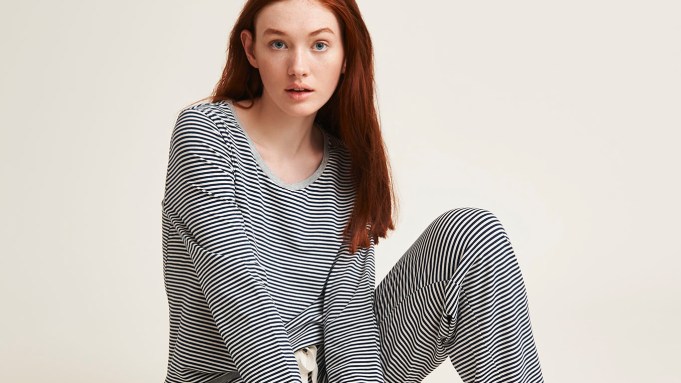 Natural Skin, which had a successful soft launch at retail in the fall, is priced 35 percent to 40 percent below Skin, said Ken Sitomer, chief executive officer, who joined as Beischel’s business partner in 2011. Like Skin, Natural Skin comprises sleepwear, loungewear, robes, slippers, daywear and organic cotton bras and panties, along with basic replenishments.

Skin swimwear, whose distribution has been kept relatively tight, is sold at such retailers as Net-a-porter, Everything But Water, Neiman Marcus and Matches.com.

According to Beischel, the swimwear has the same concept as Skin’s other luxe products. as far as comfort, style and being multifunctional. “The fabric had to be super soft, and I needed to wear it as a body suit, or as a bra, or a workout top,” she said. Swimwear retails from $160 for the basic maillot to $300 for a two-piece suit with built-up architecture for additional support and special fabric with a sheen. The line features bikinis, one-piece swimsuits, separates and cover-ups.

“We don’t really do prints. I did an animal print for swim, which we’re selling for spring,” Beischel said. She also did an ombré print in robes and pants in its silk loungewear group. “Our aesthetic and our taste level is sophisticated,” she said. At department and major specialty stores, Skin hangs with such resources as Natori, Hanro, La Perla, Agent Provocateur and Wolford.

“We’re definitely a lifestyle brand. We’re not just pajamas and robes. I’ve always approached the whole concept of the brand by looking broader and trying to bring newness and freshness into that sector. Because a robe looks like a robe looks like a robe. I’ve always tried to look at it from a clothing point of view,” Beischel said. “I’ve tried to bring details and silhouettes in that reflect fashion. That’s how we started to look different and have a point of view that’s different. It was always about wearing it everywhere. A nightgown might be worn to a black-tie dinner,” she explained.

Beischel said the company’s number-one value is comfort. “Everything that touches your skin has to be super soft and comfortable. I specialize in cotton. When I started the brand, I personally could not find things in the market that were not itchy and scratchy, even the labels inside had scratchy thread and laces were stiff and not soft. That’s when I created the idea of Skin, because skin is your largest organ and covers your entire body and it’s so thin and delicate, yet so strong,” she said. She uses high, thread-count cotton that lasts forever and can be thrown in the dryer. Skin is manufactured in Peru.

Natural Skin is manufactured in Bangladesh, China and Turkey and is designed to be more youthful and spirited.

Discussing the soft fall introduction, Beischel said, “The launch went very well. We had 50 to 90 percent sell-throughs on items at Bloomingdale’s.” Next month, Printemps in Paris will open a pop-up shop for Natural Skin for a month. After that it will be merchandised in the department.

“Skin is very zen, spa, sophisticated and a comforting palette. This gives us an opportunity to be more energetic and youthful,” Beischel said. There are stripes, more color and novelty trim in Natural Skin. “The strategy is to keep them separate and growing,” said Beischel, who doesn’t have swimwear in Natural Skin yet.

Beischel brings a retailer’s mentality to her role. Prior to launching Skin, Beischel was a buyer for Ultimo in Chicago and ran the three Jil Sander stores, where she did the buying. She got her start in the executive training program at Neiman Marcus, rising to assistant buyer.

While Skin’s model has been wholesale driven, the brand launched an e-commerce about two years ago, which quadrupled its business in the last year.

The partners have been thinking about opening a store, but it has to be the right location. They have been approached by potential licensees, and are working with a licensing company to expand the product range. According to Sitomer, potential categories would be beauty, including a fragrance and natural body products, men’s wear, footwear, accessories and homeware. Bras could be another opportunity.

Beischel noted that 25 percent of Skin’s sales are replenishment basics. Stores such as Selfridge’s and Neiman Marcus get reorders every week. “Those are the foundation pieces of the brand, and have been for the past 15 years,” Beischel said.