The Ultimate Slimane on Avenue Montaigne

The world’s largest assembly of Saint Laurent merchandise has landed in an airy, minimalist boutique composed mainly of marble, metal and mirrors. 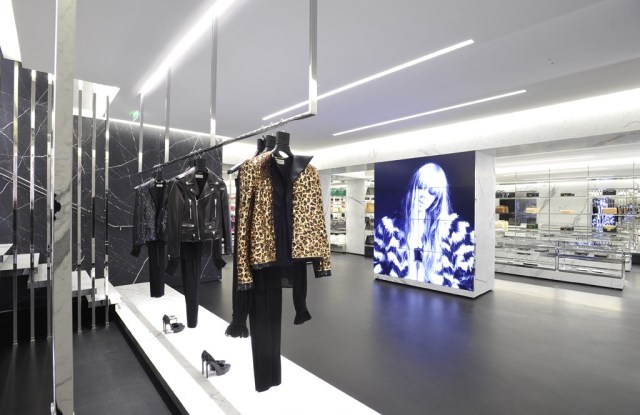 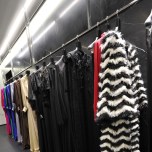 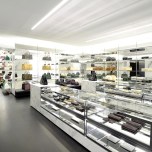 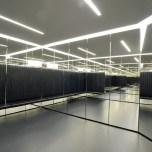 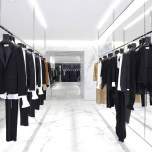 The 9,700-square-foot flagship, which opens to the public Thursday, is the boldest expression yet of the French brand’s expansion and rejuvenation drive.

“The store concept is an essential ingredient of the reformation by Mr. Slimane and the new strategic direction of the house,” Paul Deneve, president and chief executive officer of Yves Saint Laurent, told WWD.

Besides boutique openings and refurbishments, Deneve said there also would be “significant investments” in communications, product development, production and the supply chain — all to help vault Saint Laurent into fashion’s major leagues.

The two-story Avenue Montaigne boutique — which features a sprawling VIP salon and fitting room clad in diagonally quilted black leather — is certainly a major statement for the mythic brand.

“Being located in one of the most prestigious districts for luxury shopping, it’s an important move for Yves Saint Laurent as a couture house that is deeply rooted in Paris,” Deneve said, also heralding the unit as “a significant step” in the evolution of the brand under Slimane.

To be sure, the store announces how quickly the designer, who arrived at the creative helm of YSL in February 2012, has overhauled the product universe.

Cabas Chyc handbags and Tribute shoes — key engines for the label under its previous designer, Stefano Pilati — are nowhere in sight, replaced by the new ladylike Sac du Jour and a platform pump named Janis, among items that helped YSL report a 16.9 percent revenue gain in the first quarter, besting all its luxury peers at French parent Kering (the former PPR).

Retailers and consumers have been “overwhelmingly supportive of Mr. Slimane’s vision for the brand,” according to Deneve, trumpeting “very strong growth in men’s and women’s ready-to-wear” and traction with Duffle and Betty handbags.

Slimane called the monochromatic boutique’s design “a modernist transposition of the techniques and materials of French Art Deco.”

Rooms are generously proportioned — offering uninterrupted vistas from the front to the back of the store — and uncluttered, exalting the streaked white or black statuary marble cloaking the walls.

Striking features include racks suspended from the ceiling, putting the bosom of clothes at eye level. When hung in the middle of the room, as opposed to the perimeter, they seem suspended in midair.

Shoppers alight on a spacious foyer with a powdery black concrete floor, flanked by a video wall and a staircase caged in gleaming nickel-plated brass.

The main floor unfurls as a series of accessories salons, appointed with sleek leather banquettes and gleaming glass-and-mirror cases — mounted on low-slung podiums for leather goods, or embedded in walls for eyewear, fine jewelry and other small accessories. Handbags and shoes are lined up with mathematical precision atop gleaming mirrored shelves, or slabs of marble with inset lighting.

The tour culminates with a vast room showcasing eveningwear, including the jacket with Klimt-esque metal embroideries that Gwen Stefani wore on the cover of the January issue of American Vogue, priced at 47,000 euros, or $62,110 at current exchange.

The upper level — boasting a white marble floor and concrete walls embedded with the board patterns that formed them —showcases women’s and men’s rtw in a series of rooms, plus a compact salon for men’s leather goods and shoes.

Conceived from floor to ceiling by Slimane, the boutique references the French Art Deco and Union des Artistes Modernes (French Union of Modern Artists) movements, with decoration derived from the chosen materials.

Fitting rooms — a fixation of Slimane’s when he was the creative director of Dior Homme from 2000 to 2007 — are spacious and outfitted with a series of mirrors in a semicircular formation.

The new boutique design was first unveiled in Shanghai last October, with Berlin among nine Saint Laurent units added in the first quarter, bringing the total number of directly operated stores to 98 as of March 31.

Deneve noted that the new retail concept will be applied gradually to all Saint Laurent stores globally, and “we’re expecting to see solid progress over the next 18 months.” Other locations scheduled for refurbishment this year include Sloane Street in London and Alexandra House in Hong Kong.

Meanwhile, Deneve vowed to continue enhancing “the quality and craftsmanship of each of our categories,” while stopping short of a push into high fashion, something its French peers Chanel and Dior are famous for.

“There are no immediate plans to develop a separate haute couture collection,” he said.

As reported, Kering cited an “acceleration of the brand reinvention” under Slimane when the group reported first-quarter results last month. YSL revenues reached 127 million euros, or $167.7 million at average exchange.

Growth in the quarter was highest in “other countries,” up 29 percent, with Asia-Pacific and Japan each gaining 26 percent and Western Europe 23 percent. Sales in North America were flat, Kering reported.

Given YSL’s ambitions to rival the likes of Chanel and Dior in size and cachet, it has set an interim goal of reaching one billion euros in sales before the end of this decade, according to industry sources.

The company declined to discuss first-year sales projections for the new Avenue Montaigne store, but market sources said it would likely generate revenues of 15 million euros, or $19.8 million at average exchange.

In Paris, Saint Laurent also operates two freestanding boutiques on the Rue du Faubourg Saint-Honoré, one on Rue de Grenelle and one on Place Saint-Sulpice (currently closed for refurbishment), along with men’s and women’s shops-in-shop at Galeries Lafayette and Printemps.