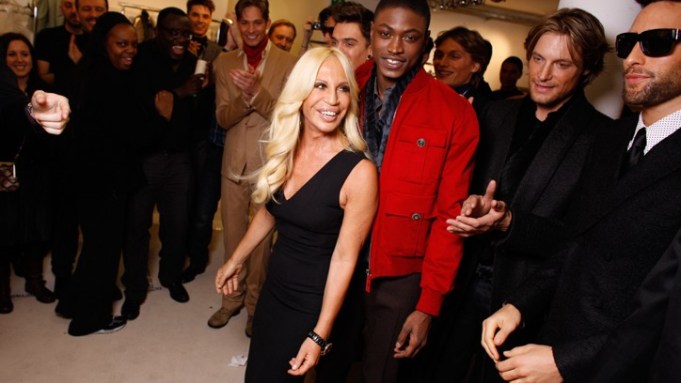 When Donatella Versace laid out the foundations upon which her design collaboration with Alexandre Plokhov would be built, she made one point crystal clear. “‘We’re not dressing a librarian or a cute geeky kid, but a man on the same level as the Versace woman,’ she told me,” says Plokhov, who has five seasons with the Medusa-head house under his belt.

A rocker wasn’t a target either, as Versace has moved her man offstage and beyond the rock-star image that characterized the collections for many years. “The Versace man was always very rock, but today even musicians have a more formal look—they wear ties, for example,” notes Versace.

Says Plokhov, “We’re going in a more modern and streamlined direction with a precise focus.”

Gone is the look-at-me attitude of past seasons heavy on flashy colors, metallics and tough-chic studded leathers. The new Versace man, who seeks substance for his bucks, is here to sweep a girl off her feet in precise tailoring, subtle details and ultraluxuries such as a chinchilla sweater.

Of course, at Versace, none of this comes at the expense of sex appeal.

“Everything—the shoulders, the waist, the hips—have to be in focus to make a man look sexy and trim when he’s dressed,” says Versace.

And that focus comes at the hands of Plokhov, who came to Versace from the now-defunct but highly acclaimed men’s label Cloak. During his six-year run with New York-based Cloak— which was temporarily a partnership with Robert Geller, whose profile is now rising with an eponymous  label— Plokhov was transformed from an anonymous patternmaker at Marc Jacobs to a heralded winner of the CFDA’s 2005 Swarovski’s Perry Ellis Award for Menswear. The following year he was a finalist for the CFDA’s Menswear Designer of the Year.

Regardless of the limelight, Plokhov remained a remarkably down-to-earth designer, who appeared more enamored with the true craft of tailoring, and the precise turn of a seam or make of a button, than the attentions of fashion’s power brokers.

Cloak’s aesthetic was rigidly cutting-edge, with moody palettes, ultraslim fits and a military precision to its cuts and details, which resounded with the disciplined style of a Hedi Slimane or a Helmut Lang, but with a downtown New York slant. Despite a steady stream of accolades, Cloak shuttered its doors in 2006 because of a lack of funds.

While the combination of the low-key, soft-spoken Plokhov and the flamboyant Versace initially raised puzzled reactions, the house’s men’s outing for fall—a well controlled channeling of Old World class and Old Hollywood suaveness—illustrates the point that opposites can attract. “I watch Alexandre during fi ttings and I’m impressed by his tailoring competence. He frets over half-a-millimeter on a shoulder and he’s also very good with fabrics,” says Versace.

Though the Russian-born Plokhov was initially overwhelmed by the moon-blonde designer’s high-wattage lifestyle, one that includes bodyguards, chauffeured cars, prized artwork and dazzling jewelry, he now feels totally at ease around Donatella, whom he describes as a “strong woman with distinct ideas and in total control of the brand.”

The two certainly complement one another—Versace, well-versed with color, prints, skin and Baroque fl ourishes on one side, and Plokhov, with roots in strong tailoring and a preference for the dark and austere on the other.

But regardless of the differences, the two have found, or blazed, common ground. Versace’s effect on Plokhov is plain to see in his newfound comfort with color and his seemingly lighter spirit. For example, last season he said the spring collection was inspired by “walking down the promenade, wind in your hair.”

The house’s new credo of more craftsmanship and less showmanship found its way into a fall collection influenced by the virile characters in Raymond Chandler’s detective story, “Pick Up on Noon Street,” and the heroic Hollywood stars of the Twenties and Thirties.

The darker looks, including a robelike cashmere coat and double-breasted suits with wide lapels, evoke film noir heroes, while trim leather jackets with fur scarves and snug cable knits are well suited for a weekend at a country manor. There are fine wools and cashmeres in a soothing palette of winter white, pale tones, deep blues and shots of red; and exclusive fabrics such as a rainproof cashmere and a cashmere and bamboo blend.

“What I love about Italy is that you have every fabric supplier handy and they’re willing to do anything,” says Plokhov. “It’s certainly not like that in New York.”

Versace says she initially avoided discussing prints with Plokhov, noting with a smile that he would have “fainted,” but apparently a modern print is in the works for the upcoming spring collection.

“The challenge is finding a new way to put prints back into Versace’s vocabulary that breaks away from the iconic Baroque motif,” says Plokhov.

Surely the two will strike the right balance.

“What I like about working with him is that we have a completely different perspective on men’s wear, which is great because I’m not interested in someone with my same ideas,” contends Versace, surrounded by marble, burgundy velvets and wood boiserie in her late brother’s flat in the Via Gesù headquarters. Versace isn’t drawn to Yes-men. “We’re honest and forthcoming with one another and we find a compromise that pleases both,” she says.

“I like to give a lot of space to people who work for me because ours is a team effort,” says Versace, adding with a laugh, “but I won’t publicize Alexandre too much— otherwise someone will steal him.”