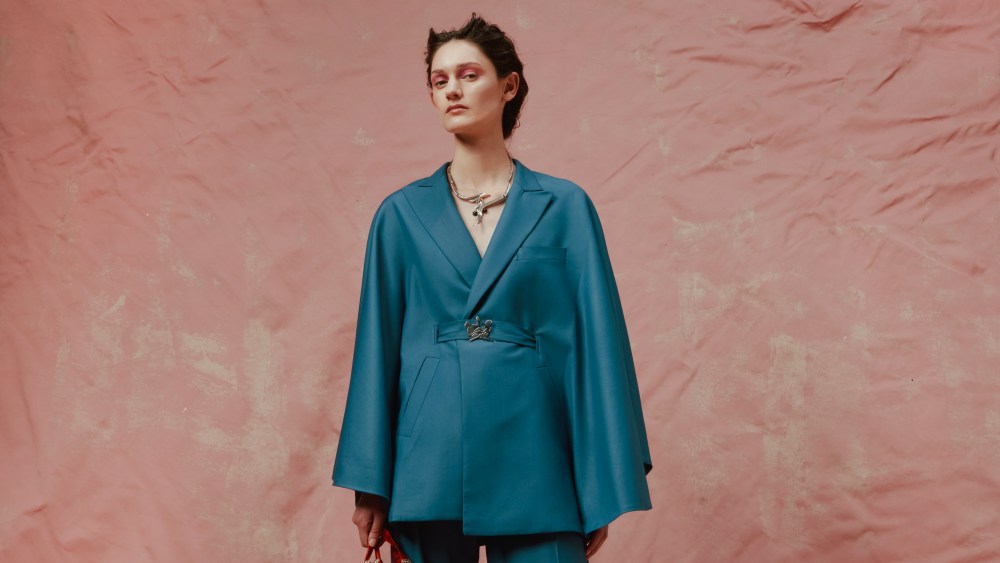 LVMH Prize winner Thebe Magugu unveiled the look book for his “Discard Theory” collection just ahead of his shows on Friday at London’s Victoria and Albert Museum.

The 25-piece collection, previewed during Paris Fashion Week, was inspired by his trips to South Africa’s secondhand markets. He gave a dose of luxe to many of those looks, and worked playfully, too, mixing up luxury textiles.

He released a documentary on Sept. 29 following his experience in the Dunuza market.

The 15-minute film shows Magugu rummaging through the discarded clothes dumped by the U.S. and Europe, and exported to developing countries.

“We started isolating things that I thought were really, actually incredible,” Magugu said. These old items were the starting point of the collection.

“It’s this idea of inverting that trickle-down theory where things start with the bourgeoisie and make their way down to those bins,” he continued. “This collection tries to do the opposite, and move things that were from those bins up into that space.”

Magugu bought around 40 pieces, some of them knockoffs and others original designer pieces, to use as inspiration.

The collection’s first look was a photo of a denim outfit screen-printed onto a delicate pink dress. “I love the idea of this really regal shape, but then almost like the sleazy look on on top,” Magugu said. “I really liked the juxtaposition in here.”

Other playful patterns included fish and chips, but with koi and sweet potatoes; blurred blanket prints, and florals. Magugu also demonstrated his prowess with pleats and proportions. Wide sleeves with cape-like proportions gave his suits a show-stopping effect.

Magugu said he hopes the documentary will help consumers reflect on the environmental and social impact of where their discarded clothing ends up, how it affects local economies and hurts young designers.

“I think it’s most unforgiving on emerging brands and on young designers,” he said. “Things are so cheap, that it sort of warps people’s perceptions. Emerging designers are always having to justify [themselves], and it’s becoming increasingly difficult.”

Magugu also said he has shifted some of his production from South Africa to Madagascar as his home country, like many others around the world, is suffering from an energy crisis. He recently visited his factories in Madagascar to verify working conditions as part of his mission as an ethical brand.

“This is my first catwalk presentation in Europe, and it has been really incredible working with the V&A team who have long time supporters in purchasing the collection for their permanent archives,” said Magugu backstage after the London show.

As part of his collaboration with the V&A, one of his woven check bags was on display in the majestic Raphael Cartoons room. “I like that tension and contrast,” said Magugu, adding that the bag “shouldn’t really be there, but that’s what makes it interesting. It’s about finding beauty in the mundane.”