Collection of printed oversize scarves and bold statement jewelry was inspired by the Sixties and Seventies European jet-set. 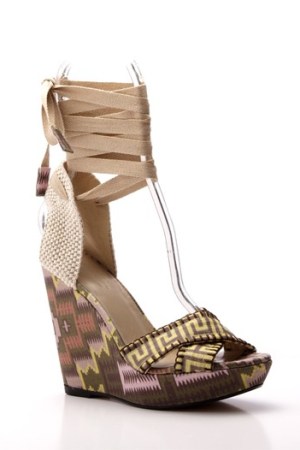 “We’ve got this whole vibe of a creative factory,” said Stefani Greenfield, who has teamed with Desiree Gruber, president of Full Picture and co-executive producer of “Project Runway,” to launch the Theodora & Callum collection during New York Fashion Week.

Now they’ve got Stuart Weitzman on the program, with a licensing deal. From his factory in Spain, Weitzman is creating platform espadrilles and handbags to complement Theodora & Callum’s colorful, printed oversize scarves and bold statement jewelry inspired by the Sixties and Seventies European jet-set.

“Stuart and I can get into each other’s heads,” said Greenfield, the president of My Next Act, a brand consulting company. “He can articulate my thoughts in the product and he is willing to explore an idea. He works with me directly.” Earlier, they collaborated at Scoop, which Greenfield co-founded but left about three years ago.

The platform espadrilles are 3 to 4 inches in height, have crisscross fronts, whipstitch detailing, extralong ties and heels are either printed or woven, priced at $395. There are three bag silhouettes: leather trim totes for $335; classic hobos printed with braided handles for $395, and clutches in prints with whipstitch detail for $285.

“We are working on another group of shoes, very limited as well but not as limited to that one attitude,” said Weitzman, who rarely does licensing deals. “Stefani is continuing to create new ideas around accessories.” For fall, Weitzman said there will be 10 styles. “It will still be a very item-driven line, with a real feel for a few, particular kinds of looks.”

It may not be long before Theodora & Callum tackles beauty as well. “We love collaborations. I would love to add a beauty element,” said Greenfield. Shimmers and bronzers would work well with the collection of scarves and bags, she said.

While it appears the pedal is being pushed on product development, Greenfield’s message is that there’s nothing random. “It all tells a story,” she said, with the espadrilles and bags incorporating the print designs from the scarves. “Everything is choreographed. But I don’t know if I would wear all three at the same time. Two works.”

The scarves and jewelry are being bought for the current spring selling season by Bergdorf Goodman, Neiman Marcus, Henri Bendel, Saks Fifth Avenue, Bloomingdale’s, Intermix, Shopbop, Nordstrom and Harrods, among other retailers. The espadrilles and bags will launch at Bergdorf’s, Neiman’s and other specialty stores.

The scarves include tie-alls in linen and viscose for $175; in viscose priced at $135, and in rayon, starting at $48 in a solid. There are also $298 featherweight cashmere scarves. Jewelry includes bib necklaces with turquoise stones or cascades of foreign coins; evil-eye necklaces; leaf-fringed chokers and medallions, all with a Mediterranean feel.

The Theodora & Callum marketing blitz starts Thursday with the debut of a Web site, as well as taxi TV and social networking.