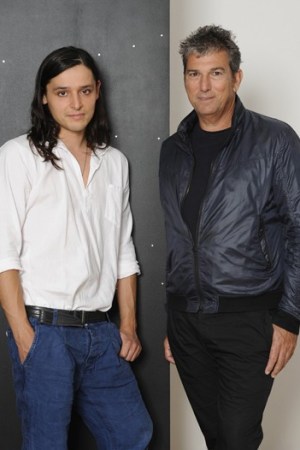 PARIS — Talk about an odd couple.

Olivier Theyskens, the raven-haired designer of lavishly sculpted evening gowns, and Andrew Rosen, the third-generation New York apparel executive who runs the U.S. operations of Theory and Helmut Lang, make a pretty unlikely pairing on paper. But their announcement last week that they will collaborate on a capsule collection for Theory, due to be unveiled in the fall, has set the fashion world abuzz with excitement.

“I think everyone was surprised,” Rosen admitted Tuesday, sitting in the designer’s light-filled Paris studio, located on a narrow street in the Marais district cluttered with Chinese wholesalers.

“Having the opportunity to work with someone like Olivier is a whole new experience for me,” he added with a grin.

Rosen’s satisfaction is legitimate. Theyskens has been without an employer since showing his last collection for Nina Ricci in March 2009, and there has been fevered speculation about his next move ever since.

The Belgian-born designer, 33, gave a glimpse of his new direction last year, when he was briefly in talks with Tory Burch’s ex-husband Christopher Burch about launching a lifestyle brand, but his reemergence in the contemporary segment has still caught many observers off guard.

Though one of the most critically acclaimed designers of his generation, Theyskens has seen commercial success elude him both at Ricci and in his previous position as creative director of Rochas. But on Tuesday he shrugged off his image as a purveyor of overpriced gowns for a couture elite, saying the tag was unwarranted.

“There is always a difference between how people perceive you — and I think image is very important in that regard — and the reality of the market,” he said.

Nina Ricci, he argues, was no more or less expensive than other brands on the French capital’s exclusive Avenue Montaigne. But all that is irrelevant: It turns out that what he is craving right now is accessible fashion.

“I have felt these last few months a growing distance within myself between where I want to go and where I’m coming from,” said Theyskens, who has continued sketching and started researching more accessible textiles.

“Walking around, looking at people and shops, I noticed there has been a real improvement in the manufacturing of products for everybody,” he noted. “It was a direction I really felt I had to go in.”

The designer believes there has always been that streamlined element in his work, so this new project does not represent a complete break with the past.

“It’s more that I see all the possibilities, and that’s very stimulating,” he said. “I like things to be well thought out, to have a line, and I feel comfortable — I feel this is a very logical fit with what I’ve been looking for.”

The next chapter is about to be written. With the ink barely dry on their contract — the deal was sealed less than two weeks ago — Rosen and Theyskens are still working out how they will position the capsule collection in terms of content and pricing.

But they have already agreed on a few key points: Theyskens will work on the collection in New York, and it will be sold under the label Theyskens Theory.

Building brands is something Rosen knows all too well. Over the past few years, he has turned Theory and Helmut Lang into major contemporary labels. He has also been serving as a mentor to many young designers and invested in labels such as Alice + Olivia, Rag & Bone and Gryphon.

Rosen said he agreed to meet Theyskens for lunch several months ago after hearing the designer was looking to branch into the contemporary segment. Afterward, the two strolled over to Theory’s flagship on Gansevoort Street in New York, where they realized they had at least one thing in common: The three little letters at the front of their respective brand names.

“We were just discussing the market and the space in general, you know, how someone like him, with his experience and talent and so on, would maybe do something that was more democratic,” Rosen recalled.

“My vision of Olivier was a very, very, very, very talented designer, creator, but I would not have been one that intensely followed his career or his work. I knew of him, I knew of his reputation, but I’m not a student of fashion in that way,” he explained.

“I was very intrigued because Olivier was very passionate about wanting to do something in this space,” Rosen continued. “I think that he saw the Theory and the Theyskens together. He was a little ahead of me on that, but actually, when you see them together, it’s pretty amazing. It’s so natural, right? Theyskens Theory.”

The line will be presented from September in showroom appointments on the sidelines of the spring 2011 ready-to-wear shows, starting in New York. It is destined for sale in Theory’s signature boutiques worldwide, in addition to specialty stores and upscale department stores.

Those expecting to snap up cut-price Theyskens are in for a disappointment, however. Rosen expects to price the collection in line with, or higher than, Theory’s existing products.

Finding that price point, in a market still battered by the recession, will probably be key to the success of the line. Theyskens said he admired the collections Jil Sander has designed for Uniqlo, another division of Fast Retailing, but did not see himself in the same accessible price bracket.

“This joint venture between Jil Sander and Uniqlo is stimulating everybody. I think it’s really great,” he said. “But at the same time, I’m also a person who likes things well-done, ethically and in terms of respect for our industry, so I’ve also spent time on making sure all of this balances out. I don’t believe in going to the very bottom, because I think then it can raise other questions.”

Rosen acknowledged the market has become more demanding, but said this new collaboration could shape the brand for years to come.

“Certainly in our segment, in the clothing industry, the customer is not overconsuming, so they have to be inspired,” he noted. “I see this collaboration as an important step in the evolution of our company.”

Rosen added that although business was not back to 2008 levels, Theory was having the second-best year in its history. The brand has ambitious plans to grow from the current 1,000 points of sale worldwide, in line with Fast Retailing’s target of clocking overall group sales of $50 billion by 2020.

“There was such a dramatic change in the world and in our industry with the recession that I think that the requirement to not only be better than everyone else but to be the best is very strong,” Rosen said.

Whether the collaboration could lead to a more lasting partnership remains an open question. Both Rosen and Theyskens declined to be drawn on the subject, saying the speculation was premature.

Theyskens said he was ready to give the project his all but would wait and see how it evolved. “You would be stupid to work in fashion and decide things too much ahead of time,” he said with a wry smile.

“The capital idea is that Olivier can start something that doesn’t really have any boundaries. The boundaries that it has is the aesthetic of Theory, but we don’t have any business to protect — we have a lot of open space ahead of us,” he said. “I want to create something that myself and our company and Olivier are passionate about and inspired by, and who knows where that is going to lead us?”