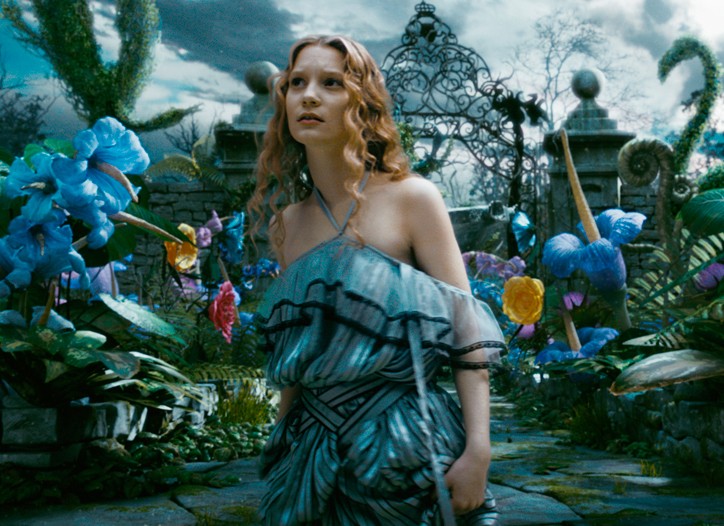 PARIS — When Donatella Versace was preparing her men’s collection for fall, she logged onto YouTube to check out trailers for the forthcoming science fiction film, “Tron Legacy.”

For Domenico Dolce and Stefano Gabbana, meanwhile, it was Giuseppe Tornatore’s “Baarìa,” which made its debut at the last Venice Film Festival and scored a Golden Globe nomination, that set the themes for its latest men’s collection so precisely that what paraded on the catwalk in January was echoed in “Baarìa” scenes projected as a backdrop.

Current and forthcoming feature films are influencing fashion to a blockbuster degree, with “Avatar” references sweeping through the spring couture collections in January and the release of Tim Burton’s Disney film “Alice in Wonderland” this week coinciding with a slew of product tie-ups and retail showcases, from windows at Bloomingdale’s in New York and Printemps in Paris to an “Alice”-inspired young women’s range hitting Uniqlo stores starting this month.

“Movies are always an inspiration: It’s a reflection of the times,” mused Versace, whose spring women’s collection, unveiled in October in Milan, was partly inspired by Burton’s anticipated new film.

“I had seen stills from the new movie, which were enough to fire my imagination,” she explained. “I am a big Tim Burton fan, and as soon as I heard he was working on this story, it was really easy to see how to do a take on his own surreal vision. It was really fitting for the times, too. Why not have some fun with fantasy?”

While old movies like “Breakfast at Tiffany’s,” “Bonnie and Clyde” and “Rear Window” have long inspired a swath of designers, the fixation with what’s showing now at — or coming soon to — the local Cineplex, is a new wrinkle, and a switch from fashion’s recent dalliance with contemporary art during the luxury boom.

“The reach of film via the cinema audience, but also via television, DVD and the Internet, far outweighs any other artistic medium — nothing compares to that sort of power,” said Linda Hewson, head of creative at Selfridges in London, which last week inaugurated an “Alice” concept shop in the Wonder Room of its Oxford Street flagship selling a range of products, from jewelry and clocks to beauty products and clothes by Alice Temperley. “Also, all these formats are by essence mainstream and inexpensive so they cut across all cultural and social divides,” said Hewson. “Showing fashion in movement — such as films can do — allows for a stronger emotional response from the viewer so films are naturally a powerful way to promote fashion.”

Indeed, fashion brands are starting to experiment with 3-D, with Fendi filming its Milan show last week with the new technology and Burberry live-streaming its London show in 3-D during London Fashion Week.

“No one has ever created a show so tied into a film,” Gabbana said just before staging the brand’s “Baarìa” show during Men’s Fashion Week in Milan in January, where models were even prepped by an acting coach. “We wanted to leverage on the emotional side.”

Disney is well aware of the commercial potential of “Alice” and has lined up product collaborations with Tom Binns, Stella McCartney, Urban Decay, Sue Wong, Swarovski, Isabella Fiore, OPI and others, along with product ranges at Chinese fashion retailer Ebase and the American chains Hot Topic and Kohl’s via Avril Lavigne’s exclusive apparel line, Abbey Dawn.

At Hot Topic, the first “Alice” product lines launched in November and “we have had several items sold out and many are on reorder to ensure enough merchandise is on shelf for the film release date,” said Pam Lifford, executive vice president, global fashion and home, for Disney Consumer Products. “Our revenue is on track with expectations.”

Disney follows a licensing model with film-related merchandise, granting designers use of its intellectual property in return for royalties.

“I think art, fashion and movies are increasingly speaking the same language, and movies in general are a massive catwalk of ideas,” said Charles Finch, the London-based media entrepreneur, chief executive officer of Finch & Partners and publisher of Finch’s Quarterly Review. He also cited “a confluence between the way that movies and brands are delivered to the public. What I am trying to do in my business is move beyond product placement, and have movies and brands work together — if their spirits are similar.”

For example, Finch’s client Fiat recently based a TV ad on Rob Marshall’s star-studded “Nine” — using images and music from the film. There was no Fiat product in the ad, but the movie summed up the feeling, design and energy behind the Fiat brand, Finch said. “Increasingly, it’s about the brand supporting events around the film,” he said.

“I know that, on many occasions, fashion has lent itself as an inspiration point for a lot of costume designers,” she said. “I know certainly Michael Kaplan, who is an amazing, well-respected costume designer who designed all the costumes for ‘Star Trek’ and for ‘Blade Runner,’ he loves fashion and it’s always a point of reference for him. So, for that to be reciprocated is awesome.”

Versace’s choice of “Tron Legacy,” another Disney property, was spontaneous, however, a Disney spokeswoman hinted, “We have a strategic plan in place to maximize these opportunities.”

Donatella Versace noted the two Disney films were only part of her inspiration, and neither her men’s nor women’s collection were a “complete homage.”

Still, the cyberpunk universe depicted in “Tron” or the “baroque world of optic illusions and micro patterns” that “Alice” evokes offers pure fashion escapism, she allowed. “People are so serious now with the current economic climate — big worries are always on the horizon,” Versace said. “The idea was like a breath of fresh air — space to be spirited.”

But when Gaultier saw the 3-D feature before the Christmas holidays, “I thought it was the most visually beautiful film that I had seen in a long time,” he said. “The depiction of nature was just in tune with one part of the collection that was inspired by the nature, vegetation and jungle. It was like synchronicity for me. And the feline creatures were so beautiful.”

He noted that one model in his show “could pass for a double of Zoe Saldana’s Neytiri character.”

Gaultier noted there would be no overt references to the film in his ready-to-wear show on Saturday. Still, he noted he wanted to become a couturier and present fashion shows, “from the moment I saw Jacques Becker’s ‘Falbalas’ with my grandmother when I was nine.

“I owe my vocation to films,” he said.