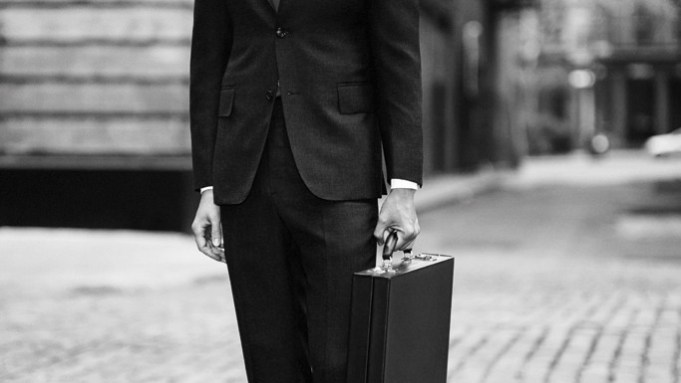 Thom Browne is launching a new line for fall 2014 centered around the classic gray suit — just don’t call it a commercial collection.

The designer, best known for his shrunken silhouettes and ankle-baring pant lengths, will introduce a line of suits, shirts, coats and neckwear with proportions that are “slightly less extreme” than his runway collection. Jackets will be more classic, a bit longer and the lapels will be slightly wider. Trouser length will be hemmed to the shoe with no break.

The line will be marketed under the name Thom Browne; the runway collection is named Thom Browne New York.

But the designer bristled when asked if this should be considered a commercial collection. “It will definitely reach more people,” he told WWD. “But the word [commercial] has negative connotations. It will still have the same quality as my collection, but it will broaden the business.”

He said the line is targeted at a man “who likes the personality of my clothing but wants a more classic proportion and fit.” This line meets that challenge, he believes. “It’s a true American collection for people who appreciate classic, well-made clothing.”

Browne said he has “wanted to do this for some time” and a recent beefing up of his internal staff has afforded him the time. “I finally have the resources to do it now,” he said.

Although the collection can be worn for business, it’s not just a business suit, Browne said. “It’s for a man who wants to look good, wear tailored clothing, likes fashion and wants something that fits really well.”

“I want it to be approachable,” he said, “but for the quality, it’s a good starting point.”

For the overcoats, Browne has created a ball-collar version as well as a chesterfield. Prices for these will start at $2,800.

Shirts will be available in spread-collar, point-collar and button-down styles, and they will be pressed and packaged in custom shirt boxes. Retail prices will start at $350. Browne said the shirts are not “washed and dried” like those in his runway collection.

The styling is based on traditional and classic American sensibility — core values the designer has become known for since he introduced his first collection in 2001. “When I decided to do this,” he said, “I wanted it to be able to stand on its own but still have the identity of Thom Browne.” The fabrics are “classic American” and “masculine,” he said, and will include step twill, wool flannel and worsted wool in a variety of weights to appeal to different markets. A made-to-measure component will also be offered.

The line will be sold in the men’s clothing departments of high-end stores. The Thom Browne New York label is generally hung on the designer floor. “I want it to sit on the clothing floor, not a fashion floor,” he said. He declined to mention specific names, but said the stores he will be targeting are those “who appreciate tailored clothing and can handle that price point. It’s not mass.”

The new collection will be made exclusively in the U.S., he said, declining to name the manufacturers with whom he is working.

Browne said he’s not expecting to add an even lower-priced offering to his arsenal. “This felt really good and right to me to expand the business in a natural way,” he said. “I think it will attract the same customer and a new customer who knows my collection but thought it was too much.”

Last year, the designer introduced a capsule collection called Thom Grey, a youthful, university-inspired sportswear line that was sold at Barneys New York, Harrods and other stores in Asia. Prices were significantly below that of the runway collection with outerwear selling for $795 to $1,100; jackets from $725 to $1,000; trousers for $325 to $550, and oxford shirts starting at $195.

Browne said Thom Grey was a one-year-only project and has been discontinued. “Sometimes success is not the best thing,” he said. “It worked really well, but we couldn’t keep up with the success. Someday we may look into it again.”

Browne launched his first ready-to-wear collection in 2003 and three years later signed on with Brooks Brothers to design its Black Fleece collection, where suits retail for $1,400 to $1,600. He also designs Moncler’s Gamme Bleu men’s collection. The designer sold a majority stake in his business to Japan’s Cross Co. in 2009 when sales were $6.3 million. He operates a shop in Manhattan’s TriBeCa neighborhood and in March opened his first store outside the U.S., in Tokyo. Browne said the plan is to eventually open more stores, but no other locations have been determined.