Thom Browne to Show in Russia

He will become the first American designer to show during next month’s Aurora Fashion Week in Saint Petersburg.

By Rosemary Feitelberg and Rachel Strugatz on March 14, 2012
View Slideshow 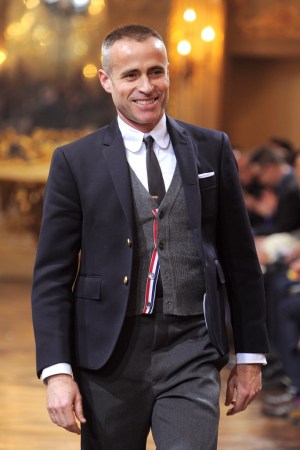 Thom Browne has a lot going on: He will become the first American designer to show during next month’s Aurora Fashion Week in Saint Petersburg, Russia, and he’s about to launch a new sunglasses line.

Browne’s show will close the event, which begins April 11. He will show on April 14, as part of Russian Seasons, a yearlong cultural exchange program that was set up by the U.S. Embassy in Moscow in 2009. “I am just really excited to represent the U.S. in this way. I think it’s a great honor to be able to do this,” Browne told WWD.

Aside from wanting to visit the Hermitage and the rest of Saint Petersburg, Browne is keen to build his label in Russia, where the brand is currently sold in a couple of stores. “It will be fun to see the response [to the collection] in a different place outside of Milan, Paris and New York,” he said.

Browne’s show will feature 20 looks from his men’s line and 20 from his women’s and will be reminiscent of recent ones. While some of the details are still being sorted out since the venue was prearranged, don’t expect the designer to tone down his presentation for the Russian crowd. Executives at the Russian lifestyle magazine Depesha, which first approached Browne about getting involved, are familiar with what he does in his runway shows. “I think that’s why they wanted me to do it,” he said. “It’s not as though I’m doing anything crazy. But I guess that’s relative.”

Stephan Rabimov, editor in chief of Depesha, which is handling the American program at AFW Russia, said, “Thom being a quintessential American designer made him a natural choice. Our audience has come to expect a merger of fashion and art. Thom is known for that.”

AFW will feature more than 40 shows and presentations from designers from Europe, Asia and the U.S. With more than 20,000 visitors expected, AFW Russia will be ranked among Eastern Europe’s top three fashion weeks. Leonid Gurevich, an emerging Russian designer who is a Fashion Institute of Technology graduate, will be the other New York-based designer participating.

Thom Browne will introduce three styles of women’s sunglasses through a licensing agreement with Dita Inc., which the designer calls “ready-to-wear interpretations of past eyewear concepts” that appeared in previous runway shows.

Inspired by the Forties, Fifties and Sixties, silhouettes include a round shape, an exaggerated cat eye and an oversize square frame that each come in three colorways (black, tortoise and navy and white). They possess the brand’s signature tricolor temple tips. All three styles retail for $475 and will hit Thom Browne stores and Barneys New York in May.