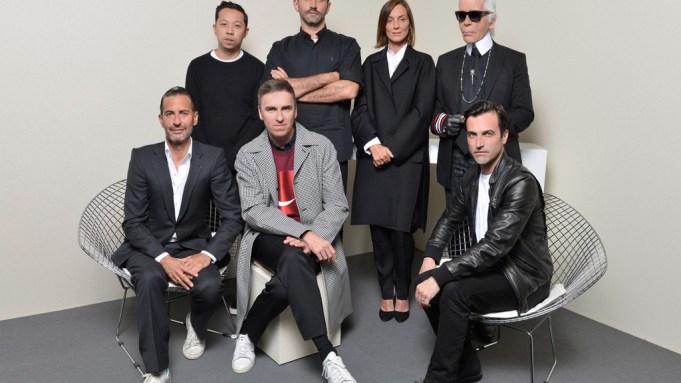 PARIS — Thomas Tait was crowned the winner of the inaugural LVMH Young Fashion Designer Prize, a project that has shone a spotlight on a swath of indie labels and their challenges.

“Congratulations,” said a beaming Delphine Arnault as she handed the slender Canadian women’s wear designer a golden helix of pearls wrapped around a star. The trophy by artist Jean-Michel Othoniel comes with a cash prize of 300,000 euros, or $409,270 at current exchange, plus a year of coaching from LVMH Moët Hennessy Louis Vuitton executives.

Arnault said the winner was selected on the basis of talent, creativity and potential for development.

Tait said the funds and advice would be a major boost for his London-based label, which sells to about 10 specialty stores.

“It really will benefit every area of the business,” he told WWD, flanked by models in his minimal, otherworldly dresses. “Financial struggle is something I’m very familiar with as an independent designer.”

The announcement was made at LVMH’s headquarters here after 11 finalists had made individual presentations to a jury stacked with the conglomerate’s designers. It was an Instagram moment of historic proportions as Karl Lagerfeld, Marc Jacobs, Nicolas Ghesquière, Raf Simons, Phoebe Philo and Riccardo Tisci, along with Kenzo’s Humberto Leon, stood in a row for photos.

“He’s an artist in a way,” Lagerfeld said of Tait. “He sketches very well, and as you know, I like sketches.”

Tait is already something of a designer’s designer with his innovative pattern-cutting, exaggerated silhouettes and occasional Bauhaus and Constructivist touches. Architect Zaha Hadid is among aficionados of his sculptural, yet streamlined clothes.

A native of Montreal and a graduate of its Collège LaSalle, Tait went on to receive an M.A. in fashion from London’s Central Saint Martins. He has shown his collections during London Fashion Week since 2010, when he won the inaugural Dorchester Collection Fashion Prize.

Arnault, the force behind the initiative and a key talent scout at the luxury group her family controls, also sat on the jury, along with Pierre-Yves Roussel, chairman and chief executive officer of LVMH Fashion Division, and Jean-Paul Claverie, adviser to LVMH chairman and ceo Bernard Arnault.

She surprised the audience of assembled journalists and LVMH bigwigs by unveiling two additional jury prizes, each greeted with a roar of applause.

Shayne Oliver, the designer behind the New York label Hood by Air, and Miuniku, by Mumbai-based sisters Nikita and Tina Sutradhar, are each to receive 100,000 euros, or $136,400, plus a year of mentoring.

Julien Dossena, initially among 12 finalists with his brand Atto, was disqualified from the competition when he decided to shutter the nascent label and focus on his work as creative director for women’s wear at the Paco Rabanne fashion house.

Arnault also handed out 10,000 euro ($13,640) scholarships to three fashion graduates, who each get a one-year post in the design studio of a fashion house at LVMH, home to such brands as Fendi, Loewe, Pucci and Donna Karan.

The winners are Peter Do from Fashion Institute of Technology, who is bound for Céline; Teruhiro Hasegawa from Central Saint Martins, who will work at Givenchy, and Flavien Juan Nuñez from La Cambre in Brussels and the Institut Français de la Mode in Paris, who is to join Simons at Dior.

Arnault noted that each school that produced these graduates is to receive 10,000 euros to “symbolize LVMH’s support” of education that encourages fashion renewal and excellence.

There were moments of nerves and excitement earlier in the day as jurors trickled into the LVMH courtyard, where the finalists displayed their designs in a showroom setup. Assistants in Rocha’s booth carefully brushed dark coats with a lint roller.

Finalists were unanimous that the prize brought a windfall of attention and professional contacts, critical currencies in a competitive industry dominated by giants.

“It’s been exponential, really,” marveled Gelinas, two seasons into his CG line after working behind the scenes at Marc Jacobs, Proenza Schouler and Balenciaga. “The biggest challenge when I started was visibility, because in New York there’s a saturation of labels.”

He said the two-step judging process, with an expert panel whittling down from 30 finalists during a Paris showroom session in February, brought a deluge of sample requests and opened doors to key retail contacts, who have confirmed appointments to preview his spring 2015 range.

“It can really change the trajectory of an emerging brand,” Gelinas said.

The panel — roughly 40 prominent figures from retail, publishing and image creation, including Marigay McKee of Saks Fifth Avenue; Sarah Andelman of Colette in Paris; Natalie Massenet of Net-a-porter; stylist Olivier Rizzo; makeup artist Pat McGrath, and art director Fabien Baron — each voted for their 10 favorites, and a four-way tie bumped up the number of finalists to 12.

“This has been like fuel for us,” said Tina Sutradhar, revealing plans to move their business from Mumbai to London, and start showing in the English capital as early as February. “It’s really motivated us to see what’s out there and pushed us to raise the bar.”

The graduates of London College of Fashion are among designers tapped by Vogue Italia to produce a capsule collection for Pepsi, and they will travel to Dubai to present their designs next spring. “It gives us a lot of hope for the future,” Sutradhar stressed.

“It’s good to know that you’re being heard, and people are taking your work seriously,” said Oliver, confessing that the LVMH recognition changed his perspective, earned him more credibility at home, and prompted him to “take it more seriously.”

He said Hood by Air has been invited to show during Paris Fashion Week this fall. The plan is to present “wardrobe essentials” during New York Fashion Week and “artisanal, directional items” in the French capital.

“We have double the press requests we had before,” marveled men’s wear designer Tillmann Lauterbach, who plans to show his spring 2015 collection in Milan rather than Paris next month.

Participating designers cited a warm camaraderie among their peers, and they relished the chance to share war stories.

“Everyone is under pressure, no matter where they are,” said Rocha, a rising star in London whose most recent collection riffed on Elizabeth I. “It’s great to meet all your peers and you can see everyone striving for the same thing.”

Echoing other designers, Rocha said the prize has highlighted how “young designers all over the world have the potential to grow into serious labels.”

In a separate interview earlier in the day, Tait confessed that he was not aware that there were so many independent labels. “It’s nice to see this network of fashion around the globe,” he said, also hinting that the LVMH exposure yielded “some external projects.”

These are vital to support nascent labels, with German-born, Paris-based Lauterbach noting he recently took on a consulting gig in Korea, in addition to the work he does for Chinese brand JNBY, to support his signature line.

“When you start as an independent designer, you struggle. I did it,” said Tisci, who ran his signature label on a shoestring before being plucked from obscurity in 2005 and named the couturier at Givenchy at age 30.

Asked what guided his choice for the victor, Tisci had one word: “Emotion.”

Underscoring the popularity of such fashion contests — and suggesting budding talents are hungry for funding and business advice — 1,221 designers applied for a chance to win, as reported.

The LVMH competition is unique in its global scope, online-only registration and nomination process, plus a gradual elimination process. The competition was open to any designer between the ages of 18 and 40 who has presented and sold at least two collections of women’s or men’s ready-to-wear.