The 6,804-square-foot unit on on New Bond Street is enriched with design pieces and artwork. 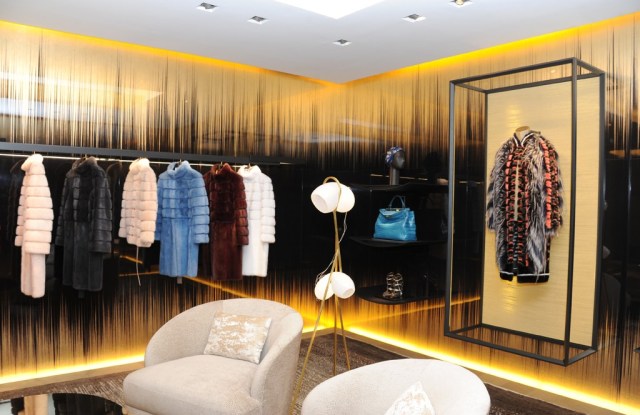 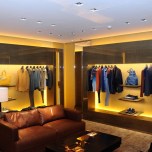 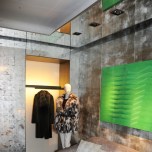 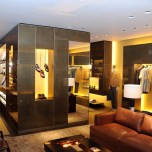 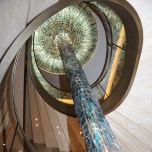 Located in a 19th century building with a brick and terra-cotta facade in a Flemish style, the store opens today and marks the launch of Fendi’s new men’s retail concept in a nod to the British capital’s storied men’s tailoring tradition.

The company worked on the unit, previously an antique store, for 18 months, redesigning the space with architect Gwenael Nicolas, to also use the basement and the two “striking” bow windows on New Bond Street, said Beccari.

He was enthusiastic about London and the opportunities it offers. “It is one of the best destinations,” said Beccari, pointing to “the latest developments” in the city, including many high-net-worth individuals from abroad moving there, citing “Russians, Indians, Arabs, French and Italians” as new Londoners. Referring to a recent news story he had read, Beccari said, “At least 20 skyscrapers are being built, which will make for a different skyline and many residential spaces from here to 2020” — and more potential Fendi customers.

He declined to reveal sales projections.

As for the current environment for luxury brands like Fendi, Beccari conceded there are “several uncertainties” in terms of global social and political unrest. “It’s not a simple situation, but this has always happened, there has never been a historical moment when all was smooth. I think it is important to be aware of the delicate moment, but we have the potential to do better. People love to please themselves and buy luxury goods, and I hope that by yearend we will be the ones that have gained market share,” the ceo said.

Beccari is also leveraging the brand’s men’s wear division. The category currently accounts for below 20 percent of Fendi’s total sales and Beccari believes it still has “a lot of potential.” He referred to the successful launch of the men’s version of the Peekaboo bag in January, which has “become a signature” piece.

“Men are increasingly aware of fashion and they are more at ease with being trendy,” he said.

The executive is targeting the growing number of Asian consumers — still mainly men — who are increasingly wealthy and who are “vital” for luxury brands. The men’s wear area in the new store’s basement combines lacquered elements, wood and leather.

Several design and art pieces stand out in the site, which is rented for 20 years. Examples include a dedicated bespoke piece by Paris-based designer Maria Pergay consisting of a tree in steel, pyrite and featuring “foliage” in leather and crocodile; tables by brothers Fernando and Humberto Campana and by French architect Thierry Lemaire; a table in brushed bronze and mahogany by Italian architect Massimiliano Locatelli in the fur room, which has black Japanese lacquered walls and gold and bronze highlights; a chair in Fendi Selleria leather by designer Marc Newson in the handbags area; a work by Humans Since 1982 called “A Million Times 72”; carpets by American artist Haynes Robinson; a painting by Italian artist Agostino Bonalumi in the VIP room, and several photographs of Roman fountains taken by Karl Lagerfeld for the project “The Glory of Water.”

The flagship harks back to the brand’s Roman roots, and travertine, traditionally associated with classical monuments and architecture, is the main element in the store, together with leather, bronze and stone. A dark stone flooring with intense blue highlights marks the ground floor. Staple Fendi elements are featured: The Baguette Wall and the Selleria Room lined with precious Cuoio Romano leather, and which houses the made-to-order service. Beccari also proudly referred to the staircase’s more than 32-foot-high Murano chandelier comprising more than 5,600 pieces of handmade glass with blue highlights.

Fendi’s existing boutique on Sloane Street will not be closed, and the brand is also available at Harrods and Selfridges. “This was a piece of the puzzle that was missing, and we wanted to show to ourselves and others that we still have many [growth] possibilities,” remarked Beccari.

The company plans to reopen at Galeries Lafayette on Monday; to open a new boutique in China’s Chengdu on May 25; to expand its Landmark Hong Kong unit, and, by yearend, to open in Shanghai’s Plaza 66 and in New York at 57th Street and Madison Avenue, closing the existing Fifth Avenue boutique.

To mark the London opening, Fendi is launching a charity project in collaboration with a number of high-profile women including artist Tracey Emin; actresses Gwyneth Paltrow and Naomie Harris; models Cara Delevingne, Jerry Hall and her daughter Georgia May Jagger; architect Zaha Hadid; fashion illustrator Tanya Ling; singer Adele, and journalist Kate Adie, who will customize the brand’s women’s Peekaboo handbag. The personalized items will be displayed at the flagship from Friday and will be available for purchase through a dedicated online auction at fendi.com/peekaboo-auction from today to May 30 to raise funds for the London and Bristol-based Kids Company.

The handbags will be “ironically displayed inside luxurious vending machines,” Beccari said, in windows in matelassé black crocodile leather contrasting with golden velvet — also seen in the vending machines with dark glass and golden lacquered frames and lit up by a large “Peekaboo” neon sign.