Threeasfour and Yoko Ono Put Their Minds Together 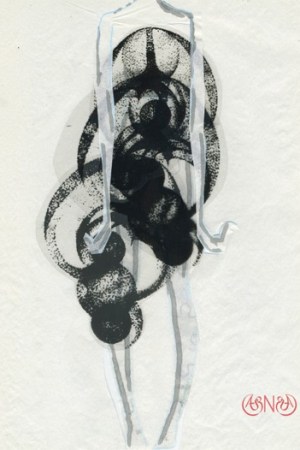 NEW YORK — Threeasfour’s Gabi, Adi and Ange have designed as a trio for several years, but for their spring collection, they have found themselves a fourth partner: Yoko Ono.

Ono not only served as a muse to the designer collective — whose collection, “Iconoclastic,” is billed as an homage to the artist, musician and performer — she collaborated with the trio, who worked with her to translate some of her rarely seen dot drawings into prints for pieces.

In a telephone interview, Ono said she has always seen a synergy between fashion and art, and addressed it in her book, “Grapefruit: A Book of Instructions and Drawings.”

“I was always interested in expressing art through clothes,” Ono said. “I think there is an incredible connection. It’s almost like sculpture, but you can wear them.”

The design sensibility of Threeasfour, which is best known for its signature curvilinear construction, seems to apply to Ono’s philosophy.

“I met them at a concert I was giving in my loft,” Ono said. “They seemed to be extremely interesting designers.”

According to Gabi, Adi and Ange, it was love at first sight. “Yoko was always and is our hero and muse,” Adi said. “We admire her work and music, and once we went to her studio and saw all these beautiful black-and-white drawings, we thought we should do something together.”

The collaboration features looks in shades of black, white and ice blue, which mirror the colors of the sky, and is meant to evoke Mother Nature — a theme that serves as an inspiration to both Threeasfour and Ono.

“It seems the energy was flowing between her team and us,” Gabi noted. “She comes more from the art and music world and is a performer, which are all elements we identify with.”

Gabi added the design collective was also drawn to the idea of bringing Ono’s aesthetic to a wider audience, offering the pieces at lower prices. Where Threeasfour fashions typically retailed for more than $1,000, this collaboration will have suggested retail price points from $111 to $888, or wholesale price points from $44.44 to $444.44.

Ange said bringing the collection’s prices to a contemporary level was a way to extend the trio’s vision, make it more inclusive and target a broader audience, while also responding to the current economic climate. “We like opening up and catering to all sorts of people out there,” Ange said.

As for Ono, she likes what she has seen of the collection so far. “I think there is a little edge to it, and I love that edge,” she said.

On Sept. 21, Ono will release a new CD, “Between My Head and the Sky,” which she produced with her son, Sean Lennon. She and Lennon are also working on music for the Threeasfour show at Mac & Milk on Sept. 17, and are expected to use music from the new release for the presentation. Ono plans to attend the show.

Asked whether the collaboration could inspire her to add fashion designer to her résumé, she responded with a laugh. “I think it is much nicer when you are making a slight difference by somebody else touching your art and participating and adding creativity,” Ono said. “I like that.”