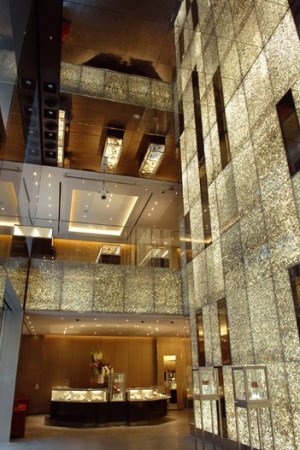 TOKYO — A global recession might be on the horizon but that’s not stopping the building boom here.

Hennes & Mauritz is prepping its second Japanese store, a megatower in Harajuku, for this week’s opening. Last Friday, Stella McCartney opened its first freestanding boutique in Japan, in the Aoyama district near Miu Miu and Prada. Raf Simons, Neil Barrett, Jimmy Choo and Diane von Furstenberg are just a few of the other brands that recently established new outposts in Tokyo.

Tiffany & Co. president James Quinn acknowledged the challenges his company and other luxury players are facing in a mature, stagnant market like Japan, but stressed the importance of overhauling the American jeweler’s 11,988-square-foot flagship, even in the current climate.

“There’s a remarkable amount of competition and I don’t think there’s any stronger retailing center in the world than Ginza, so you really have to be on top of your game,” Quinn said.

“[It’s] a dramatic new facelift for us, but I still think the essence of the brand has been well interpreted and communicated and designed,” Quinn said.

The new store, just off the famed intersection of the Chanel, Bulgari, Cartier and Louis Vuitton flagships, carries Tiffany’s full product range of jewelry and gift items, from silver charm bracelets to a one-of-a-kind heart-shaped diamond ring weighing in at 11 carats and bearing a 287 million yen ($2.9 million) price tag.

Kashiwa Sato, the creative mind behind Uniqlo’s innovative stores in Harajuku and Manhattan, developed Eight Million’s look. The 3,692-square-foot store on two-levels features a generous use of oak accented with stainless steel and glass. A high-end hair and beauty salon occupies the third floor of the building.

Terada said he wanted to create a store that was distinctly Tokyo without riffing on visitors’ entrenched notions of Japan’s exaggerated street fashion. “When my friends like Paris [Hilton] and Beyoncé [Knowles] come to Tokyo, they always want to go to places like Shibuya 109 or places like that,” Terada said, admitting his own company is guilty of feeding into the frenzy with its line of cute, girly handbags.

Speaking of Knowles, the singer, in town to promote her new album, put in a brief appearance at the store Friday with her sister Solange. The pair are two of the many celebrities who have designed a line of handbags for Samantha Thavasa, although those products can’t be found in Eight Million. Terada is keeping the handbag brand’s distribution and his new luxury multibrand concept separate.

“When you think of Samantha Thavasa, you have this image of something sparkly and cute,” Terada said. “This new store will completely reverse that image.”