The jeweler has opened a flagship at number 62, marking its most important overseas opening this year.

By Joelle Diderich on May 6, 2014
View Slideshow 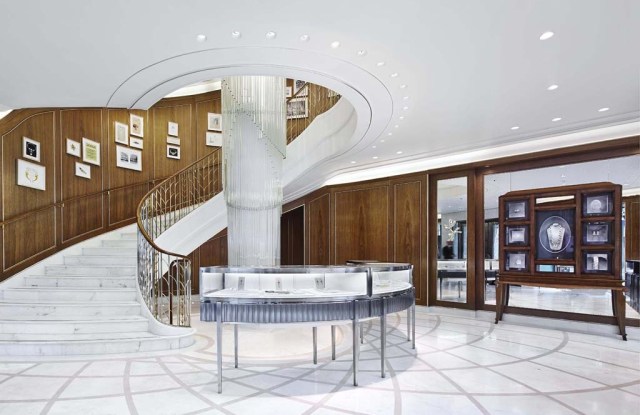 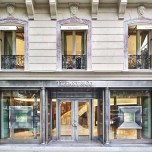 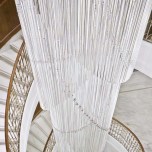 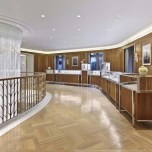 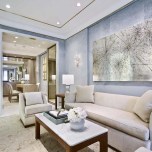 PARIS — Tiffany & Co. is bringing fresh sparkle to the Champs-Élysées.

The jeweler has opened a flagship at number 62, marking its most important overseas opening this year and joining Cartier as one of the most eminent jewelers on the famed thoroughfare.

The corner building, located on the sunny side of the street, spans 10,765 square feet over three floors showcasing Tiffany’s high jewelry, fine jewelry, celebration rings and fashion jewelry, alongside accessories including sunglasses.

Marc Jacheet, managing director for France and Benelux at Tiffany & Co., said the project was five years in the making. The building, formerly occupied by fast-food chain Quick, was completely gutted and rebuilt over the course of a year in a spirit that melds the house’s New York roots with its exceptional location.

“The story of this store is New York Art Deco meets Parisian chic,” said Jacheet, standing between the store’s three-ton stainless steel door and a staircase curving around a 50-foot chandelier that incorporates 1,837 glass rods — a nod to the company’s founding date — that evoke the bugle beads on a flapper skirt.

“The Champs-Élysées is the most beautiful avenue in the world,” he asserted.

“There are plenty of other magnificent places, but this has a special aura because it’s Paris, because it’s the city of fashion and creation, and France is the world’s top tourist destination with 83 million visitors a year. You have 100 million people walking down the Champs-Élysées every year,” he added.

The new flagship, Tiffany & Co.’s fourth point of sale in the French capital, is designed to increase the jeweler’s visibility in Europe and further afield. Jacheet would not disclose the cost of the store or sales projections, but said it represented a “significant” investment.

“Of course we have strong ambitions and the Champs-Élysées must be and will be one of our key stores,” he said. “Europe still has important growth potential for us, also in terms of openings.”

The store unfurls as a series of spacious areas featuring floors made of Carrara marble or French oak, and wall panels carved from a single Canadian walnut tree.

The story of the brand is told through an interactive screen near the entrance and framed pictures dotted throughout the space, which highlight Tiffany & Co.’s long-standing ties to Paris, where it first opened a store in 1868.

Design details aimed at accentuating the luminosity of the space include a chandelier and wall lamps in the shape of magnolias designed by New York-based artist Michele Oka Doner, and guardrails incorporating a stylized leaf motif in three metallic shades.

The store carries products ranging from an Eiffel Tower charm priced at 170 euros, or $235 at current exchange, to an 11.2-carat diamond ring that retails for 1.9 million euros, or $2.6 million.

There are three private salons and a library on the top floor that will shortly play host to the famed Tiffany Yellow Diamond, which will be on loan to the Paris store for a limited period to fete its official inauguration on June 10. Jacheet noted this was especially appropriate, as the stone was originally cut in Paris in the 19th century.

Tiffany & Co. will also unveil a series of exclusive high jewelry pieces to mark the occasion. Jacheet was sanguine about the prospect of showing such high-value items in a store without an air-lock entrance on one of the world’s busiest streets, at a time when the French capital has been plagued by high-profile jewel heists.

“I think you have to consider those issues with a lot of calm, distance and professionalism,” he said. “We are doing what needs to be done — and I won’t reveal any details — to make sure we can do our job, which is to make our customers happy.”

The executive said that while the economic situation in Europe remains “difficult,” he was upbeat about the brand’s prospects. “I think we are lucky to operate in a sector that is fairly immune to the crisis. Why? Because people always have nice things to celebrate,” he said.