Designer infuses a sense of sporty athleticism and technical details into his new men’s wear collection. 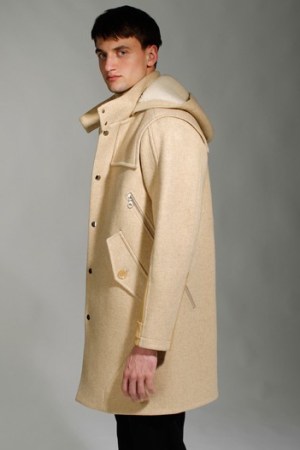 With a resume that includes stints at Bogner, Adidas and Ralph Lauren’s RLX performance line, it’s not a surprise that designer Tim Coppens infuses a sense of sporty athleticism and technical details into his new luxury men’s wear line. However, the Belgian-born designer uses zippers, ergonomic seaming and compression fabrics in subtle ways that are far from gimmicky.

“I’ve always been interested in the construction of objects and the three dimensional aspects of garments,” explained Coppens, who will launch his first collection exclusively at Barneys New York this fall. “I’m using seams to accentuate collars or shoulders and I’m constructing the seams from front to back, not just up the sides.”

Coppens left his job as design director at RLX in February to launch his own men’s label. He was quickly snapped up by Stella Ishii, owner of The News showroom, who has an eye for emerging talent, having played a role in the germination and growth of labels like Alexander Wang, Band of Outsiders and Vena Cava.

“His clothes were so fresh and innovative but in a very natural way. You could see this interesting mix of design sensibility that obviously came from his Belgian heritage and a sporty utilitarian side that came from his years of working as a designer for Ralph Lauren,” said Ishii. “It had all the elements and sophistication of someone who really knew what he wanted to do. You could also sense speaking with Tim that he was someone who was ready and had the discipline to launch his own line.”

Coppens is self-financing the collection for now and working out of the apartment he shares in New York with his wife, who is a marketing manager at L’Oréal. Born in 1975 in a small town outside of Antwerp called Moerbeke-Waas, Coppens is a graduate of the prestigious Royal Academy of Fine Arts in Antwerp, where his classmates included Kris Van Assche and Bernhard Willhelm.

An avid skateboarder and snowboarder, he migrated to Barcelona after graduation to soak up the skateboarding culture there, working freelance graphic design jobs for companies like Custo Barcelona. He moved to Germany to work for Bogner and then Adidas, leveraging his enthusiasm for board sports, before being recruited by Ralph Lauren and moving to New York.

After three years in that position, Coppens decided to strike out on his own. He has been encouraged and aided by Belgian friends like casting director Natalie Joos and fashion editor Tom Van Dorpe. “New York has an incredible infrastructure for designing and actually producing a collection and there are so many young people doing it here,” noted Coppens. “I think it’s much harder in other cities, even somewhere like Paris.”

Outerwear is a key category in the fall lineup, with leather insets bringing a hard edge to an otherwise softly luxurious duffle coat, for example. “I make classic pieces, like a parka or trenchcoat or bomber jacket. I don’t make shapes that are strange — but I’ll do something different to them,” he said.

Barneys has picked up the line exclusively this first season at its Madison Avenue flagship, said Jay Bell, vice president and divisional merchandise manager for men’s designer collections and contemporary sportswear. “His coats are technical feats of pure design. Seemingly simple coats are darted and seamed in unexpected places, creating new and modern volumes,” noted Bell. “Tim’s classic palette of camel, navy and black allows the design of the garments to shine through.”