The Belgian designer took home the award that was presented at an event during London Fashion Week.

By Samantha Conti and Stephanie Hirschmiller on February 18, 2013
View Slideshow 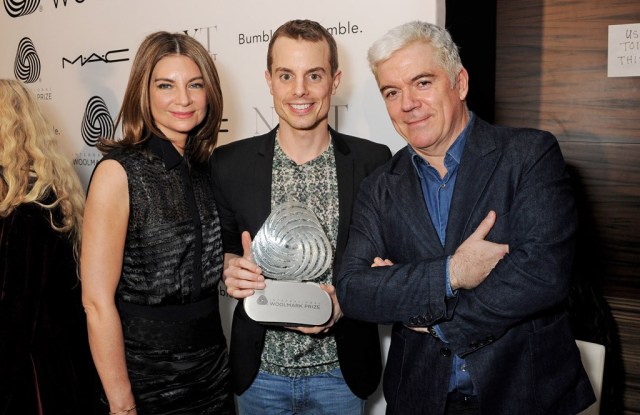 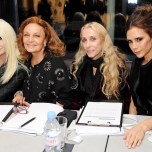 The Belgian Wijnants joined the ranks of those two legendary designers by winning the International Woolmark Prize here over the weekend. The designer said he challenged himself to create something new and fresh using only one yarn, hand-knitting it so “you get to really feel the material.”

Wijnants explained that the Japanese shibori tie-dye technique he employed proved extremely laborious as one generally uses very hot temperatures. “I like the idea of taking a risk,” he said. “We didn’t quite know what to expect, so it was very exciting.”

The ceremony was held at London’s glamorous new ME hotel, and the competition’s five other finalists — Australian Dion Lee, American Sophie Theallet, Ban Xiao Xue from China, Pankaj and Nidhi from India, and Takeshi Kitazawa and Emiko Sato from Japan — also showed their specially designed collections before a panel made up of Diane von Furstenberg, Donatella Versace, Franca Sozzani, Tim Blanks and Victoria Beckham.

Wijnants received 100,000 Australian dollars, or $105,000, and his winning collection will be carried next fall in top retailers around the world, including Bergdorf Goodman in the U.S., Harvey Nichols in the U.K., 10 Corso Como in Italy, Joyce in China, Eickoff in Germany and David Jones in Australia.

The global fashion competition recognizes creativity in merino wool. It aims to develop the next generation of fashion talent and to highlight wool’s eco credentials.

In an interview prior to the award presentation, Woolmark Co. chief executive officer Stuart McCullough said his job is straightforward. “Sell more wool,” said the executive, who works on behalf of the 60,000 Australian sheep farmers who supply 80 percent of the world’s apparel wool.

The straight-shooting Australian said the farmers really only care about two things: “what falls out of the sky — which I have no control over — and their annual wool check,” or the money they receive each year from production. McCullough said that if the farmers don’t see enough returns from wool, they will turn their land over to alternative crops.

The Woolmark Co. plans to increase its marketing spend for the 2013-14 period to more than 35 million Australian dollars, or $36.1 million, while the International Woolmark Prize — first handed out in 1954 — will go on for at least another two years.

Lagerfeld and Saint Laurent won the first Woolmark prizes, for a coat and a dress, respectively.

The 2014 prize will take place in Milan, while the following one will be in Paris, where The Woolmark Co. has just opened an office. “We’re not keen to see this prize just come and go — it’s got its own life now, and we’re committed to it,” said McCullough. “And emerging talent is so important to us.”

One of the great challenges going forward, McCullough said, is the U.S. market, where consumers buy one-third the amount of wool per capita that their European counterparts buy and where many still see wool as hot, uncomfortable and scratchy.

“There is a lot of upside to the U.S. market, because they are underconsuming,” McCullough said. “Our aim there is to shock the consumer with the [soft] handle of wool, and we’re already promoting it in the hunting, fishing and outdoor markets.”

With regard to emerging markets, McCullough said it’s “game on” in China, where wool is viewed as a luxury among affluent customers. “There is no resistance in the market, and they see it as a luxury product at great value,” he said.

The current per-kilogram price of wool is 11 Australian dollars, or $11.37, and McCul­lough said that prices and volumes have remained stable for the past two years. “It’s a decent price right now, and it seems the market wants to settle at that figure — but I think we can double it,” he said.

Meanwhile, Wijnants has no time to rest on his laurels as his Paris catwalk show on Feb. 28 is less than two weeks away. “I’m heading straight back home to Antwerp as there is lots to prepare,” he smiled.